It’s been a busy week! Had a great visit to ‘A Splash of Colour’ at Bowery Visual Arts with a friend, two sessions experimenting with etching at The Art House, and today I started a new painting in the studio. […]

Figures on a Raft with UFOs (after Théodore Géricault and Brian Rea) Oil on Canvas 230mm x 300mm (approx) Today’s picture is, like yesterday’s, a small one which is in contrast to the two sources I’ve placed together. The more […]

Waving at Ideology Oil on Canvas 200mm x 200mm This small painting is probably finished. The waving figures are taken from a photograph taken when the Berlin Wall was being built and the background is a version of Velazquez’s View […] 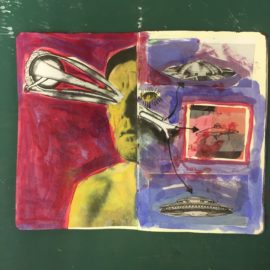 A place to log images – mostly oil paintings – and the thinking that drives (and emerges) from them.

Moving the two large work-tables from the studio in Enköping to the one in Uppsala last Friday felt definitive. Up until then I had been kind of camping out in the new studio. Having appropriate furniture and fittings may not […]

Tomorrow is the first day of the four day children’s summer school and I am both excited and nervous. It has been a year since I last ran a workshop and I am feeling out of practice. I am pretty […]

I remain convinced that I think differently under a white ceiling … or between white walls. No matter, I enjoy the feeling of light and space – no doubt enhanced by the generous distance between the studio window and […]

After my formative assessment with Jane 06/05/21, it was suggested I approach my documentation of my installations with a better scope of the space. This is something I have mentioned before and began to approach within my Moving around film. […]

I have experimented a lot for the exhibition proposal and it was good to have feedback on all of the pieces I have done. I did a small presentation of all the work I have created for the proposals so […]

The progress of my exhibition proposal has been going well, I have continued the exploration of using the studio at uni further this week by working larger and also by involving actual cellophane more into the space, like the digital […]

Hi, I’m sadly leaving my studio space and my landlords are doing a dreadful job of making it findable to artists on a budget. So I thought I’d tell you about it here in case anyone knows someone on the […]

A good day at the end of a good week. I was looking for a box of pastels that I am sure that I have somewhere, I didn’t find the pastels, or rather – before I found the pastels – […] 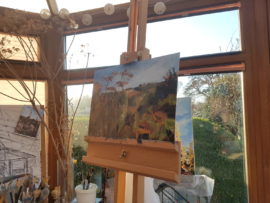 This week on the blog, I calm down and get reflective after a month or two of slightly frenzied painting output.
And actually get around to writing on my blog.
I know. It’s been a while.

The past week has been a bit rough – glad to be back on treatment but the drugs are strong. I must have slept for 12 hours on Friday. Before starting the new (old) chemo drugs I did manage a […]

As soon as lockdown was announced I endeavoured to adapt and continue developing my artistic practice as much as possible. What actually happened was I ended up playing with Lego. In fairness I began in earnest; visiting my studio at […]

Notes from a small town: Wednesday 22 April 2020 Until a few weeks ago I expected to be in Stockholm at this time, not just in Stockholm but at Supermarket Art Fair. Instead I find myself in here the small […]

I spent the last few days embarking upon that most arduous of tasks – sorting out my studio space. It was a curiously cathartic process which saw me tidy away my array of pencils, pens and paintbrushes; making way instead […] 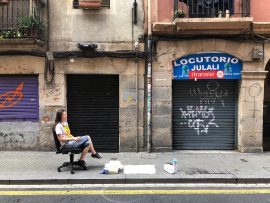 Six months at BilbaoArte supported by an AN Bursary