A good day at the end of a good week.

I was looking for a box of pastels that I am sure that I have somewhere, I didn’t find the pastels, or rather – before I found the pastels – I found several bags of glass seed beads that I had forgotten about. I spent the rest of the day playing with them. 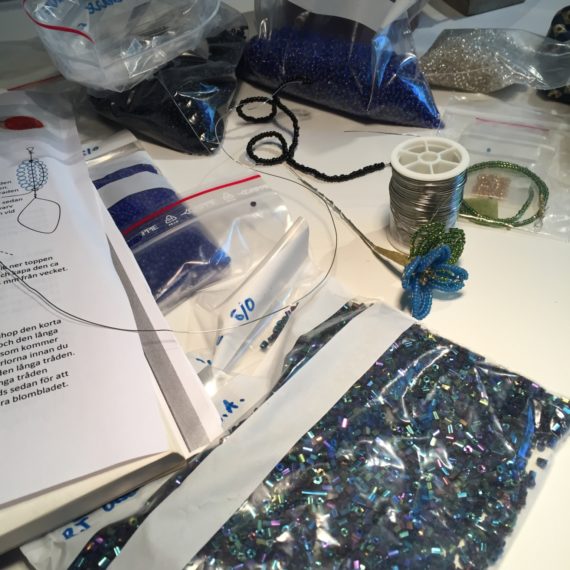 It was a very fitting end to a week where I continue(d) to think through how to be less prescriptive.

I really do want to make some abstract things and see if they satisfy me. Finding a starting point has been stumbling block. Stumbling upon the beads and a roll of wire thread seems to have unblocked me. I enjoyed making two small abstract forms: the first black, the second blue.

Earlier in the week I spoke with Elena Thomas, she had asked me to look at a draft of a funding application. It’s something that she has asked me to do before but this time we spoke with each other rather than just sending emails and attachments – over the recent months speaking on Skype or Zoom has shifted from being a way of keeping in touch with friends and family in the UK to being part of my working process. The discussion that we had was so much richer than it could have been had we stuck to written communication. In addition to specific points in Elena’s draft we spoke about the importance of talking things over and through with other artists. Chatting with other artists is definitely something that I miss. The lack of it is, I am sure, what has led me to sit on so many committees and participate in so many artists’ projects. It did not matter that we were talking about Elena’s project rather than mine, the discussion give me a great deal to think. While speaking about another of Elena’s projects – The Drawbridge – I made an almost throw away comment that I find drawing difficult (I don’t want to draw real things and don’t know how to draw abstractly). Elena’s immediate reply was to get a roll of steal wire – a material that she is using to create wonderful three-dimensional drawing.

That is why I was looking for the pastels this morning. I thought that working large with them might satisfy my craving. What I found instead were tiny beads and (funnily enough) thin steal wire .. and my craving has been more than satisfied.