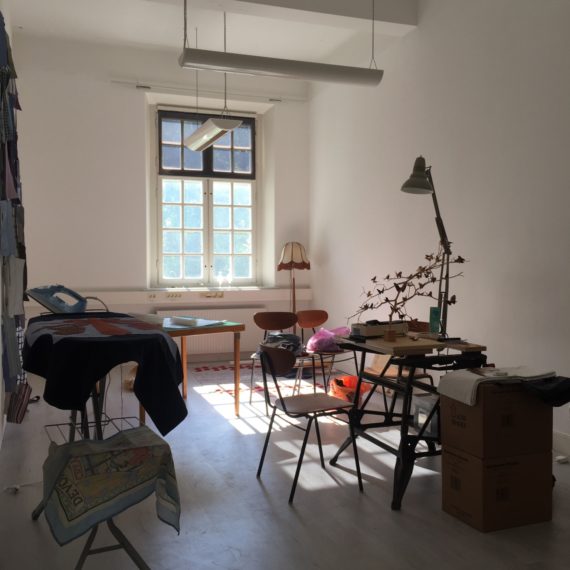 Tomorrow is the first day of the four day children’s summer school and I am both excited and nervous. It has been a year since I last ran a workshop and I am feeling out of practice. I am pretty sure that everything will be fine but I am nervous – which is perhaps no bad thing, it will keep me on my toes.

The summer school is part of my work for the local council, and is a new way of working. I have wanted to do something like this since I started back in 2017, and it is the situation with Covid-19 that has enabled me to try it this year. Normally I have to run drop-in activities suitable for all ages and all abilities. This year we are required to limit the number of participants and they have to book a place for all four days. It will be really interesting to see how both the children and I get to know each other over our time together.

Hopefully working practically will shift my mood about my job. I continue to struggle with it and how far it is from what I would prefer to be doing – being in my own studio. Actually it is not just that. I want to be working with other artists. I was reminded of this on Thursday when I had five meetings with different artists about different projects. The day was really good fun, I felt inspired, enthused, and encouraged. Yes there is lots do to realise even the first stages of much that was discussed but everything felt so positive. I find it very frustrating that I am unable to bring my passion to my paid work. And I think that is perhaps more acute because I work with art. When I have worked in other industries (to support myself) I have not expected to be passionate about what I do – though I have often ended up being so, I became a bit of an espresso nerd when working in both a local cafe and a bakery! I think the problem is that the local council is not driven by passion.

With all those meetings I did not have time to do more than open the box of reject and faulty ties that Sarah kindly left outside of my studio. Sarah is a professional photographer who also recently moved to the studios. One of her commercial clients is Sweden largest tie manufacturer/importer. Sarah (via email) introduced me to the company director who was more than happy to give me a box of ties that for one reason or another do not meet their exacting standards. It will be good fun to play with these new ties. I do not know what I want to do with them yet but I know that I do something different with them – no heraldic references, no roses …

Pavel came passed the studio last week – my first visitor! We had a really good chat about various things that concern us both: our artistic identities, how to develop our careers, our commitment and/or interest in being in an artists’ group. I had not expected to get feedback on the chains of cuff and collars that were hanging on the wall, however Pavel really liked them and saw them not only as finished pieces but being very attractive as public art pieces. His interest and appreciation of them is timely as there is about to be another chance to submit work for public collections. This time six counties in ’middle Sweden’ are buying work from each other’s artists. I had not thought about including either of these pieces but now I think that it might be a good idea. If nothing else it will make me get the work to a point where I can photograph it! I really do want to spend more time at the studio and I am looking forward to doing so during my time off from my job. 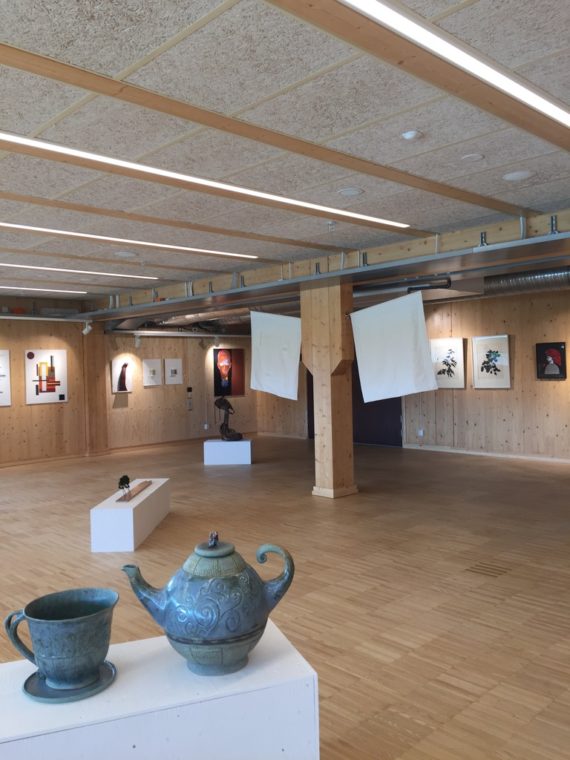 I saved 20 kronor (about two pounds) and an inevitable sense of disappointment by not dashing out to buy a copy of Uppsala Times last Saturday. The article about the group show appeared only in the online version of the paper. As I do not subscribe I have not seen the article however I will ask one of the show’s curators for their press-release which they said was basically reproduced as the article!

The show has lead me to reflect on my understanding of curating. Over the past week various thoughts have risen to the surface … I am aware that some other as yet unformed things remain in the depths – where they may well stay, or they may acquire the shape and energy to make their way towards the light. Speaking with a couple of artist friends helped.

One of the things that interests me about working with curators is the intellectual framework(s) that they bring – particularly to group shows. Through their selection of both artists and artworks they are able to enrich what might otherwise be a rather flat experience. The best curators draw out what is always already there and make it really sing. The skill set for doing this is vast, and is something that is acquired through concerted effort.

My expectations of a curator are considerably different to those of an organiser. And this is where I am struggling with the Adelante show. The show has certainly been organised but I find it difficult to say that the show has been curated. On the show poster is says ’curated by …’ and this unsettles me. I think that it does everyone, not least the artists claiming to have done the curating, a disservice. ’Organised by … ’ or possibly ’produced by …’ would sit a lot more comfortably with me. I have nothing against being in a well organised show.

What I find difficult and uncomfortable is being involved in things (artistic or other wise) that are one thing while claiming to be another. There is nothing that I can do to change the current situation, my question to myself is about what I do in the future. Maybe I do not need to actually do anything until the future arrives. Maybe it is enough to be aware of how I feel and learn from it. Learn to be more critical and more questioning from the outset. Learn to trust my judgements. Maybe it is better to commit to that than to try to make decisions about as yet unknown situations.

There was mention of a group meeting over the summer. It will be interesting to see what is on the agenda. I need to have the courage of my convictions and raise the question of working with external curators. It will be interesting to have a proper discussion about that, and it will allow me to tackle some of my frustrations with the current show in an indirect way – which is more appropriate than making direct criticism. 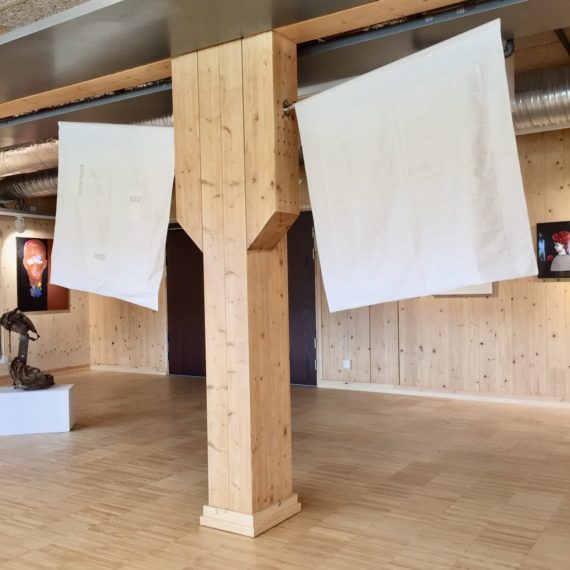 The untitled Adelante groups show (very discretely) opens today. No fanfare, no vernissage but an article in the county newspaper – I have to wait until Monday to read that at work … or should I buy a copy today?

It is certainly the most diverse show that I have been in. It reminds me of exhibitions that I used to see at the library in the town where I did my foundation course. Even then I found those shows lacking something … or not really connecting with me.

Perhaps I am looking at things from the wrong perspective. Perhaps it is the very lack of cohesion that screams something that I do not want to admit – that I belong to a group of artists desperate to show and willing to take any opportunity to do so. A lack of critical judgement?

The number of mentees now seriously out weighs the number of mentors – not that we have those roles anymore. So to put it another way the number of non-Swedish born artists is far higher than the number of native Swedish artists. This significantly shifts things. When the group was part of the national Art of Participation project every non-Swede was partnered up with a Swede. To me this made sense when we exhibited together as there was a dialogue. I felt that both sides benefitted from the acknowledged crude but equal ratio of Swedes to non-Swedes. I do not get the same feeling from this show. What I get is a cacophony of disparate voices rather than conversations between international peers. Perhaps we just had better luck with our first show back in 2018. The work simply worked better together. The space was more conducive – three distinct rooms rather one large open space where inevitably a group show of sixteen artists presents something of a visual jumble (sale).

The space itself is not easy. It is a kind of mezzanine overlooking the café and facing the glazed facade of the building. The floor and walls are neutrally treated pine which lends a definite character (sauna-esque?) to the venue. The ceiling is not particularly low yet manages to feel as if it is. After installing my work I tried to take a couple of pictures for Instagram. I gave up after several attempts. The room, or our show, has committed the modern sin of not being Instagram friendly! I think that it would take a very skilled artist/curator to make a solo show work in the space. So perhaps I should not be so hard on our group attempt.

Full disclosure: all the artists are getting a fee for exhibiting. While this was not my sole reason for participating it certainly made the offer more attractive. It feels good to acknowledge this. The extra income is very welcome now that I have two studios to support. This was the first time that I calculated what my fee would be as part of my decision making process. Until now I have made judgements about participation based on less overtly economic factors. As far as I can recall I have always chosen to be in group shows because the show itself sounded interesting.

Writing this it dawns on me that I have never before been a member of an artists group that shows together. And now that I have had that realisation I wonder if I want to be part of a group that shows together. My initial interest in the Art of Participation was the opportunities for meeting other artists and making connections. It was never about putting on group exhibitions And the first thing that was mentioned when Adelante was formed was a project with an artists’ initiative in northern Sweden – that is what I have been holding on for – projects rather than shows. This distinction should make it easier for me to decide my level of involvement in the group’s activities.

I am happy if a project results in an exhibition. I am not however looking for a group of artists to exhibit with. I am pleased to have reached that conclusion, not least because it puts all my fears, apprehensions, concerns, and anxieties about the show in to context.

That all said I wonder if we will get any feedback about the show.