Today I replied to an email asking if I'd like to be involved in a schools project later this year. It's a project that I did a couple of years ago for an art centre in north London. It felt good to reply positively while also highlighting how I want to work.

The email, like others I've received, gave a certain amount of information about what the organisation wanted from me but it wasn't very discursive, and it certainly doesn't feel as though I'd be entering a 'partnership' with the gallery and the school. This is something that I'm very aware of now (since Eastbourne). It would be interesting to ask the gallery and school if they consider the artist to be project partner or a hired specialist. The email detailed the number of schools involved, the number of hours at each school, the age range of pupils, the artist's fee and the materials budget. Am I being unrealistic to expect a gallery to decide these things in discussion with the artist and the school?

In my reply I expressed my interest in the project, I explained that I have a set day rate and that I don't work for less than a day. I divided the artist's fee by my day rate and told the how many days I could offer.

It took me a long time to write what amounted to about six lines and another while to decide if I should hit the reply button or not. I hit it with some trepidation.

Although it's an entirely different situation the experience resonated with my feelings on reading the letter from a group of sculptors in April's a-n magazine. That is that artists are often the poor relations even in dealing with the organisations and institutions that should be supporting them. How have we gotten in to this situation?

It feels likes there's so much to do, too much to do and I can't seem to make sense of it all. This is unlike me – usually I'm pretty well organised. Perhaps I should set myself an arbitrary starting point and … start.

For the last few years I've 'maintained' my practice however my concentration has been very much focussed elsewhere. To be honest I think I'm daunted by the new 'freedom' I have. When I couldn't really do anything it was easy to fantasize about everything I'd do when I was able to. Now that that time has come I've about three years worth of ideas, schemes and plans to sort out. I'm feeling rather out of touch with the art world.

I'm in danger of acting like that tired child who refuses to go to bed. If only I could admit I'm exhausted and allow myself a bit of time out then perhaps I could start to make good sense of things …

In no particular order;

• get some good documentation of recent (and not so recent) work

• finish some/one of the things that's lying around the studio

• go to openings and galleries

• REALLY look at up coming opportunities

• get a website/online presence

• go back to college

• get some good advice

• move to the coast

The last two Sunday's I've been invigiliating Forensic (a group show at 55 Leroy Street, London SE1). Yesterday the visitors were a bit more hesitant about my work. The piece invites people to 'spy' on the rooms above and below the first floor exhibition. This done by peering into spy holes located in the ceiling and the floor. The spy holes (like the ones usually found in domestic front doors) are quite discrete – what's most obvious is the ladder that enables access to the one in the ceiling.

I have a real sense of detachment from the piece. And don't know how I feel about it. Although it sits well with the other work, and Linda Duffy (the show's artist/curator) likes it, I'm a little too aware of it's short comings. I've had good feedback from artists who know my work. They saw aesthetic and conceptual connections with my previous work, and while I appreciate this the piece is a little too blunt for my liking.

It's probably not insignificant that I was working on ideas for this show shortly before John died. It was installed in the days after returning from burying his ashes in Sweden. Perhaps my sense of 'lack' doesn't really belong to the work at all.

If anything I'm disappointed that there's so little of me in it. It was a site-specific project and although it embraces this it has less wit, intelligence and ambiguity than I would like. 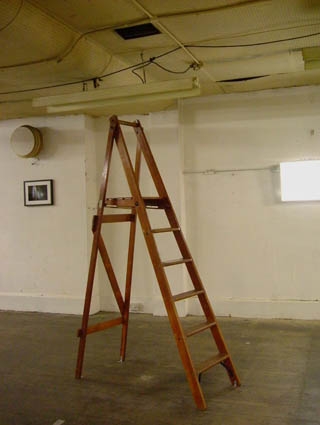 I feel inspired to get involved in education projects again. Last week I attended the enquire/envision seminar in Eastbourne. The discussions and presentations interested me, particularly the emphasis placed on contemporary art projects and the creative input of artists. It made me realise just how burnt out I got doing back to back workshops that moved further and further from my own practice. Things I need to remember:

There were a few other artists there, most people were gallery educators, and it was good to have the opportunity to speak with them. Susan Diab’s presentation made some very relevant points about what an artist brings to a project and the need to be recognised for our breadth of skills and experience.
What we realised was that the artist (working on education projects) is often the only partner that isn’t part of an institution and while this level of autonomy is something we value highly it brings it’s own distinct challenges. Susan and I discussed setting up an artist’s network where we (artists) could keep in touch with other. This discussion led us to consider the possibility (and desirability) of an Artist’s Union.
It’s far too easy for artists to feel that they have no authority or support when dealing with organisations and institutions. A number of us shared stories of unsuccessfully trying to negotiate a-n’s suggested rates of pay with established galleries that real should be adopting them. Too often we concede, hoping that eventually we’ll be rewarded.

All the talk about CPD (continued professional development) was interesting but what constitutes an artist’s CPD? I found the idea of an accredited CPD course rather alarming, what is it with everything having to be accredited? To me it’s a response to ‘tick-box’ culture, rather than actually judging whether someone is capable of delivering a good project. I’d like to think that the projects themselves are a measure of my success, not whether I’ve attend sufficient modules and workshops. But then I remember a time when NVQ’s were given in recognition of achievement made in the work place, and not a short course at a local college.

The seminar was hosted by the (currently under construction) Towner Gallery. It was a privilege to get a tour of what will be an amazing new building. In the last few years the south coast has had some major developments and re-developments in terms of contemporary arts venues and the new Towner looks like being a great addition to the De La Warr and Aspex, and the emerging artistic communities in Hastings and Folkestone.
I realised that it would take me a comparable time to get to Eastbourne as it would to North London. Now that I’ve met some of the gallery educators and seen more of the area I know where I’d rather be working.