I've been trying to find a venue for a sculpture show in Crystal Palace. It's proving to be very frustrating….
The show is scheduled to be part of Signals 5 – CP Artists annual arts event – and I really need to have a venue confirmed in the next couple of weeks in time for the publicity.

I've been trying to identify the problem(s), so far I've come up with:

I knew this wasn't going to be easy but I'm surprised at how many absolutely dead ends I'm coming up against.

If I can't get some kind of positive response by mid June I'll have to admit defeat for this year and start planning something grander (and more fundable) for 2008!

I owe David Barrett a great deal. Since we met on Stuart Brisley's Fine Art Media MA at the Slade in 1995 David has continued to take a proactive interest in me and my practice -even when I was doubtful!

Now, as the result of his nomination, I'm going to Venice with Pilot 3 (www.pilotlondon.org)

It will be my first time at the Biennale, and despite having gone through old copies of Frieze and Art Monthly I don't think anything will prepare me for the sheer scale of the opening weekend.

David maintains his practice alongside lecturing and criticism. He's also one half of Royal Jelly Factory – Lucy Head is the other. Together they publish artist's monographs and websites. Their enthusiasm and commitment is truely inspiring and I am very fortunate to know them.

Project Me is somehow enabling me to recognise, value and actually enjoy relationships that previously I just 'didn't get'. Re-engaging with my practice, spending time in the studio and with artists is making me better! And being better – a better artist, a better friend, a better me – can only be a good thing. The more I have the more I have to offer ….

It's four weeks since I worked my last shift in the cafe and already it's had a huge impact on my work … not only that but i feel like an artist again – rather than someone who, on a good week, manages to get to studio for a few hours. The strange thing is I've probably not been to the studio much more than before – but now I have time for all the other essential stuff, seeing shows, meeting artists, developing projects as well as being more relaxed about making work ….

What I've really enjoyed is having time with other artists and time for reflection. The studio feels more playful – last week I caught myself sitting back and smiling at something I'd made with bright ribbons, materials I'd have been far too stressed to allow myself a couple of months ago! 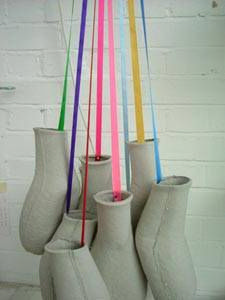