By the skinny skin of my teeth I managed to meet Pilot London’s deadline for responses to three questions;
1 How much do you think that the art world is shaped by demand?
2 Where do you feel you are in the food chain?
3 How do you keep control of your input into this system critically and/or creatively?

The team at Pilot sent these questions weeks ago and I’d put notes in my diary to remind me a couple of weeks before the deadline. Even so I left it very late. I actually got a lot from thinking about how to tackle the questions and how to respond. My answers might be brief but they’re an accurate summary of where I am right now, and interestingly they also hint at future directions.*

Question three is particularly relevant at the moment. I’ve been wrestling with how to deal with that group show that I committed to two years ago and that is now (to my mind) something quite different. Last night I emailed the curator and proposed an alternative to the piece she’s expecting. I know that part of my motivation is an attempt to regain some control. However there are also some very real practical issues around the installation of the originally proposed piece that make it less than ideal (there is only one day to install the show and I have a work commitment which I can’t afford to cancel, so I’m very limited in terms of the time I can spend installing).

The whole process has made me think about the people and organizations I work with – the experiences I’ve found enjoyable, the ones I’ve found more challenging, and the ones that shift and slide between. The really enjoyable one’s tend to be where;
• the project has an strong conceptual integrity,
• collaborators and partners have clear roles and responsibilities,
• communication is easy and open, and
• flexibility is kept in balance.

I love what I do, is it expecting too much to enjoy it too? …

* All the answers Pilot receive will be published (‘exactly as they are’) later this year, and it feels wrong to write mine here!

Feeling excited and nervous about the Norway show. Got a few more things to sort out before I’m away for a couple of weeks, once I’m back I’ve got three weeks before I head out to Brusand’s Nordisk Kunst Plattform. It’s a gallery and project space run by artists Liz Croft and Jan Kjetil Bjørheim, the gallery is the former ticket office and waiting rooms of a decommissioned train station on the Stavanger / Egersund line.

It’s the first solo show I’ve had in years, and my first overseas show ever. It feels like a real landmark (career mark?). When it’s installed I think the work will look great. The main piece features model train sets – it’s happy mix of ‘site relevant’ and studio practice development.

Last week I had a wonderful time in a proper model shop getting all the bits I needed. Being in that shop took me back to my childhood and the local model train shop I used to go to with my father and brother. I was amazed how little models trains have changed – I was never that into the trains, I loved the model houses – the flat-pack printed card ones, that I’m delighted to say haven’t changed at all. Wayne (one of the two brothers who own the shop) was really knowledgeable, helpful and interested in what I was doing. The place smelt of that very particular thin oil that I remember from my brother’s periods of obsessive train maintenance. I’m very excited about going to studio tomorrow and trying it all out!

I’ve also got to work out what I’m going to do about a large (very large) group show that’s in London the week before I go to Norway. I really don’t know what to do – the show has changed so much in the two years that it’s taken to organise. Originally it was a far smaller group of artists with the intention of showing in an vacant shop. We met up a few times and discussed our work and our ideas – it felt very open and interesting, and though we are all quite different I was confident that the show would be cohesive. As it stands now it’s a big show in a small gallery, I don’t know all the other artists though I know some are more design/fashion focussed. Now that I’ve seen the gallery I think the piece of work I made for the original show would look far better in Norway. I haven’t been in a situation like this before and it’s raising all sorts of issues for me – about commitment, professionalism, friendship, ego …. 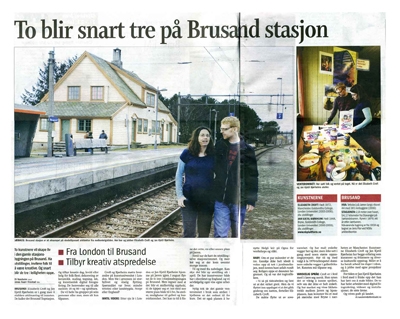 Finished patchwork punch bag last week. Thankfully I like it again! I went through I period of wondering what I done and why I'd spent so long working on something that didn't please me. Now that I can stand back and see it I like it. (Photographs to follow as my camera was playing up last week.)

It was interesting to sit back and just be with this finished thing – this thing that I started working on about two years ago. I don't think I've ever taken so long to complete a piece. It's been with me over a very tough time, and that's important. It's changed how I see it; I used to think it was a metaphor for what was happening to me, now it seems to speak of two beings (two shirts / two men). Two beings suspended in a vulnerable position …

I know what I'm going to call it now – I just need to do the maths!

Brilliant! – I’ve just had the dates confirmed for a show in Norway. So long as I can get everything together before I go on holiday I’ll still have time for a dry run in the studio before I make the installation on site.

This year has been incredible. I looked back over my diary this morning and was amazed at how much I’ve achieved in the last six months. No wonder it feels like so much longer than it’s actually been. This time last year I’d not long been to the Venice Biennale, and that feels like an age ago.

All the things I’ve done seem to have happened ‘naturally’. One thing has almost seamlessly led to the next. It hasn’t felt like that before.

I’m a bit concerned about the number of surveys and valuations that are being carried out on the studio building. We’ve had a very good deal for the past few years and I accept that the Landlord wants to sort things out, however it looks like it might be a bit more serious. The building is one of two former furniture depositories – the other building was converted into flat last year, but planning permission was turned down for our building due to it’s proximity to the houses behind it. I wonder if the Landlord isn’t interested in non-residential properties. Our building is in a pretty poor state and although we’d appreciate some fundamental repairs and remedial work we don’t want it redeveloped.
I really like being there – there’s a great atmosphere and everyone gets on well.