Lots happening. I will set myself the task of making weekly entries again now that things have calmed down.

I'm really pleased the piece I made for Michael Petry's Golden Rain installation. I'd like to see his work when it's installed in the lighthouse.

Forensic – the group show that I was in/wasn't in/am in again – looks like it's going to be really interesting. Seven artists were invited to make work in response to the building, it's history and it's redevelopment. I like this way of working though after talking with Michael I realise how 'thin' my research was for this particular project. In my defence I was having a very stressful time with John's health and death. The piece in itself is fine, it's just that it sits apart from other pieces I've made recently.

Tine and I spoke with our studio landlord last week and it looks like we'll be able to keep the studios going for a while longer. There is a potential rise in costs now that they've finally sorted out properly registering the whole building with the council – we might be hit with business rates. I know this was a big problem a few years ago for some studios in the east end. The good thing is that we now have a proper postal address. 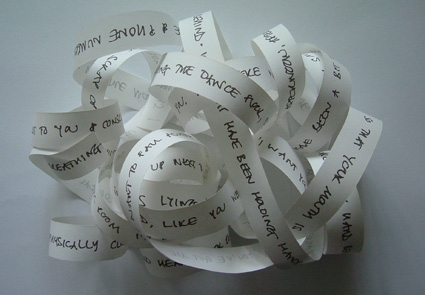 I'm really flattered that Michael Petry has asked me to be one of the artists contributing to a forth coming project of his. The proposal sounds quite beautiful – an installation in a lighthouse on the Norwegian coast.

We've been asked to produce something that will be sealed into an oversize golden glass raindrop – something like a message in a bottle. On my way to studio on Friday I worked out what I want to make. It's very personal and feels completely appropriate. I haven't been able to stop thinking about it and today (my first Sunday in the studio) I've been thinking about how to do. I must trust my instincts and try out the materials/processes (rather than think them through).

I'm dog sitting for a friend and thought it's about time I googled myself – just to see what I've been up to.

I found this text work called i_you. It's a performance text – each word is read prefaced with 'I' and followed by 'you'. It was part of my MA show. I made the piece in 1997. Reading/performing it tonight it seems to say so much about my relationship with John 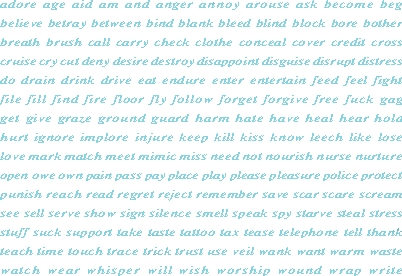 Had a good day at the studio – sorted out a few things, threw out some useless bits I'd been hanging on to for years (when did I think a bag of plaster splattered dried out clay was ever going to be useful?).

I want to concentrate on installations and objects this year. The studio isn't really very suitable for the installations I have in mind – they're very 'clean' and the studio isn't! Kim and I discussed this and the subject of drawing kept coming up. In recent years I've kept notebooks rather than sketch books, and the studio has a desk but no wall surface I could draw against. It feels as though the drawings should be BIG – the kind that demand big movements, the kind I'll stand back from, the kind that leave me smudged with charcoal, chalk and pastel.

My installation at Leroy Street needs re-thinking. I wanted to install spy-holes in the floor boards and ceiling. (Those spy-holes that people put in their doors to see what's the other side.) However the floor and ceiling is reinforced concrete – with a thickness of about 25cm. I thought I'd have to carve away a bit of plaster to get to floor boards from underneath, possibly remove some insulation – but major demolition wasn't in my mind.

I really feel for Sarah – who's been trying to secure a vacant shop for an off-site project. Perhaps it's just a London thing but it's virtually impossible to use these 'alternative' spaces. Even if you find a supportive landlord the issues of public liability and council licences can halt a project. I had the same problems last year when I tried to use vacant commercial properties in Crystal Palace. While everyone from the artists through to local council wants to see creative use of empty high street units the shere amount of discussion, administration and financial support required for a three week show make it an unappealing venture for the aspiring artist/curator. Sarah is now looking at putting the show in a gallery …. 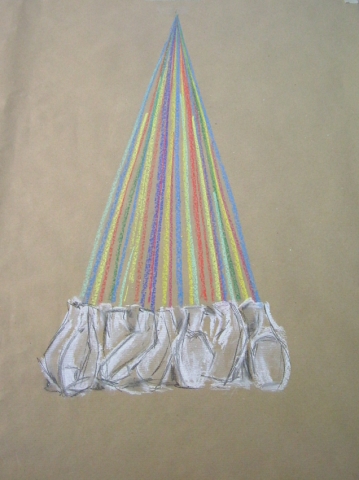