I’ve really enjoyed being part of the studio. We all get on well and are very supportive of each other. I realise that in one way (financially) we have been very lucky to have such a lax Landlord, I haven’t had a ‘rent’ rise in the six years I’ve been there. However that is my good fortune and the result of the Landlord not really managing our licenses. I am a professional and responsible person and if there had been reasonable annual increases managed through new licenses I would have paid them. However it feels as though the situation is becoming increasingly fraught as the Landlord realises that he and his office have allowed considerable debts to accrue – not least an entire year of rates.

It is inevitable that my monthly fee will have to increase to cover the future costs of the Non-domestic Rates. My feeling is that the increase will make the studio more expensive than one of a comparable size with a studio provider such as ASC. If the Landlord tries to recoup previous costs the increase will be massive.

For the time being I will wait and see what happens. The worse case scenario (which isn’t that bad) is that I am served with one month’s notice on my current license and offered a new one that I’m not prepared to accept. So I might have to come back from Stockholm for a few days to put things in storage.

Other artists have suggested routes “we” could explore: getting charitable status, and asking for a long-term lease.

• I am not interested in applying for charitable status. I’m aware that the criteria for this have become a lot tighter over the last few years and as I’m not interested in doing anything at the studio that could legitimately qualify for charitable work (i.e. education work) so I think it’s best if I make the positive decision not to get involved.
• I’m also not interested in taking on a long-term lease (or being part of a ‘group’ that does). This is too big a commitment at the moment. And I do not trust the Landlord sufficiently to enter a more complex arrangement than the one I already have.

I have to wonder at how acute the Landlord’s business sense is. I am still on the license that he acquired from the previous freeholder when they sold the property over fours ago. At the time the monthly fee was sufficient to cover maintenance and other costs the Landlord incurred. Obviously it is not now.

Clifford Chance opening was very good. Very well attended by a good mix of city and arty people.
The speeches, one by someone from Clifford Chance (whose name I missed) and Michael Petry’s, really brought home how significant such a show is. For Clifford Chance it is a very visible and public demonstration of their commitment to their LGBT staff and clients. And for Michael it is an opportunity to show “museum quality” art and artists who are out and proud, and who do not conform to many (or any) of the stereotypes of ‘gay art’.

I have to applaud Clifford Chance for putting on such a show, not least because their clients and peers as well as their own staff will see the exhibition. The exhibition is throughout the corporate entertaining and meeting floor.

I’m incredibly flattered that Michael invited me to show; I really appreciate the support, interest and friendship he has given me in the three years since I met him when I bumoed in to him at his London Gallery. It’s a great boost to my confidence, as were all the positive reactions I got on Wednesday.

It’s all good preparation for my Swedish ‘sabbatical’. 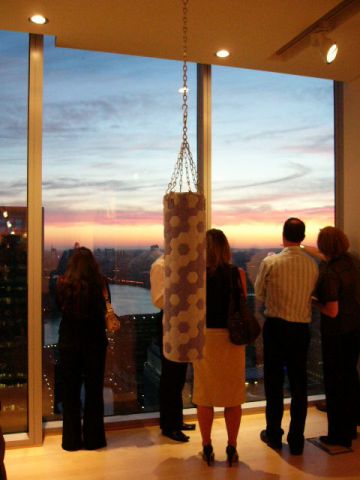 I keep thinking about the Slade MA show. I went on Monday afternoon. It must be about ten years since I was in that building and it’s 12 since I had my MA show there.

A lot of work has taken place on the physical building in those ten years. Nearly every one of the older studios has been sliced in half – horizontally – to create a plague of mezzanines and half floors. A new studio has been built under the UCL quadrangle.

The show was laid out with a significant number of artists showing in several rooms on different floors.

Information about the artists included their exhibitions, work experience and often the price of pieces. Few artists had statements.

I left feeling that I just didn’t ‘get it’.

I guess that I should have asked one of the students about the curation and what it was like to study there now, unfortunately I didn’t leave myself enough time and now I’m left feeling unsatisfied.

I won’t leave it another ten years, perhaps next year’s show will answer some of my questions.

The installation at Clifford Chance went well yesterday. The work was (of course) exactly as it was when it left the studio.

It was great to be able to take time placing the pieces.
I’m really pleased with how they look.
(Need to work out how to take a good picture against that window.)

I think today marks definite progress – call me shallow but there was something very nice about having professional art handlers collect my work this afternoon.

It was my first time. In the past I’ve driven, posted, carried and lugged work to shows. Today it was all very different – a quick phone call this morning, then this afternoon and right on time a man came to the studio and took the two pieces I’ll be installing on Saturday. If the work were simpler to install I wouldn’t have to see it again until the opening. And that, for me, is a really strange thought. It feels good, it feels professional.

For the future I need to think about packing/packaging (– what do you call it?). I’m so used to moving my own work around that I’ve never bothered with crates or boxes. It’s usually the lighter the better, so no wooden crates. However seeing my somewhat delicate work wrapped in some polythene and brown paper made me think …
a) is that sufficient protection?
b) where will the work be held until Saturday?
c) who else will be handing it?
d) is that appropriate packing?

There’s also something about the theatre, the play, of being an artist that I miss out on when I cut corners and don’t really think things through. The logistics are part of the work. Perhaps some of what I used to dismiss as pretentious is in fact one stage of a whole experience. The packaging is important – yes a Tiffany ring is still a Tiffany ring if it’s in a plastic bag or a Tiffany box, but to be honest I’d want it in the box! So I want my work to arrive in the equivalent of the Tiffany box – an appropriate, sturdy, well made crate that starts the process of excitement and engagement (no pun intended!). When my work arrives somewhere ahead of me I want it to make a good impression. My commitment to my work should be apparent. I WANT my commitment to work to be apparent.