I am very excited that Klas and I will be showing at the wonderful Målhammar next year! We spoke with Ann, who runs the gallery, at Klas’ opening last night and this morning I sent her an email confirming our interest and suggesting we show in June. 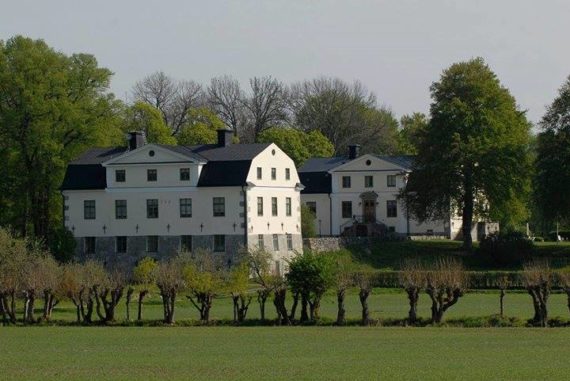 This is just the kind of incentive that I need to get a raft of ideas of the page and into the studio. Målhammar is a country estate dating back to 1390, in 1640 a large mansion was built there, this no longer exists however what remains are two very elegant buildings that face each other across a gravel courtyard. On the ground floor of one is a suite of rooms where Ann hosts exhibitions from Easter through to autumn.

The architecture and scale of the rooms demands work that is confident and resolved. It feels like the right challenge at the right time. I think that Klas and I make an interesting pair – both working in sculpture we have very different languages but speak about similar things. I am looking forward to planning the show with him. It will be my first two-person show and I am sure that working with Klas and Ann will be a very rewarding experience.

So while I have been talking with the current leaseholder about taking over the remaining years on their contract, the property owner has been in negotiations with another organisation about an entirely new contract.

The potentially brilliant studio is looking somewhat less potential and brilliant right now. The revelation came about during a very productive meeting with Klas, Tina (another artist) and Hamad – the manager of the adult education centre. Hamad had heard that maybe the premises where going to be taken over by the local branch of the national pensioners’ organisation while their usual offices where being renovated. A few phone calls later we had the information confirmed.

Our meeting was good in that it identified mutual interests in establishing a creative space for professional artists, classes and short courses, as well as a workshop/studio that could be hired on a project basis. PRO – the pensioners’ organisation – is only hiring the first floor, leaving the ground floor workshop vacant. The owner intends to put up a partition wall at the top of the stairs effectively dividing the space in two. We are waiting to hear if he is interested in hiring out the ground floor.

Hiring just the ground floor is not ideal but it could be a good first step as PRO will only stay as long as their usual premises are being renovated (they estimate a year for that work). Re-thinking how we could use the available space – it could accommodate four or five artists in an open studio – could make it viable and attractive. In the meantime I continue to keep my eyes open for other locations.

The Royal Armoury in Stockholm houses a modest but fascinating collection of ceremonial armour, weapons, and heraldic objects, as well as the royal coaches and a selection of historical clothes from the palace. I spent a few hours there last Wednesday sketching and taking photos for new work. The skill and labour evident in so many of the pieces is stunning. It is something to appreciate rather than to emulate (or attempt to emulate). I was, and am, more interested in the forms of the objects. I do not know how this will manifest itself – it may not do so in obvious ways – however it feels good and appropriate to be looking at these pieces. The coaches reminded me of my ‘unfinished’ work for my degree (I completed the degree but what should have been a sculpture was presented as un-packed components – a work in progress). Funny to think that after all these years I am again drawn to things baroque and opulent.