It is been on my mind to re-engage with my blog for the last few weeks (months?) however I have simply been too busy, or too in need of time doing something relaxing (sitting in front of a computer, even a nice one, is not my idea of a relaxing time) that I simply have not gotten around to it.

The is something (or more specifically two things) that I realise are causing me an uncomfortable level of anxiety, my hope is that expressing that here might enable me a little respite -though the resolution of the situation(s) is far from my authority.

In mid-December I was finally invited to submitted my passport and a stack of supporting documents to the Swedish Immigration Office so that they can assess my application for Swedish citizenship. The documents cover the last five years (I have lived here over seven now), they include all my employment contracts, the certificate showing when I registered as freelance/self-employed, my annual income/tax declarations for my freelance work, all the periods of study, any/all other sources of income including money transferred from or earned overseas, and in addition details of all travel outside of Sweden. This amounted to a hefty pile as I have had several short-term employment contracts – some for as little as a day (certain education institutions issue contracts rather than accepting invoices from us self-employed even if it is just for a one lecture) – and I have taken several short courses. The Immigration service now investigate my application with the primary aim of making sure that I can support myself. They can easily run a credit-check and see that I am not in debt. My concern is that they have a ’template’ or formula by which they judge whether or not someone can, and will continue to be able to, support themself. I have a consistently low income as do many artists and am well used to living simply and sometimes beyond the cash/visible economy – swapping skills and labour with friends and their networks. The problem with this way of living is that it is not documented. For the two and a half years that I lived with a friend of a friend I took care of her children in lieu of rent – a good deal for both of us but not for demonstrating a sustainable livelihood. Although (Swedish) friends and colleagues say that I should not worry and that as I have been here so long that there should not be any problem. I am however all too aware that an established family living on the same estate as me were denied right to remain despite both parents having jobs, them owning their flat, and having committed no crime nor drawn on unemployment or other benefits. The reason they were turned down was that a previous employer had underpaid the equivalent of national insurance contributions for a few months (a mistake which the employer admits to), this error however meant that during the assessment of their application they were deemed to have failed to fulfill the employment criteria. The family were forced to return ’home’ to a country that they no longer know or have any connection with*. The Immigration Office agreed that their regulations are unfair (punishing an employee for an employers mistake) at the same time as saying that they are not able to change them – only politicians can do that and that process has not begun. So I do not feel that I can take my application being approved for granted.

This alone would concern me. I want to be a full citizen in the country where I live. However in the light of the Britain leaving the European Union in a number of weeks the issue takes on a far greater significance. In the best case scenario I receive my citizenship papers on Monday allowing me to remain in Sweden no matter the outcome of how Britain leaves the European Union. The worst case scenario is that I am denied citizenship and the UK crashes out of the EU, this would necessitate me moving back to Britain where I would have to start over again. Between these best and worst scenarios are a plethora of variations, a myriad of complications and frustrations none of which I can steer. As nothing is certain my future is a tangle of ’ifs’ and ’buts’. If the time it takes to assess my citizenship application goes beyond March 29 and the UK either crashes out or even leaves on the current withdrawal proposal I could be in trouble. This is because current negotiations have secured some rights for employees but not for freelancers (this was recently reported in the Guardian). I am registered with all the Swedish authorities as a freelancer (freelancers in Sweden have the right to also accept contracted employment – PAYE work) as I suddenly non-EU freelancer I might not be able to stay here. I do not know how much time I might be given to pack up and leave. Should I follow France’s lead and prepare for a no-deal situation? That would be easy if I had my citizenship – I swap my Uk driving license for a Swedish one, make sure that I do not have outstanding British invoices, and brace myself for more expensive trips to see family and friends. Without it I truly do not know what to do … as I said in the worst case scenario I could be looking at having to give up my life here in ten weeks – sell my flat, leave the studio, cancel the shows at Glitter Ball, pull out of the exhibitions booked here for the summer and autumn … say good-bye to my friends … 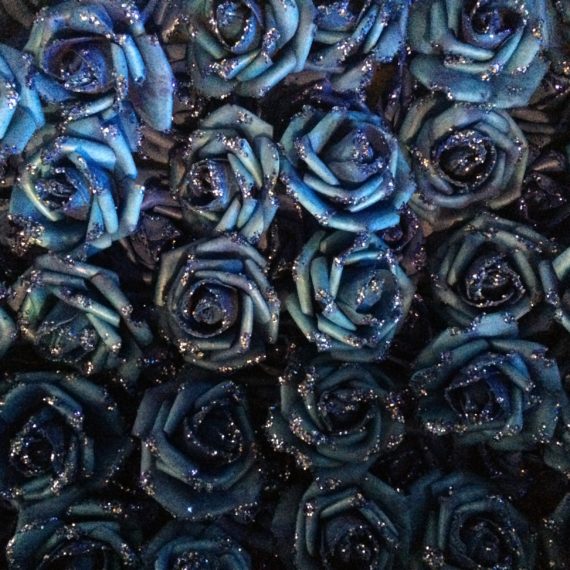 Perhaps aware of the necessity to be distracted I have totally over committed myself to projects this January and February. On Thursday I spent a very happy day at the studio glittering over one hundred fake roses (and there are at least one hundred more still to be glittered) for an upcoming installation. I was not especially thinking about English roses when I choose them for the work, I choose them because I wanted to evoke cultivated species of formal and historic pleasure gardens. I am very excited about this work, it is a public piece that I was invited to make by Uppsala county. They approached me about the commission – I had been selected from a short-list that I did not know that I was on. It felt as though I had suddenly and unexpectedly reached another level as an artist. I hope that it does not become my Swedish swansong.

* The family were non-European and require a right to remain as well as citizenship.