Had a couple of great days in the studio last week. I spent about 13 hours there on Thursday – I haven’t spent so long in a studio since I was on my MA. I didn’t plan to be there that long it just happened. The studios are quite busy at the moment and I enjoy knowing other people are around.
I’m trying to focus on resolving/finishing pieces that I’ve started over the last year or so. Though this, of course, leads to new thoughts and ideas. There’s no point in having all these ideas and no finished work. There are things I want to achieve that depend on having something to show other people – at the most basic level I’d like feedback on my work, beyond that I want to be in position to apply for shows, residencies and competitions.

I’ve decided to invest in myself. This is a new notion for me and I’m working it out in practice. For whatever reasons I’ve often felt a bit awkward about demonstrably believing that what I do has a place in the world – what I mean is that I believe in what I do, but I don’t always believe that anyone else is, or would be, interested. When I think back I realise that this is nonsense and that people have usually taken an interest in what I do and say. So I’m actively countering my reticent tendencies and getting on with it!
This weekend I’m going to Norway for the opening of Michael Petry’s Golden Rain project. Deciding to go to the opening has taken me through some interesting thought processes. Initially I was really excited, then I started to wonder if I was being a bit pretentious – after all I’m only one of 100 artists involved in his project, then Michael emailed us all saying that the organisers were really keen that as many artists as possible should attend. So I booked my flight … I guess my current anxiety is actually to do with taking myself seriously and feeling comfortable in the world that’s been a fantasy for so long.

Other investments include asking Hugh, who has the carpentry shop on the ground floor of the studio, to get some plasterboard for me. At the moment the studio doesn’t have a single wall with a good surface. There’s also not a single surface that I can pin things to – and I’m working on finishing embroidery pieces that are pinned directly to the wall. Those three sheets of plasterboard are going to make a big difference!

These modest acts of investment are important to me. It occurred to me that I need to take myself seriously if I want other people to do the same. There’s a need (and a desire) to make this attitude real – to give it material form.

The studio was broken in to a second time (while I was away). They took my radio and went through everything. Jodi had sorted out things but when I went on Wednesday I noticed that there were things resting on the plastic sheeting I'd put up to keep the heat in. On further inspection, ie. going up to the area above the staircase and kitchen, the burglar had emptied all the boxes I had stored up there. While putting things back I came across journals and sketch books from my degree (1987-90), from when I was in Australia (1993) and from a couple of performance projects (1995-7). It was amazing how many of the things that concerned me then still concern me now.

Reading those journals, realising that 15 years on I was still skirting round the same issues, was simultaneously re-assuring and alarming.

I'm going to look into a short course of web-design. The more I thought about the website I want the more I realised that a website is an ideal media for showcasing my work. The website would be a project in itself. Mapping out the content reminded me of the contextual projects I produced for eyestorm … 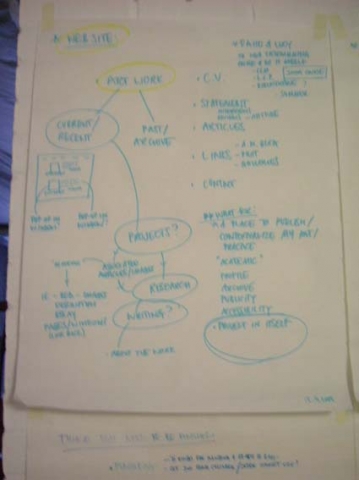 This time last week I was on day five of a six-day trip to Berlin. About now I was making my way from Zimmer Straße to Linden Straße before heading back to August Straße and on to Rosa Luxembourg Straße. It was my first time in Berlin – what an amazing interesting place.
It was my second Biennale experience (the first being Venice last year) and it could hardly have been more different. I wasn’t expecting a repeat of Venice in fact I don’t know what I was expecting. What I found was a vibrant young art scene in which the biennale seemed just one aspect.

The first few days of my time in Berlin were spent with Francois (an art-lover I met in Venice and have met with a few times at shows and fairs in London). It was great to have him meet me at the airport and whisk me off to the biennale as soon as I’d dropped my bag off at the hotel – though I have to say I’ll never attempt to ‘do’ the biennale in eight hours again. He was quite pleased that we’d seen it all (save for a video in the KunstWerk basement), I felt that I hadn’t had sufficient time in each location let alone with individual artworks. It was an interesting insight into how he sees art. Francois has a job that involves a lot of international client liaison and he’s able to schedule meetings on Fridays and Mondays which gives him the weekend to visit shows, fairs and biennales that ‘conveniently’ fall when he makes these business trips.

I had every intention of going back to at least two of the biennale venues; after all I had two and a half days to myself after Francois left on Sunday afternoon. In the event there was so much else to see that I didn’t make it back to any of them.

On Saturday Francois had arranged for us to visit Sammlung Hoffmann – a private collection of contemporary art in a specifically designed private apartment. It was the first time I’ve visited a real private collection and seen museum quality work on the walls of a private residence. Most of the rooms have no evidence of being at all domestic, perhaps this is what made the dinning room with it’s table, chairs, furnishings and Polke one of the most fascinating. Beyond that was a less formal room with a couple of high chairs and some dried orange peel twisted around the architectural banister – this our guide informed us was a piece by Mrs Hoffman and her grandchildren. As if on cue a door opened and Mrs Hoffmann stepped though. She was, of course, the perfect host and hoped that we’d enjoyed visiting her collection; she spoke at some length about the biennale and the Berlin scene before thanking us and wishing us a pleasant afternoon. 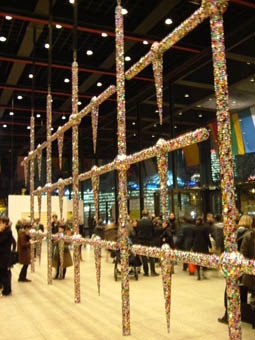 Off to Berlin tomorrow! It's an awful admission but I haven't been before.

Going to the studio this afternoon. We were broken into last week and it's the first time I'll have been since then. Rupert has been and fitted new locks. Nothing was taken or damaged – I'm relieved but also a little hurt, is there really nothing of value there?