Browsing the news pages here I was surprised, and pleased(!), to read that not only is Sally Tallant about to take over as director of Queens Museum (NYC) but that she also has an OBE.  Sally is what I guess I could call (and to mis-quote Julian Clary – I think) my close personal art-world friend*.

Sally was in the year above me at Dartington College of Arts in the late eighties where we were both on the wonderful Art & Social Context course.  Dartington was a small (intimate) school and at the time had only just starting awarding art degrees so there were just two years of students.  To be honest I was rather intimidated by Sally.  Actually I was rather intimidated by most of second year students – they seemed so tough and together, and there was I an overweight, shy, awkward, closeted youg gay man from south-east Essex.  I don’t think that I exagerate when I say that art-school, and probably Dartington in particular, saved my life.  If I had not gone there I am pretty sure that one way or another I more than likely would not be around today.

By the time of Sally’s degree show I was on my way to having some confidence and I summoned up the courage to ask if I might buy one of the paintings in her show.  I think she wanted ten pounds for it.  I still have it and only recently was I thinking that when I (eventually) get around to decorating my apartment it will nice to show the few artworks by other artists that I have – of course including Sally’s. 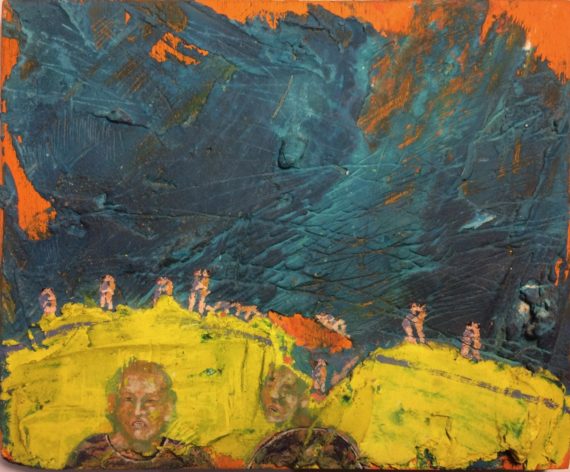 The next time that I meet Sally was about six years later when I visited Bristol (where the Art & Social Context course had moved to a couple of years after my graduation) to ask a former tutor to be a referee for my application to the Slade.  Sally had gotten together with the tutor – another Sally – and they were both involved in the contemporary performance art scene in Bristol.  Thankfully by this time I was a much more mature person and was able to enjoy their company and hospitality.

I was accepted at the Slade and Sally at Royal College on their curating course.  We met up a number of times during our first years in London.  While I was dealing with the deaths of two close friends just as I was finishing my MA Sally was good at inviting me to the openings and events at the Serpentine where she had started in the education department.  When the Serpentine went stratospheric and openings became strictly A-list Sally and I used to see each other at other galleries.  I remember telling her about my plans to move to Sweden at the opening of the Royal Academy’s Summer Show.  It was about the same time that she had just been appointed director of the Liverpool Biennale.

And now I read what for me is a double whammy of her OBE and her move to Queens Museum.  The fact that I read about it rather than hearing it from her directly shows how we have lost touch again as our paths have taken us away from London and in very different directions.  I can not call Sally a friend now – to me a friend is someone whom I have regular and personal contact with – however that does not prevent me from being delighted to hear about her success(es) and wishing her all the best.

One thing that New York City and Enköping have in common is that they are a far far cry from the hilltop art school in the heart of the Devon countryside.  Life is fantastic and I hope that I never cease to be amazed at how it unfolds … I wonder if Sally and I will run it to each other at some time in the future.  It both would and would not surprise me!

* I am pretty sure that Julian Clary used the phrase ’close personal show-biz friend’ to refer to celebrities that he didn’t actually know, or not well enough for the to be really close or personal friends.  The insertion of ’show-biz’ was his way of referring to the lovey-ness of his profession where it can seem so important to give the impression that one is on intimate terms with the stars.