It was my neice's 1st birthday this weekend. There have been a couple of occasions in the past year – and perhaps even a few months before that – when I've found myself thinking that now I'm an uncle I'd better get on with being an artist.

The first time this thought came to me I was on my way home one evening. Having never wanted children myself I'd never really thought about how a child would describe what I do. All of a sudden and for no obvious reason I imagine Esme being at school and talking about her family; mum's a writer and editor, dad writes computer programmes, my uncle says he's an artist but he works in a shop a lot of the time ….

And there it was. I say I'm an artist but is that how she'll see me? And why does it matter? Does it matter? I don't really like to admit it but it does matter. It matters more than the rest of my family, my friends even other artists. I want to be successful for her, I want her to be proud of her uncle.

So I reckon I've got about another five or six years … The first one hasn't gone too badly – I've done more in the past twelve months than I have in the last couple of years.

As a single artist (that's how I see myself even when I've got a partner) I got good at living within my means. So long as I was making art I was content – I never really got that bothered about exhibitions (though perhaps that was something I said to make the frequent rejections less painful). That's changed. Not only do I want shows, I want good ones! I want to be taken seriously as an artist so I better take myself seriously.

Deep down I know that this isn't really about Esme – but she's a great totem. Does it really matter if I use her as a bit of a 'signifier'? As I wrote that I realise that is exactly what is she is – a signifier of a future generation! My ambition now seems considerably more arrogant – I want to be signficant to future generations! I think that this might be a good time to end this post …. 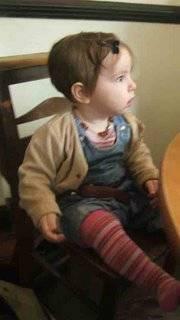 Jodi (my studio-mate) and I getting competitive! In a healthy way, a health that in no small way comes from our practices being so different. I'll explain; we're getting competitive about the amount we're each doing to develop our own practice. What's great is that we're not in competition with each other as it's unlikely that we're interested in the same opportunities. Recently we did apply for the same residency and I'm pretty confident that the selector's decision wouldn't have been between the two of us (maybe I'm wrong). As it is neither of us has heard back so we're both assuming we were unsuccessful this year.

A few of us from Crystal Palace Artists got together last week to start some peer mentoring. Linda Duffy got us together after having met with each of us and noticing similarities in intention if not medium. I'm hoping that it will be a space for us to discuss work and ideas.

When I down-loaded pictures from Frieze I found the last few I'd taken of Bed, live work. It was strange to find them like that. They were taken at a bad time (personally and professionally!) and perhaps I was deliberately leaving them for a while. The piece was supposed to disappear 'naturally' over a period of time – I'd imagined it being worn away by passing feet, or the rain. As it was an over zealous and under informed member of staff started cleaning it away. The pictures I have are of what remained after their effort to remove it. I took the decision to finish what they started. (Note to self: I must make sure everyone knows what's going on when I deal with multi-staffed arts organisations.)

I’ve been thinking about what I wrote yesterday – I’m not happy with it and was going to edit that entry but I’m going to leave it and see if I can’t unpick a bit of my uncomfortableness.

I also started going through my catalogues and notice that the Frieze catalogue has the most notes.

I accept that being an artist rather than a buyer I’m not the target fair audience however in the past I’ve left Zoo feeling excited about being an artist (even one without a gallery). This year was different.

I know that fairs are an essential part of a galleries year and must surely generate (directly and indirectly) a great deal of the income that enables them to put on more experimental shows. Perhaps I’m looking in the wrong places, perhaps I should make more effort to get to gallery shows and shouldn’t expect the fairs to showcase new and exciting work…

*I use Frieze as a bit of a catch all term for the fairs, events and shows in mid October London

It makes me feel internationalI like to see what sells to who for what – it’s the only time in the year when I read the Art Newspaperthe world comes to Londonit’s a great time to catch up with friendsseeing the Collector on mass I enjoy spotting ‘trends’; drawing, folk imagery, portraitureit’s a chance to dress up

Frieze is becoming like January 1st or April 5 – one of those dates that marks a new year. A time to reflect on last years achievements, a time to make plans and resolutions.

This year I started off going around some of the fairs with friends. It made me realise how slow my natural pace is and how I like to have time with a piece and to have some context for it. I’ve come away with catalogues full of folded page corners – now the real work begins; following up artists and galleries. And of course trying to figure out where I fit in all of it.

Last year I said that I wasn’t going to go to Frieze itself, I said I’d concentrate on the young gallery events. This year I’m thinking that as the young gallery fairs try to be more and more like Frieze I’ll skip them next year and just enjoy the spectacle of the real high end …

I’ve had a stressful couple of weeks – getting used to the new routines with John’s NG tube. There have been numerous meeting with various specialists. Although it saved him from immediate danger I was left in no doubt that his condition was serious. I’m not sure that I wasn’t being ‘told off’ for not noticing the decline in his ability to eat and drink. Things have settled down but learning and remembering new routines is tiring.

As all this is going on I’m becoming more and more interested in beauty, and less and less interested in issues. I have enough issues without inviting them into the studio.

I’m so grateful that I have the studio, and that it’s been quite busy there – lots of catching up with the other artists. It’s good job that I see their achievements as inspirational!

I’m still working on a piece for the clothing-based group show. The show has been postponed (for a second time), it looks like it’s happening in February. Last week the quilted patchwork finally began to show it’s sculptural form. Until then I’d been working on the flat, now it’s a cylinder – it’s taken months to get to this stage. I have to admit that seeing the form lying on the table it looked more like a bolster from a old lady’s bed than a boxer’s punch-bag! Hopefully it’ll manage to refer to both when it’s finished.

The workmen developing the building at the front of the studios left the door to their temporary store open, everytime I see the space I can’t help but fantasise about it being my studio. It would make a great sculpture studio – I must start working out how to make it a reality…