Tomorrow Husets Kropp (The Building’s Body) opens. The building is called Källör and is in the small costal resort of Östhammar, it was built in 1885 as a complement to the hot and cold bathing houses and the English park that already existed. It was the place for summer visitors to hold parties, dances and other social activities. From the 1920s it served as a school during the winter months eventually becoming a school the year around until 2005 when it was abandoned. In 2012 a local group convinced the council to let them take it over rather than it be demolished. This very active group of local people are gradually restoring the building to its former glory, and at the same time they are hiring it out for events, parties, weddings and now an art exhibition.

I mention this because my piece refers to the history, well the more recent history. Amongst the old black and white photographs of early visitors and the royal visit in 1907 that are dotted about the building I spotted a much more modern though still rather ’dated’ looking colour photo. It looked to be from the 1980s and showed the interior  when a nursery school used the premises. This image stuck with me and after working through several other ideas it suddenly struck me what I should do.

A couple of years ago someone gave me two large boxes of children’s films on vhs video tape. They had seen photographs of Play and thought of me when they came across the stash of videos during a clearing out a store room in the school where he works. The boxes have been taking up space in my studio since then as I did not immediately know what to do with them. I like to have a reason or justification for my choice of material, and children’s films were always going to take a while to work with – to work out what to do with.

So my work in the show is an installation made with the magnetic tape from those video films in the room where the photograph was taken in the 1980s. I like the circularity of films from a school being used in another building that had been a school. I like that the photograph that stuck with me was from the 1980s – the height of videos popularity. I like that film itself is not visible on the tape but it is there, in a similar way to the history of the school being there but also not being visible.

The material is black and glossy, it shimmers in the light. It is highly reflective, and can make patterns that simulate bight sun falling on rippling water. Standing where I can see both the installation and the water just beyond the windows I start to think about how the inner and outer landscapes complement each other: the sea’s horizontal ripples matched by the tapes vertical fluttering, the dark of the magnetic bands balancing the pale tones of the water. 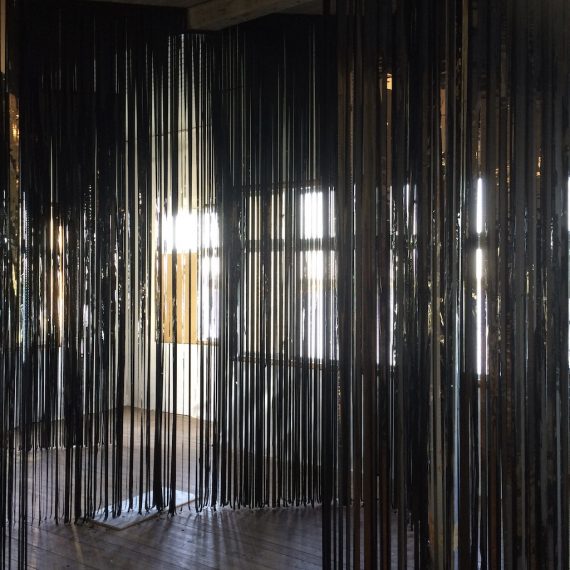 Over six months have passed since our first site visit to Källör. Back in February it was bitterly cold and the ground was covered in snow. Wednesday was a brilliant and warm summer’s day and we enjoyed lunch outdoors in the cool shade of the building. I am very pleased with how my piece, ’Lek’ (Swedish for play), looks. Tomorrow I will find out if other people like it.