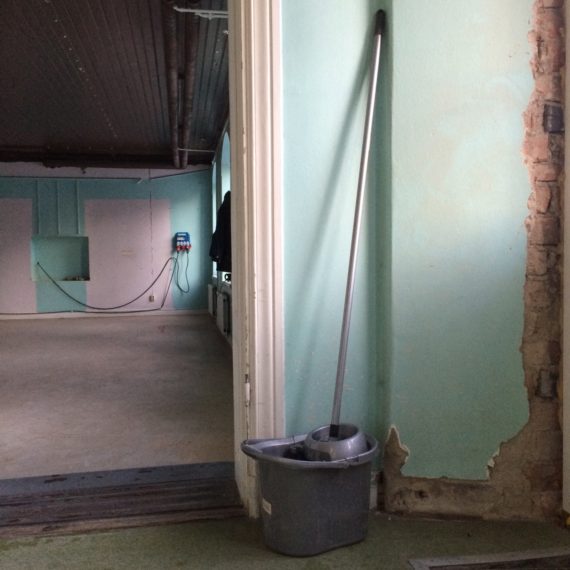 At 9.30 this morning I am going to meet three artists at the studio – hopefully they are interested in sharing the other large space. A fourth artist who is also interested in being part of the studio group is away until later in the week.

Klas and I spent Thursday at the studio and made good headway getting things in order – at least to point where we can start to move things over the old studio. The place was covered in a thick layer of ‘builder’s dust’, then there were the heaps of rubble, piles of torn-down electric cables, odd bits of old plasterboard (some of which we have salvaged), general scrap and a ‘wood effect’ plastic concertina door that needed dealing with. It seems that as soon as permission to make new windows was denied the builders simply packed up their tools and left.

In the process of cleaning we chatted about how we want the studios to be: a dynamic and inspiring workplace for those of us there on a regular basis, but also a place where there can be ‘open workshops’, courses, temporary exhibitions, and guest artists – all making use of a ‘project room’. Two adult education organisations have expressed an interest in taking on a studio/room and although this is an attractive offer we came to the conclusion that it might be better for us if they hire/book the project room at a ‘day rate’. This would enable us to make best use of the space and maintain the ‘artistic identity’ of the studios. We are also very clear that we are starting a process and that things will shift and develop organically as we get going.

It felt very good to be in the space – the rooms are well proportioned and the natural light is very welcome after a year in a studio without windows. The dated and somewhat peculiar colour scheme is far from what I would choose however it is not something that we are going to do anything about for the foreseeable future. If we get a long-term contract it would be worth the investment of both time and money. For now it is definitely a case of ‘make do and mend’. In our current studio Klas and I each adopted one of the two adjoining spaces, the new studio suggests new ways of thinking about space and we have decided to divide the room that we will share into separate ‘clean’ and ‘dirty’ areas – both of which we will share. As we both work with materials/projects that range from the terminally dusty to the almost clinically pristine this arrangement should work well for us.

Not only is there daylight in the new studio but there is also heating (and even a bit of basic ventilation). This means that the working environment is not only more pleasant for us but also more favourable to our materials. It is possible to have paper and fabric there without the worry of them getting mouldy or otherwise damaged. So all the stuff that I dared not have the old studio (finished pieces and raw material) can be moved out of my apartment and I will have a proper bedroom for the first time since moving to Sweden (in 2011)! For this and many other reasons it feels as though I am embarking on something that is very ‘grown-up’.

With the group show in London and the two-person show here not far off I am keen to get in and get on!

The new studio is going ahead! Klas signed the paperwork and now we are just waiting on getting the keys*. It is fantastic and is going to make a huge difference in my life – I cannot describe how much I am look forward to having somewhere decent to work. Just the thought of it makes me more determined to find ways to make my practice financially viable in and of itself. It might well be time to prioritise all those various funding avenues still available here in Sweden.

What I really need to be getting on with is preparing for the two upcoming shows.

One large hollow polystyrene ball (500mm diameter) ordered so that I can see how it looks glittered and work out how to hang it. It will be good to know how much it weighs when it’s covered in glitter … and how much glitter it takes to cover it!

Two more Hermés style scarves found in a local charity shop today. I need to pull together pictures of the pieces that I am interesting showing so that Klas and I can start to plan the show. The Hermés piece would be great in the garden!

My annual proofreading of the Supermarket art fair catalogue entries and magazine texts is almost completed. The task has been far easier this year as Alice, the project manager, has acted as editor so the majority of my work has been making simple corrections to English language and grammar – I have deleted what surely amounts to a sea of commas, Swedes seem to want one after at least every third word, whether, it requires one, or not. My reward for doing this unpaid work is getting a place on the fair’s Professional Networking Participants’ programme. I did this last year too and it was a great experience. I look forward to meeting with both existing and new colleagues over the four days of the fair.

*We are in now in discussion with a rather wonderful Swedish organisation that promotes and supports smaller reading/learning groups. They are interested in taking over the head-lease of the building, this would enable us to hire just our studios and if we run workshops or regular artist’s meetings we might even get a subsidy!