Yesterday I had really interesting conversations with three visitors at the show/live work. Not having had the time to write (nor even reflect!) since coming in the gallery last Wednesday I feel as though I am ’out of order’ – I want to think about what is happening in the gallery but have not yet processed things that happened before that.

The last week or so has been an important reminder of the importance of giving myself time and space between things. This is something that is much lacking in my current schedule, and which certainly was not helped by being completely wiped out by Covid for a few days – and even once I was over the worst of it (a feeling of complete physical and mental exhaustion) I remained tired and unable to focus for another ten days.

I was also reminded that filling my schedule to capacity makes it very difficult to deal to with unexpected additional demands, challenges, and events. Just as I was starting to feel better and able to do more than lie on the sofa watching old films came the news that there had been a series (!) of break-ins at the studios in Uppsala. My studio was broken into over Saturday night and Sunday morning. If I had not been in quarantine because of the positive Covid test result I could have gone over to assess the situation on Sunday afternoon. As it was a colleague let me know that an empty camera bag was lying on the floor. I (correctly) guessed that my rather expensive cordless drill had also been taken. My quarantine period was over on Tuesday which was fortunate as that afternoon I was covering a children’s workshop for an artist friend who was also in Covid quarantine. The workshop was in Uppsala so I planned to go past the studio on the way there. Just as I was setting off I received the message that the studios had been broken in to again on Monday night, and that the police were on their way to carry out another ’technical investigation’. I arrived at the studio to find, and join, a small group of artists in another part of the building where they were waiting for the police to conclude their investigations before being allowed in the studios. The police investigation was not over by the time that I had to leave to do the workshop. Wednesday morning I had a meeting at the gallery which I had to attend, and in the afternoon I had my first workshop with another group. So it was not until Thursday morning that I had time to go the studio and see what state it was in. Fortunately the thieves had not done more than take the camera and drill, there was a little evidence that they had gone through a stack of boxes containing materials but nothing was damaged. I guess I might find that other things were taken.

The break in of course produced reams of messages and emails all of which had to read if not reacted to. There was an online ’house meeting’ – which I have to say seemed somewhat surreal in my post-infection state of tiredness. The studios are in two distinct corridors, the one that was broken in to was the north corridor, for some reason sitting at home in my dressing gown listening to remote animated discussions about ’securing the northern corridor’ evoked images of early polar expeditions and historic military manoeuvres (first World War? Crimean?).

By Friday evening the materials that I wanted to have for Transformer were mostly in place at the gallery. However the week had been so unexpectedly hectic and chaotic that I while I was looking forward to starting the ’live work’ I was very aware that I was not really prepared for it.

To be honest Saturday and Sunday are a bit of a blur. There was so much to think about in practical terms of literally opening the gallery – putting out the signs about social distancing, making tea and coffee (chosen in preference to wine as this was not a ’vernissage’), mopping the uselessly pale floor (again), remembering to check the toilets – that when the first visitors arrived exactly as we opened I had not had time to think about how I was going to present (introduce?) what I was doing.

Looking back now I realise that, even if I had not been tired, I took on way too much. The anxiety that I was feeling all week was not good. Of course a little nervousness is to be expected before a show but what I experienced was very almost overwhelming. I do not think that this is the first time that I am reminding myself that I can not operate at two or three hundred percent capacity. Or rather, if I do then the operations are neither particularly successful nor enjoyable.

The question that I need to seriously and honestly answer is why do I behave like this.

There is  a quote attributed to both Mae West and Liberace on the lines of ‘too much of a good thing is wonderful’.  This might be true, however the same might not be said of too much of too many good things!

The week has not been at all I had had expected. Yesterday afternoon I received confirmation that I have had Covid since at least Tuesday. I started feeling unwell late on Monday morning – thankfully before heading off to the studio in Uppsala as I had planned. The news means that I have another three days of isolating at home, which conveniently takes me up to Tuesday when I start hands-on work with the children’s art project in Uppsala.

To be honest I have quite enjoyed being at home and not feel the pressure to get on with things … not having the energy or focus to get on with things if I am going to be completely honest. I had a couple of online meetings but it was not until yesterday that I was able to think clearly enough to put together and send out information about the show that opens next Saturday. ’Sending out information’ is a pretty accurate description of what I did – the neutrality, mundaneness, and monotone quality of that phrase captures the mood of letting people know that something is happening without actively inviting them to come along. Ambivalence is perhaps an appropriate word that goes some way to describe how I feel about the show – a show which is very very far from how I imagined it being whether I am referring to when it was first mentioned back in autumn 2018, or even as recently as December when I was planning a programme of workshops and events. It is not surprising that the show has gone through, in my head in any case, many iterations over the three years. Perhaps naively I was not expecting to have to make such last minute changes that the current pandemic situation and the return to previous Covid routines require. On Monday evening the Artists’ Club committee, of which I am a member, took the decision to halt activities other than opening the galleries (with severely restrictions on visitors numbers at any one time) and allowing the studio to be used for the children’s Saturday workshops (again with certain restrictions and following government guidelines for such programmes). This decision will be reviewed in a month which is exactly when my show closes. 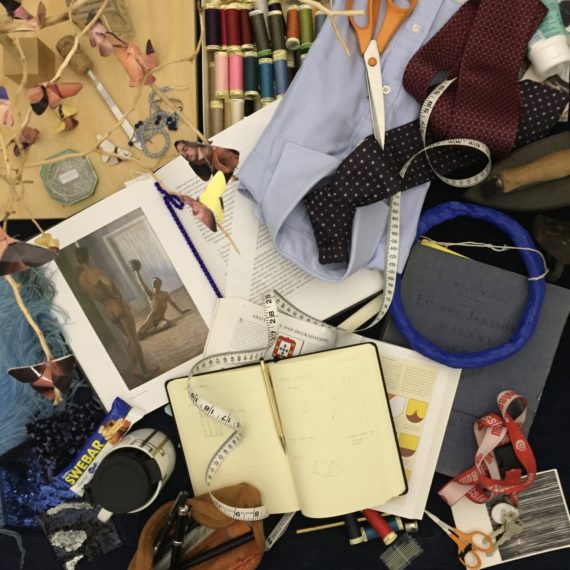 Speaking with my artist friend K in the week we discussed how presenting live work to a great extent negates the requirement for a separate and distinct programme of events. Visitors are welcome to pull up a chair and chat with me while I am working (at a distance of course), there will be materials available if someone wants to make something themselves, and many of the references and inspirations for the work will be present. The atmosphere of the live work should encourage discussion between visitors as well as with me, and if it is possible to arrange a somewhat spontaneous event, be that a workshop or ’fika’, in February then I can always do that.

One thing that is clear to me is that I am not particularly keen on doing anything digital or online. What I am not so clear about is my motivation for this. It could well be that it is just too much to think about at the moment. It could equally be that it something digital might develop over the course of the work. One of the nice things about this live work is that the piece can, and will, evolve over the period. The structure for the work is both very flexible and very accommodating. The list of potential components continues to grow and despite my earlier reflection about feeling ambivalent, I am genuinely intrigued to see what happens over the twenty-three days. Is it possible to be generally ambivalent and specifically intrigued simultaneously?

Please note limited visitor numbers in the gallery at any one time, please be prepared to wait for admittance.