This time last week I was sitting down to dinner with Christina after a great afternoon at Supermarket art fair.  This is the eighth year that I have visited the fair and each year is a unique experience!  There is always slight edge about the whole thing and that is exactly what makes it vibrant and vital.  Some stands host on-going projects that develop over the four days, others make slick presentations that make me wonder if they aspire to be commercial galleries or if they are pastiches of blue-chip spaces.  Most booths fall somewhere these two extremes and I found myself drawn to these. It was great to have a good chat with Felipe Castelblanco of Mote 078 Gallery.  It is always interesting to learn a bit about the person behind such an initiative.

I also caught up with some artists who I know from courses at Mejan, and saw work by artists from around the world that I found fascinating and inspiring.  I might be re-assessing my resistance to the term ‘artist/curator’ not only were there great pieces and projects curated by artists but the whole event made me realise that I could be interested in organising shows or events – just for the fun of it!  This might also be the result of no longer living in a city full of art and artists – there is an obvious lack of opportunity to see contemporary work here so the idea of filling that gap has a certain appeal (even if it has a very uncertain audience)!

It is the tenth birthday/anniversary of Supermarket – and not surprisingly there were both reflections and projections about the artist-led scene.  One of the most pressing debates was about remaining independent – what does these mean today and how can it be achieved.  ‘Independent’ of what?  This is of course a key question.  I realise that I have remained wonderfully independent (in some senses – no gallery, no external commitments or responsibilities, no-one’s agenda but my own …) however I do not think that this was the kind of independence that was being discussed.  I am not always sure that my independence has been particularly rewarding – in fact I am pretty sure that it has been the opposite, it has been pretty expensive!  Independence can be something of a luxury and while I whole-heartedly support every artist’s wish to remain ‘free’ I do wonder how sustainable it is and what it actually means.  Independence here in Sweden has tended to mean independence from the commercial market, and at the same time it has tended to mean a dependence on state, or local, governmental support – either directly or indirectly.  Sweden seems to be going through a slow but progressive shift way from socialism towards to capitalism, and of course this is being felt across the arts.  This affects not only direct funding of the arts but also the attitudes of the private individuals that comprise a city, a town, the country.  One of the longest established and most well-known artist-led galleries in Stockholm has been presented with a massive rent increase, an increase that they simply can not meet.  At least three large studio complexes in Stockholm are on ‘demolition’ contracts and waiting to be replaced with apartment blocks.

Artists have a good track record of ‘rising to the challenge’ and finding ways to survive and thrive, and this is what makes the future exciting. It also makes networking, collaboration, discussion and cooperation essential.  And these were abundant at Supermarket, and perhaps in the context of city’s feverish fetishisation of capital this is what made the fair feel even more vital.  I wish that I had been able to be there for the full four days and to have taken part in more of the programme, I think that I need to put next year’s event in my diary now and make sure I do not agree to do something else at the same time!

It was lovely to open the Supermarket magazine and see my name as one of the production team.  Although it might be obvious I had not thought of my work with translation, language/sub editing and proof reading as part of the publication’s production.  I am very grateful to whoever put my name on that list – thank you! 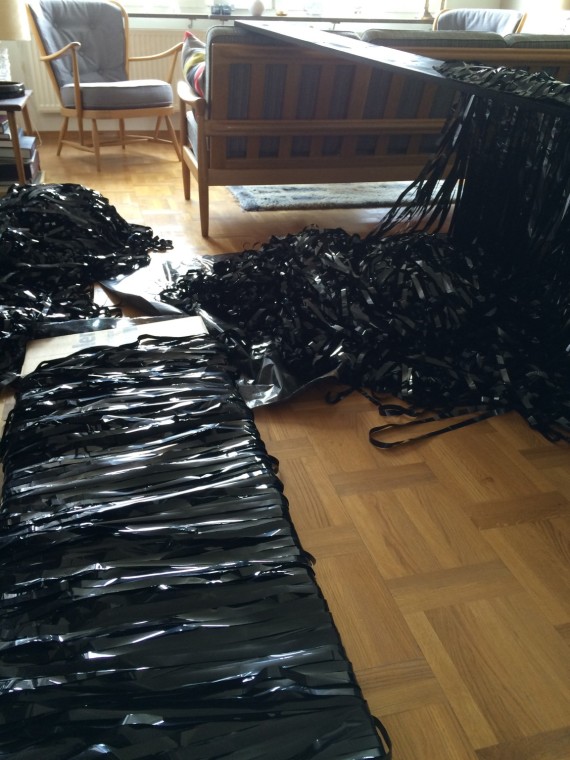 For the last few weeks I have been reading and re-reading the texts for the upcoming Supermarket catalogue and magazine.  This is the first year that I have really been involved in the magazine side of the publication – which has involved some translating too.  It is also the first year that I have been working full-time during the preparations and I realise what a different experience it is to sit at a computer from 8–12 midnight rather than 8–12 noon, I am mostly definitely a morning person!

It has been very interesting to read about the development of the fair from it’s initial low-key and small scale beginnings to being Sweden’s (if not Scandinavia’s) largest art fair during its years at Kulturhuset.  And it was while proof reading a text about the fair’s annual residency at Kulturhuset that I saw the reference to Play.  I was part of the MOCA London team organised by the wonderful Roberto Ekholm and supported by the ever-energetic MOCA director Michael Petry.  As part of our presence we had arranged that Play would be installed where it could be shown to good effect and where people could walk through it, the piece is quite large and would not fit on our stand.  The evening before the fair opened there were a few tense hours when Kulturhuset‘s safety department threatened not to allow the fair to go ahead if my potentially supremely hazardous artwork was not removed.  Eventually shifting it about 40 centimetres resolved the crisis and the fair was given the all clear.  The event is still clear in my mind but I was somewhat surprised that it had made such an impression on the organisers who were now giving an account of the ‘struggles and successes’ that they had encountered.

It has become something of a modern tradition to have open studio events over the long Easter weekend, particularly outside of Stockholm.  I wanted not only to see what other artists around here are up to but also to see where they are doing it as I continue to look for a studio.  There were a total of 38 artists showing their work at venues in the town centre and across the Enköping region.  I did not manage to see them all, choosing to focus on ones in the town centre (hoping to get some idea of where artists have found to work) and then making a selection of more rural studios based on the group show at museum.  In many ways it was not so different from Signals that Crystal Palace Artists used to do – a good mix of styles and media shown in a collection of studios, temporary exhibition spaces, and homes.  It was nice to visit the ceramic studio of Anne who I had met at an opening earlier in the year – I like her work too.  It was interesting to see that one painter had his own gallery and studio in what must have been a small shop.  Another artist was showing in a great space that looked as though it was also used as a yoga studio.  I saw a good number of artists and places that I would not have known existed otherwise, and it made me realise that there are studios to be found.  I just have to make time to get on with it, and not be afraid of asking for what I want (in ‘awkward’ Swedish)!  The my day finished at the home studio of an artist who is keen to start some kind of informal artists’ group, I would certainly be interested in getting involved.

My day seeing the more rural studios was not so intense, in the end I only made to two studios and a new exhibition venue that was not strictly part of the ‘Spring Art’ programme.  The two studios were both, and differently, inspiring.  Both artists were very generous with their time and talked not only about their own practice but their involvements with collaborative and community projects.  Again it felt really good to be reminded that there are opportunities to pursue those ways of working here too.  The exhibition venue at Målhammar is the ground floor of one of a pair of an eighteenth century houses that are all that remain of large country estate – and was great!  It had been on my ‘to visit’ list since reading about it in the local newspaper, and I got the chance to speak with both the exhibiting artist and the owner/director while I was there.  It was really good to meet them both and to hear about what they are both doing.  I could not help but start to dream of having a show in such a space – it could be a perfect place not only for some of my existing pieces but also two or three new works which as yet exist only in notes, sketches and jottings.

I am aware of an acute sense of embarrassment at giving people postcards of Play, not because of the work or image of it – both of which I am very pleased with.  Rather it was being reminded that I still have not gotten material together so that David and Lucy can update my website, Play is the most recent work on it – and it is from 2010.

And finally – there is a mini-Play that I had almost forgotten about.  I made it for the MOCA London booth at Supermarket so that visitors would make the connection between the installation by the staircase and the stand that we had in the fair.  The lengths of videotape fit perfectly from ceiling to floor in my flat, and being only about 50 centimetres wide and 20 centimetres deep I thought that I could easily mount it at right angles to the wall so that sticks out in the room.  I am intrigued to see if I can bear to live with the fluttering of the tape in the slightest breeze.  I am also intrigued to see how I might be able to use my home to show my work until such time as I have a studio, and even then it might be more interesting to show older pieces here and keep the studio as a working space …