After coming a "very close second" (again) I’ve decided to take notice of what’s happening and STOP applying for jobs! I’m obviously supposed to be an artist and not an employee – why has it taken me so long to work that out? So that’s few hours a week of trawling in the internet saved.

I’m really grateful to Caroline Smith for programming me into her Day of Intimacy (CP Artists, Signals 5). It’s re-introduced me to writers and performers. It feels like it might be the right time for me to re-engage with live art.

A crisis in John’s condition was narrowly avoided at the end of last week. He’s been losing weight rather rapidly but became dehydrated too. He was rushed in hospital and had a naso-gastric tube fitted. This means that he can get sufficent fluids and nourishment again.

It is any wonder that I’m getting more interested in ideas of beauty, getting more fascinated with materials, getting more attracted to connoisseurship . I need to believe there are things that aren’t tainted, aren’t spoiled, aren’t shadowed by misfortune. 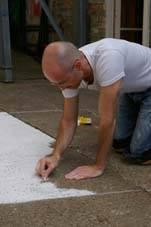 The live/durational part of Bed was completed at 4.55pm on Saturday (started at 12.00 noon). The day was really good and I’m really pleased with way the piece turned out. The completed drawing surprised me with it’s beauty.

The process was both formal, in that I had a pre-determined task to complete, and informal, in so much as I chatted with my ‘audience’. Conversations ranged from the sizes of people’s bed and sleeping habits to the expectations one brings to looking at art. A woman stall-holder at the nearby market came three times to see the piece. On the second and third times she brought different friends – she initiated a heated discussion about what is and what isn’t art.

I hadn’t given much thought to how the finished drawing would look. It’s beauty caught me unaware and I found myself smiling and feeling very proud if it. There were a few moments when the drawing had the same quality as the sky above it. It was almost as if it stopped representing something real and took on a realtionship with light and space.

The piece will now be left to weather. I will go back and take periodic photographs of its erasure.

This was my first live work in about six years – I want to do more ….