The increasingly intense exploration of drawing, and the threads between words, sounds, music, lines…

There is a sweet spot I think, in the middle of a project, or perhaps closer to the end, when activity is high, one becomes a little more visible for a little while. During this period, I find it’s really good to get the word out, spread the goodness, and actually capitalise on that fleeting higher profile to make connections and inroads into places you don’t dare to do on an ordinary day. When confidence is high, strike while the iron is hot! Mix your metaphors or get out of the kitchen!

This is the time when you feel able to send speculative emails, because, when the project is finished… (in terms of funding, and the evaluation has been done and submitted etc) you need something to look forward to. Not immediately, because, you know “The Slump” will undoubtedly hit once the adrenalin has subsided and you’ve stopped grinning. But something a few months ahead. Perhaps a small collaboration, a conversation, a little self-indulgent self-review when the dust has settled.

So this is what I am doing at the moment. I call it The Business of Art… I’m not that good at it, and I’d rather be drawing and singing, but if I am to get anywhere (whatever the hell THAT means) then it has to be done. I have to neaten the edges, make a plan. I’m quite good at getting an idea for, and planning the project and delivering it, but I can only do one thing at a time. I can’t look at the next thing until I’m nearly at the end of this thing… I shall hopefully find a small island of something to aim at, while I rest, before thinking of the next BIG thing, or series of little things.

The initial plan will be to allow The Slump, enjoy Christmas, allow for a bit of shitty weather and then, come Mid February, I will be wanting something else…

Yesterday evening I was presented with my certificate for being elected an Associate of the Royal Birmingham Society of Artists.

During the speeches by the president of the society Steve Evans, and Brendan Flynn, RBSA Professor of Art History, they spoke about the society and its archive. It was listening to this and seeing examples of object files of other artists that it really hit home I’d become a part of this fairly small group of artists, selected and elected for “Professional standing and distinction of work”… and that from now on an official record would be kept of my work and achievements, alongside all the other members since  the early 19th century.

I was also called a “groundbreaker”… I am the first artist in those 200 years to have submitted a sound piece in my candidates’ exhibition.

It does feel a little unreal.

I was brought up in a time when one didn’t “boast” about ones achievements… whilst also being told not to hide ones light under a bushel.

So I wanted to write this post, not as a boast, but as a statement of fact. I belong to this group, I feel part of it, have been welcomed with open arms as the artist that I am right now, doing the work I’m doing right now. Acceptance, acknowledgement and validation for what I do.

I do feel emotional. It feels great. I’m sure there will come along inevitable feelings of self-doubt any time soon, but for now… I’m sat on the top of a big hill looking around me. For a while I wonder how I got here, and then I remember how hard I’ve worked.

Huge thanks to Steve and Ed Isaacs for their nomination and continued support.

Sometimes the next logical step turns out to be very disappointing.

I have had in the back of my mind that maybe I should be very specific about my drawings, and that I should do a drawing from each song, reacting to that song, and just that song.

I’d been avoiding doing it as quite honestly it seemed like a bit of a chore. Prescribed rather than organic. But today I gave it a go. Now, it was an interesting exercise, but I don’t think these will be exhibited or published works. They’ve turned out to be rather too illustrative, representational, rather than my preferred response which tends to be reactive and emotional. What they are, I suppose, are visual scores. Anotation. This is not what I am after at all. I am reminded of Tim Ingold’s “Lines” and the discussion about music lines being performed, in comparison to music lines on the page.

What happens when I allow myself longer to draw, with a mixture of music, is a much deeper, possibly lazier response. Lazy isn’t the right word, but something less directly purposeful…?

Aiming for an exhibition is a wonderful thing, and very useful for me, for many artists I’m sure. You start to find the language to surround the project, to express verbally, as well and in terms of the visual and the audible… It will mark a point of reflection. The view from the top of the hill, looking back at what you’ve done, how far you have come (maybe?), so you can start thinking about where to go next perhaps.

I think what will happen post-project is that I will calm down a bit, and stop trying to tie it all together. I think, having done this project that proves to me it IS all tied together, I don’t need to try so hard, but just let it happen.

I’m really looking forward to the exhibition and the events I have planned to go with it. But I am also starting to see life beyond it, and look forward to relaxing into what I’ve learned over the last twelve months.

My last blog post showed me doing loads of stuff, these things are now done, and things have settled down a little bit. Maybe. To be honest it is a bit of an illusion. Because I have now started to think about what my final show/event/exhibition thingy will look and sound like, and what I need to do to get there.

The dates of this will be 23rd October to 7th November if you want to make a note now, although it will be all over social media like a rash when everything is confirmed.

The drawings are the easy bit. I need to get a few more of the recent works mounted, and/or framed. So once decided, off we go. And I have quite a few done already, that have been previously shown at the RBSA, but it will be good to put all sorts up together too, to show a progression and the development of ideas.

The songs are coming along nicely too. Eight out of the proposed twelve are finished: Mike and I have a list of things to do in order the finish the remaining four.  This will undoubtedly require a trip to Devon, which I’m really looking forward to! A working holiday/mini-break thing. Fab.

I have decided to commission Bill Laybourne to create a sound piece, using the stems of the song recordings, for me to draw to LIVE! With an audience … if people do indeed want to come and watch such a thing. I shall do a Drawing Songs workshop, and an Artist Talk too. That’ll do I think.

And then no doubt the post project evaluation and subsequent slump. Just in time for Christmas! 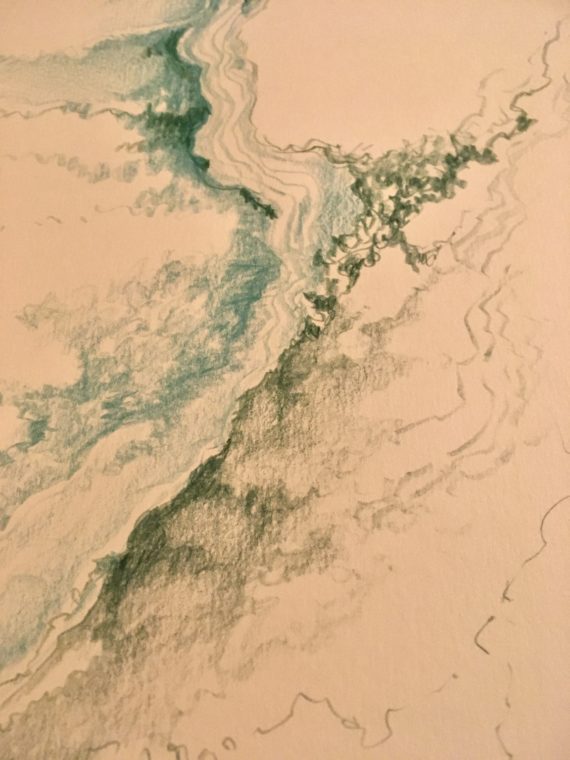 Since spending the week in the gallery space working on the Large Drawing I have retreated to home, thinking that I would be actively processing the experience, thinking deeply, making notes and plotting my next move. Instead, I found myself physically and emotionally exhausted, finding solace in a spot of baking, gardening and a little light housework. I’m sure my hind-brain has been working on it, but not consciously.

It took more out of me than I expected. In a good way though. I have at least formed the opinion that it was good, and I’ll do something like it again. That sort of brief but positive self-feedback will do for now.

I’m doing my first voluntary stewarding at RBSA on Saturday. I’m there for the whole day, which may have been optimistic… but I’ll give it a go… I can pull back next time if it is too much. I’ve also done a bit of hole filling and sandpapering with them. On Sunday I went to a studio sale there. I bought a box of old pens and nibs for a tenner. On the way home I took it into the studio, placed it on the empty table along with two clean sheets of paper, leaving myself a gift for my next visit, so I don’t have to think too much about what to do next.

I’ve also joined a small group of artists (called Collective Brum if you want to look us up on Facebook and Instagram) who have taken a small selling space in Digbeth’s Red Brick Market for six months (initially). It’s a bit of a gamble, and a bit of personal investment… very speculative as I have no idea if the works I have prepared will sell enough to cover the investment, but we shall see. I have small works, some framed, some mounted, some naked… starting at £10, nothing over £60. We shall see. I am glad that I am riding on coat-tails for this though, as I have no mental capacity to take on anything else. I don’t make-to-sell as such, but my studio is bursting with stuff that can be sold, so I have to give it a go at least… I feel… and they’re a lovely bunch.

In the music part of my life though things are picking up speed.

I went to a gig by my friend and erstwhile (if not still-while?) mentor Dan Whitehouse. I did find it a bit emotional to be honest. Just being there and hearing and seeing, participating in that shared audience experience was truly nourishing after all these months. And just to see his real face and hear his real voice. Deep sigh…

While there Dan introduced me to a man from a local radio station who plays music that is somewhat different to the usual offering… and after much chatting about art and music, I ended up sending him some songs, and a recorded intro to Alarms, which he is going to play on Saturday lunchtime. This has given me a real boost too!

We have had a couple of band rehearsals, just three of us, and now it looks like gradually the five pieces of us will gather together so that we can make more noise again soon.

Our EP is at the mixing and mastering stage so we will be able to plan a launch for that too… considering we did most of the recording on 29th February 2020, we feel we need to get it out there and let people hear it, and some of the songs we have written while being restricted too.

I have promised myself that this is enough for now, I can’t take on anything else until I have worked through what I already have in my diary.

But of course if something REALLY tasty comes up I have to say yes right? Strike while the iron is hot and all that?