I have just spent about an hour and a half out in the garden, with my new secateurs, hacking hell out of the plants. I’m now really grubby, the green bin is full, I’ve sent the cat into a frenzy because she will insist in sitting behind me and watching, but then gets upset when I chuck stuff over my shoulder to land on her.

I’ve come back in to sit with a really big mug of tea, and a chocolate biscuit. (As I found Franny wisely suggested.)

Then thinking I’ll just check the weather forecast online, I discover even more lovely comments, and feel that a mere thank you in the comments isn’t enough. This is why I carry on blogging, because you are all reassuringly out there, like Houston to my drifting orbit, telling me all will be well. Thank you my virtual friends!

Feeling a little bit frustrated. I am talking to people and writing stuff, managing things and what-not. But I’m not actually making anything. I am setting things up, talking about my work, putting things in place. I’m having meetings. NOT MAKING!

The trouble is I have to set all these things up before I can make anything, so I’ve got a reason to make things…yes, I know I should make things anyway… don’t go on at me!

I want to have exhibitions and residencies and workshops and stuff. These things don’t appear magically out of thin air (not for me anyway). So I have to administer. I have done days and days worth of work, and feel I have sod all to show for it. It could all just not happen and I have wasted my time. I would like just one of these ideas, however small, to actually happen. Then it would feel real. I feel like a fraud. I’m talking the talk. But the walking the walk bit is not happening. I’ve met lots of lovely new people. They make lots of interested noises. BUT I’M NOT MAKING. I’m living off past glories.

I need someone who has done this sort of thing for a while to tell me there are periods like this, then I will be making stuff. Is it like this because I have just started out on my own, post-MA? 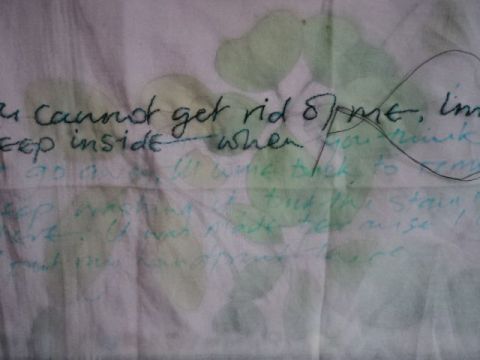 Had a chat and a cup of tea today with Odilia from Hub Stourbridge. It was originally to do with me doing a bit of social media with them but the discussion expanded somewhat. The Hub have no premises as yet, but are searching hard for that elusive place that provides what the community needs. Tricky. Central position in the town? Parking? Cafe? Computers? Meeting rooms? Exhibition space? Creative spaces? Performance space? It’s probably one of those impossible tasks to find the perfect place to tick all the boxes.

However, if Odilia is anything to go by, they have enormous energy, motivation and a desire to provide a centre, a hub, for people who need one, creative or otherwise. It’s very exciting to think I could be in on the start of something so innovative. To be able to affect the way that people work and relax, possibly in the same place. I felt I would be among like minded people, who have an incentive to make this work, whether that is for professional or personal desire, or a general buzz of altruism… although I don’t know if that really exists…

Anyway, word of mouth and word of keyboard is how these thing really get off the ground, so please click on the links below, wander about, fill in a survey, and watch the story unfold over the following weeks and months!

Hmmm… Today I spent a quiet hour getting to grips with all the things I mentioned in the previous post. I drew a little diagram, as I often do, containing all the projects small, large and ridiculously ambitious, that are lodged in my head. Then I spent a little longer with coloured pens, highlighting the things I had done towards getting them to become real. Some things look scarily close to being submitted, ready to launch, whatever. Other things are laughably far away, and need a lot more research to even discover if they are viable. What I discovered about myself is that I have probably started down too many roads at once. This is probably in a bid to ride the crest of the MA enthusiasm wave… to keep the momentum going.

Anyway, the momentum IS still going… you may have noticed the incredibly silly postal sock project I’m doing with Sophie Cullinan…

… well that is up and running, and to make sure you all take it very seriously, we have a bona fide mathematics person on board. He blinds us with science. In fact he has blinded me with science since he was about 10, as he is my son. He says very clever things, and I let it float over my head a little and I then go ooooh at the pretty diagrams, that explain the flow and growth and networks….. Then I glaze over… somewhat sooner than Sophie I fear!

I also have finished writing that proposal… not telling you what for unless I get it, but it does involve clothes, embroidery and words and music. I am waiting for a couple of people to read it through before I send it off.

The GOING PUBLIC project-to-be with Franny and Julie…

… that’s bubbling along nicely, and we will soon be meeting for the first time, and I can’t tell you how exciting that is.

I also have a little eastern European idea… research ongoing….

And then there’s me and Bo, two very different artists, who seem to have found a commonality that links us, and makes us want to work together. I have no idea when that will happen, but we are both determined it will.

My problem is with the timescale…. As I’ve said in a previous comment, I’m going to be up a certain creek without a paddle if they all happen at once!

I’ve got a few projects in my head, some big, some small, some quite realistic, some outrageously ambitious. But that’s where they are, in my head, some are half typed. I need to get something off the ground before I lose the plot.

Tomorrow I MUST finish the half typed, get someone who knows what they are doing to read it (ahem hem, heads up Franny and Julie) and get it sent off. I think, at the moment, even rejection letters would make me feel more like an artist than this airy fairy state of limbo I’m in. I have to get a grip.

Anybody got any experience with applying for funding for a joint English/European project? Point me in the right direction if you can please!