My online exhibition is launched tomorrow by Glitterball Showroom, under the watchful eye of fellow a-n blogger Stuart Mayes 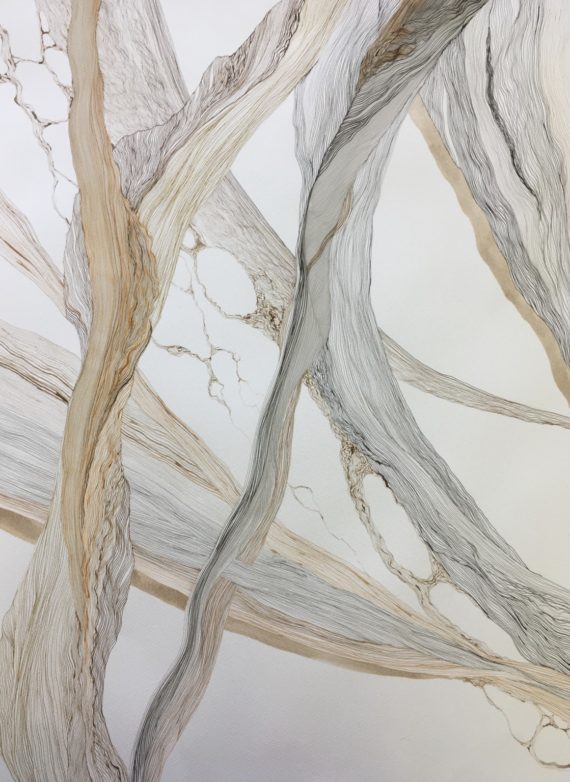 Online exhibition 1-30 April 2021: We are delighted to present Elena Thomas’ online exhibition Drawn In. The show is a selection of works, drawings and sound pieces, from her Drawing Songs project.

Through her careful choice of materials and techniques Elena explores themes of cause and effect, touch, and relationships. The effect that one thing has on another is central to Elena’s practice, this is explored not only in large works on paper and audio compositions but moreover in the fluid exchange of information between these spheres of creativity. The result is a rich and deeply layered body of work that has its own distinct geology.

Elena explains that “[t]he drawings are abstract, the metaphor for my themes lies in the materiality of the drawings, and the performance of their creation. Materials are repelled from each other, and the surface, or combine to form something new. How the ink is either absorbed by the heavy watercolour paper, or slides along the surface of the tracing paper holds the essence of a relationship. The songs provide a narrative of the ideas that occur whilst drawing. The sounds made by the pen nibs, graphite or charcoal are recorded, and manipulated to form rhythms and inspire melodies.”

The exhibition is available at www.glitterball.se and on Glitter Ball’s Instagram account where the show will unfold over the month.

For further information about the show please contact [email protected]

Elena Thomas is an artist living and working in Stourbridge, United Kingdom. She is the recipient of an Arts Council England award for her Drawing Songs project which will premier in autumn 2021. Recent exhibitions include the Royal Birmingham Society of Artists Prize Exhibition for which she was highly commended, Connections at the Daphne Francis Gallery, Birmingham, and Cause and Effect at the General Office Studios and Gallery, Stourbridge. Elena has a Masters in Arts Practice and Education from Birmingham City University.

I’m still reading Living, Thinking, Looking (Siri Hustvedt), in particular the essay The Real Story in which she discusses how fiction, as she writes it, must feel true. It’s not a true story, but elements are gleaned from true life and reimagined.

I contemplate my lyric writing in this context. The ones I like the best are the ones that are the most true. And yet they are not. In some aspects my lyrics are autobiographical. The notebooks I have written them in, the ink and paper scribble ones, are the closest to the truth. They’re also vaguely chronological. Vague in that the chronology lies the fact that at age 55 I remembered what it was like to be 7. The song I wrote about being 7 was through the mind of the 55 year old, not the 7 year old. Also, I might have exchanged daisy for buttercup because it scans better.

In my lyrics I recall conversations with my mother. They are conversations when I was 20 and she was 55. But in the lyric, I write as the 55 year old, with greater understanding, and I wish fervently that she was still alive so that I could revisit those conversations and show more empathy towards her.

I write about close encounters. I have met people just once and imagined how we could be friends for a long long time. I think about people I have known for decades and thought about how they make me feel. I whisk us up, Dorothy style, and place the two of us in a different scenario and play out how we would both react. The lyric story feels real because it is rooted in a real relationship and feeling.

The lyrics are often a mixture of nostalgia, false memory, and wishful thinking.

I’ve started to wonder if I could extend the concept to a short story or novel. I could lift the characters from the songs and resituate them… give them a life longer than three minutes and forty five seconds. I wonder if they are strong enough to survive that?

My mind wanders over these real imagined people and places as I draw. Can I flesh them out? … am I drawing them from the inside out?… can I know how their bodies move? … how their minds work? 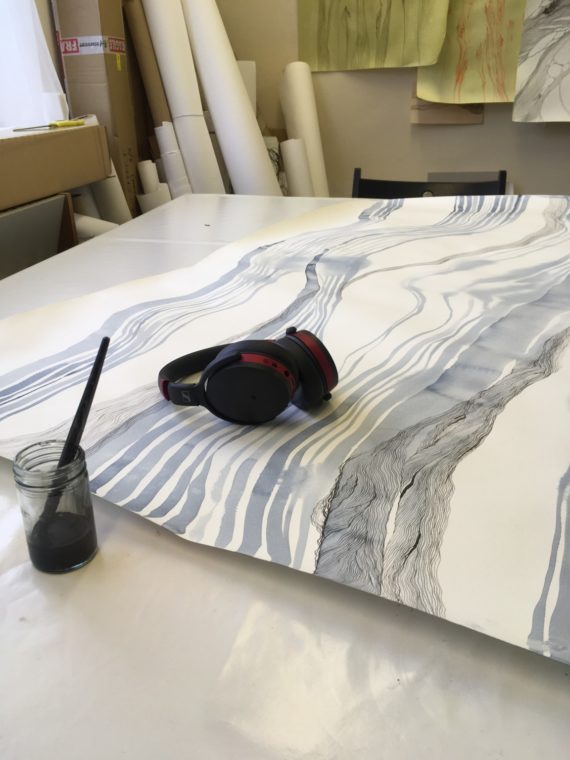 a) There are times when you are working on a “project” (funded or otherwise) when you wonder what the hell you are doing.

b) There are times when you are working on a “project” (funded or otherwise) when you feel you are flying.

I have had plenty of a) since this time last year… with occasional glimpses of the blue sky. But this week I really feel I could, with a prevailing wind, feel it under my wings and take off!

I need to be brave though, or it won’t happen… I could safely go with what I know… or I could reach out to something new and take a leap of faith…

I truly believe though, at the moment, that safe is not an option. Safe is a step backwards. If I’m going to get anywhere I do need to step out, chin up, take a deep breath…

This week I tentatively sent out some music into the world, to a select few folks I trust to be both kind and honest. What came back has blown me away… I am thrilled with the reception these first few pieces of music have had… and it’s given me a huge boost of confidence to make that bigger step. To think bigger, wider, step closer to the edge, start conversations… and to do so with a real sense of belonging here… as a long term sufferer of Imposter Syndrome, this is a great feeling!

Written and produced in collaboration by Elena Thomas and Michael Clarke

It can be hard to judge progress can’t it?

But there is indeed progress.

Every now and then, as well as keeping an eye on the project budget, I also take a look at the original time plan. Now of course, this year, that has had to be flexible. There are things, such as being in a small room with another person for a whole day, that have been impossible… so the plan has had to be nudged. But even allowing for these nudges, things have been done. I’ve been able to tick down the chart. Some of the proposed activity for May have been done, while some of the things for February and March cannot yet. But all in all, a satisfying move forward. Of course, just because I’ve been in the studio doing things, it doesn’t mean that I’m getting anywhere!

I’m not at the top of the hill exactly, but I have found a place at which to stop slogging, turn around and check out the view.

That bundle of sounds and half baked ideas have now started to resemble a body… it might be a flabby amorphous body, but a body nonetheless! I can cast an eye and an ear over what I (we) have produced and can see it’s shape. I can also see a few outliers, which I am happy to let fall by the wayside. I’m grateful to them, they got me here, but now I can see that some of the drawing ideas, and some of the sound ideas, are now surplus to requirements and can be put away (in a safe place, because you never know, right?)

I have a series of drawings ready for a final decision to be dry-mounted… My April exhibition has been put back to July, so I’m not getting them mounted yet, because I might change my mind about which to show… three months is a long time.

I also have three songs within a couple of tweaks of being able to venture out in a small way to a few trusted listeners for a sort of peer review.

I think this is good timing, because then, by the time MC and I can get into the recording studio together, the weather will be better, the days longer, and that body of songs will be a bit leaner… through that process of feedback, review, and parking for a while to then come back with fresh ears.

As part of my Drawing Songs project (funded by Arts Council England), I’d like to set up a Listening Party for interested people to hear and see what I’ve been making so far…

Two questions:
1. Has anyone else done this sort of thing? if so, do you have any hints and tips or cautionary tales about how to go about it?
2. Want to join in?