(Either through readers joining in the debate, or just through the act of writing it down and reading it myself.)

I am faced with a decision between an aesthetic choice or a conceptual choice.

Which way do I go?

I could make “the perfect mend”… make the skirt as respectable as I can, hide its flaws, present something “nice” to the world. I can do this. The gingham is a forgiving fabric, I could make the mend imperceptible unless under very close scrutiny… I have the skill…

It is the flaws that attracted me in the first place… the bad sewing, the torn hem, that great big hole cut out. The way it frays is beautiful. There is a softness and a humanity about it that I love… I see the people that have touched it. I don’t want to mend that away.

How could I present this garment in a way that retains the flaws, shows the loveliness of them… but answers that respectability issue…

Which way do I go?

Hmmm… either the mend has to be secret and perfect, or beautiful and obvious…

There is a gap in my thinking here that needs to be sorted out before I start work.

I know which would look better… but it’s a cop out.

I know which “thinks” better… but it looks rubbish.

I will want to embroider text after the mend… maybe the answer lies in that?

No, that’s not right either, because that feels like cheating. It has to be right all the way through, not just fixed with a few pretty words at the end.

I pulled a bit of blue gingham out of someone else’s ragbag. The great thing about belonging to a group of quilters is that every now and again someone will come to the meeting with black bin bags in the back of their car. Oh the joy! The contents are tipped out, we rummage for two hours, and the majority of the bags’ contents go away to different homes. One woman’s rubbish another’s treasure.

So, the blue gingham, the stuff of schools in summer….

A skirt, home made, possibly in a lesson, by the child that wore it. It’s old, hand stitched badly in places, mended, torn. It is all cotton, not easy wash, non-iron, poly-cotton. It is crumpled, soft – really really soft. The hem has been unpicked to the fraying edge… either by the growing child’s mother, or by the thrifty quilter so as to use every scrap of fabric. The quilter has gouged a great lump out of this skirt, the size of half a dinner plate, a scoop from the hem, round in a lump and back again.

I think this will form part of my Respectable work.

Miraculously, in the bottom of a different bin bag was another piece of the same gingham, less worn, mysteriously cut on the bias. I think I’m going to mend the hole. Then I expect I will embroider something using the squares as a guide. Because of the squares, I pondered using it as part of the pixel work, perhaps taking it apart, but the garment as a whole is so evocative of my own school days it has to stay as it is, and I shall make it respectable again… then no doubt do something to it to make it not so. 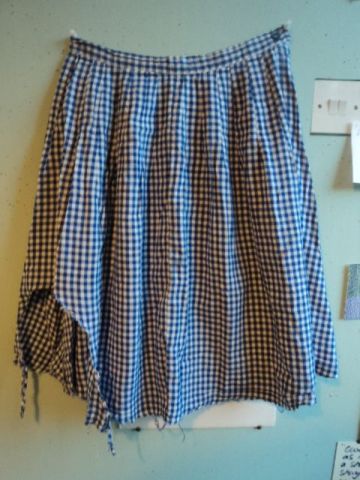 While the pix project and blog are trotting along nicely, there’s other stuff going on too. I am still on the hunt for respectable clothing, having used up my stock of beige blouse, beige twinset, and brown tweed jacket. I’m wondering if I could get sponsorship from Marks and Spencer? Do you think they have a cupboard full of returned and unsellable respectable garments somewhere I could plunder – preferably some that have laid around unnoticed for about 30 years? I would quite like a just below the knee pleated skirt – box pleats preferably. Beige or brown would be nice, to go with the twin set, and in my size. I feel the need to wear these things.

Haha! If only my mother could hear me now! As a child up until the mid 70s I was dressed in “lovely warm autumn colours” and went to school in a brown and gold uniform. I loathe brown, and especially beige, and have not worn either since I’ve had the choice. But I must say, the thought of wearing these clothes with rude words stitched into them, derogatory comments and the like, adds a certain frisson to life! Where would I dare wear them? The twinset you have seen, the blouse I will photograph and post with this. The skirt I haven’t found yet, I think will have quite rude words stitched hidden between the pleats. When I sit down, the pleats fall open and reveal the truth of what I really think about the world.

And then of course there is The Sensible Shoe? Actually, I am a fan of the sensible shoe. I feel a girl should always wear shoes she can run away in, or administer a good hefty kick with… Ah… Rethink quickly then… So perhaps for this what I really need is not a sensible shoe, but a mid-heel court shoe. A non-shoe? Practical, nothing to cause offence. A neutral shoe. A brown leather court shoe. I feel sick already, so it must be the right choice! Maybe I’m looking for a Nice Shoe? Yes. Nice and Respectable.

I suspect I wouldn’t be able to wear these things for long, even with the subversive texts. The beigeness would seep into my bones and suck the life from me.

A while back (post #200 actually) I had a bit of a rant about art and craft. I spent years making all sorts of things, designing all sorts of stuff. It was extremely difficult to come to call myself an artist, the process took a long time, and very early on in this blog, I ranted on a bit about that too. But now I am an artist. I still make stuff of course. And not all of it is art, some of it is just stuff. I have only in the last week or so though, discovered the confidence to confess to my past online! Shocker! I now, unbelievably, feel strong enough in my work as an artist, that the fact I wrote a cross stitch design book in 1996 was able to emerge. It does now look somewhat dated, but I was proud (am still proud) that I did it. But… I wonder if I would have “come out” if my current art work didn’t have some ties to that past? The past has become useful, and I have plundered it, chopped it up, destroyed some of the craft in the name of art.

A piece of work had been abandoned after more than 100 hrs work – probably a conservative estimate. More than half way through the piece, a complicated work of canvas embroidery/collage, I stopped. I made a quilt. I never went back to it. It has been propped against the rafters in the loft – the mouse invasion had a look at it, made their feelings known, and moved on.

A little after this abandonment, I got a new job, did the Artist Teacher Scheme, an MA, and the canvas mouldered on the frame still, in the loft. I hated it, but you don’t discard that amount of work without serious misgivings. In the back of my head was the vague idea I might want to finish it one day. Well…. too late for that now! I have chopped it up into 30 pieces or so. Snip! Just like that. The pictorial nature of it offended me. The chopped up bits of rather beautiful embroidery don’t! In fact I love them so much I’m destroying them further, unpicking, undoing, unweaving. Shredding is happening. I have invented a word: DISEMBROIDERY! What a joy it is… there are bits of unhoovered threads all over the place. I have thrown myself at this in a way that obsession often leads me.

The cause: a conversation. An exchange of images. A new train of thought. New connections.

I’m shredding Mrs Respectable. Take that, Mr Convention! I’m chucking Lady Craft up in the air and seeing where she lands.

There are links between this and the Respectable pieces of course, but it is a different body of work. This is going to be the work I do with Bo Jones, for our joint exhibition later in the year. I’m not going to say much in detail here, as we are doing a joint blog, so you can see the development of the project as it goes along. 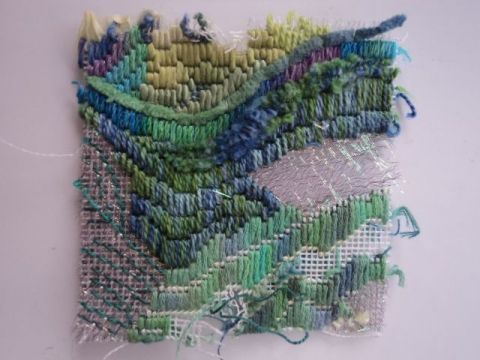 Yes, for those of you that teach or have taught, the Snow Day is worthy of the capitals, and multiple exclamation marks. A gem of sparkle among the routine of the winter days.

So what am I doing with this precious thing? Sat in bed actually, with laptop, sketchbook, a book (discarded in favour of facebook and twitter at the moment though). I mull over the possibilities…. Finish that commission, start quilting the purple and lime green thing, stitch some bits and pieces onto canvas, do some Respectable embroidery, do some ironing (unlikely, lets be honest), Bake some cakes (quite likely), make hearty soup (also quite likely), tidy the studio (no chance), sort and wash some tiddly bits of fabric, and iron them – yes probably.

I just came up with a lovely couple of words while commenting on Sophie Cullinan’s log: Performance Mantra… I think I shall spend the day performing mantra… repetitive actions that lead to meditation and contemplation: sorting bits of fabric into piles of colour, ironing them, arranging them… it is time consuming, absorbing, satisfying in a way that ironing shirts is so NOT!

ps… The images I’m posting are inspired by the altered and pixelated images Bo Jones has been producing.

The purple and green quilt is about 5ft square, the canvas squares about one inch.