The closed boxes….
Whether they belong to Schrödinger or Pandora…

While closed, they hold the possibilities.
While closed, the world is safe.
While closed, everything holds promise of wealth and glory, but can never be achieved.
We stand still, permanently in a state of waiting, watching, and never realising, never growing or knowing or learning anything.

Endeavour is the thing.
It’s no use holding the key unless you use it.
The box, the case, the email, the file, the brown envelope are useless.
They are not things of purpose unless you open them.

There is no point in collecting the trinkets.
What you have to do is open the box, the case, the email, the file, the envelope…
And face the consequences.
Deal with it…. Pause…. Reflect…. Refuel…. And move on…. 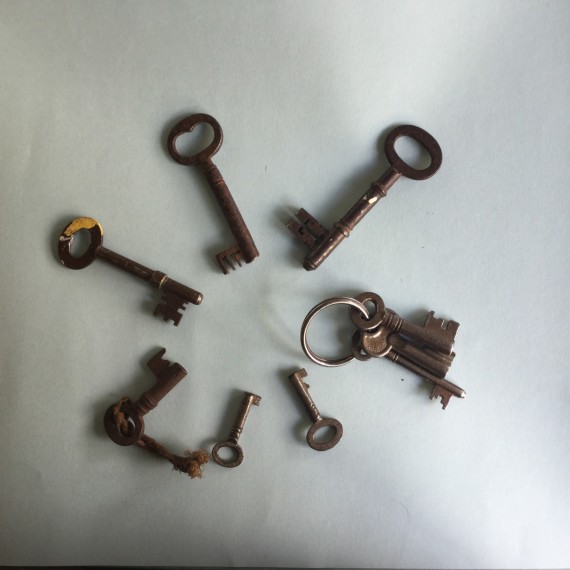 Every one the same, Every one different.

So I return to these little vests.

I worked out a pattern, as I went along. Gradually getting closer to the original, but not quite there yet.

I still don’t know why I am making them, other than for that haptic reward.

I feel I am tickling around the edge of my work at the moment. I am working on the small and attainable because the large scale installation of furniture in my head is impossible without a studio. So I work on the pocket sized.

However, this does have value. I find that other conversations I am having can be interpreted here.

These vests, intended to be all the same, are not. If the original bought item is the norm, my copies are divergent by varying degrees. I’ve knitted using different yarns, and on different needles. I have used different scraps of ribbon according to what is lying about the house. Some have buttons. One has turned into a dress. A couple have keys embroidered. My original intention was to create a perfect pattern and then get other people to help me make loads. But what has happened is I am absolutely fascinated by the small differences that have occurred along the way: I knit while I watch TV so I change stitches a couple of rows too soon or too late. I decrease for arm holes too soon or too late, or by one too many or too few stitches.

I talk about divergence in other fields, with other artists, and end up creating divergence between my fingers. I’m not getting deep and meaningful here. I’m just saying that because I am inherently lazy about the accuracy of my process here, I have created difference. And because I talk about difference, I have drawn a tenuous analogy. I don’t care how tenuous it is. I like it.

My friend Jill sent me a message from Venice, telling me she was heading to Florence today. My heart cried out to be transported there instantly!

Now, I’m a real contemporary art girl. Defo. But….
Florence I think is my favourite city. (Except when people talk about Barcelona, then I swap.)

My first degree, after fannying about for 25 years or so, was finished off with art history courses with the Open University. (Brilliant Institution!)
The focus was predominantly the Renaissance. It was only after doing this that we managed to get ourselves to Florence for about four days. I spent much of the time weeping in shock and awe. Yes. Weeping. At every turn, in every building: half way up the steps to the top of the duomo; at the top looking over the city; every time I saw the Medici cost of arms on the side of a building; at every pattern laid in marble on the floor we walked on…
By the time the four days was up I was almost craving a white cube. Over stimulated, over emotional, over excited. After all the reading, the study, the essays, the photos…. Suddenly I could see the people. I could see the hands of the people that made it. Shock and awe.

Have a great time Jill. I envy you. When I get my bionic knee I’m going to go back and climb those stairs again.

A song can elicit a much more immediate emotional response than a piece of visual art. I’ve said before that as an artist performing a live song, that immediate response, even if a polite ripple of scattered applause is a heady thing, compared to the slow burn response that has only happened after much thought, perhaps discussion, and even going away and coming back that happens after viewing one of my installations. No applause there.
Both responses are gratifying.

I had a conversation with someone about the army greatcoat I embroidered… We talked about her grandfather, she talked about him being far from home and how he never came back, and how he was missed, the effect he had had on his family… She wept openly, and I joined in.

I was told off by a ten year old. The children’s clothes I had embroidered with hand marks were viewed as jolly representations of other children by her classmates. On the way out of the room she frowned at me and said “I don’t think these are happy children AT ALL!” and stomped out.

On the same installation someone picked out a piece of work that had never been remarked upon by anyone else. It was the piece that did not have a hand mark, but a series of stitched concentric circles, as targets for prodding. As she spoke, she held her hands against the top of her chest, protecting herself from further prods.

The bra that I made with bandages on was a quiet item, and hung among the others. I always let viewers handle my work. This piece was lifted, and stroked, let down, stilled, then walked away from. A crumpled tissue came out from a pocket, a tear was wiped. A deep breath was taken. Life carried on as normal.

These emotional responses are rare, and I feel extraordinarily privileged to have prompted them, witnessed them, and be involved in them. These are the things that make me carry on. Most of the time I do the work for myself, and I never see this.

A song is a different thing. Music is magical. Before the first word is sung, a mood is set. The right feel is crucial. Sometimes it is good to have an uptempo piece of music to a miserable lyric, and vice versa, it is a counterpoint, it draws attention to, it slows down that initial response and compels the listener to take more care with the listening. But the right piece of music to the right lyric adds more than I can explain. A chord change in the right place can add poignancy. A space, a silence, holds a breath… A driving rhythm takes you right where you need to go. This is what elicits the immediacy of the response. The lifting up, the resolution, or not, is what the applause is for… Thank you for getting us there, thank you for asking the question and giving us an answer, or not. Thank you for holding back the punchline. Thank you for seeing the world in a different way.

Being able to make things, write words, and add music to an installation is powerful. Performing a song I have written is a whole soul activity. It takes some getting used to. It exposes everything. It takes huge courage. But the rewards, when you get it right, are immeasurable.

I have previously talked about avoiding tautology, and worried that by writing a song, I am just repeating myself. But, I think differently now. It isn’t a tautology, it is a torch.