Of course, as soon as I say “it’s hard to look forward at the moment”, something happens to make me leap forward!

Working at home when you are used to working in a studio is tricky. I have struggled to find alone time/space with two other adults in the house. But usually, as long as I remember to Make an Announcement they leave me alone, mostly.

Singing time is worse than drawing/making, as it intrudes more… so I haven’t really done any. My voice feels rusty when I try.

It’s happened before, this feeling, and it’s a good feeling. I’ve been drawing drawing drawing. The forms and lines are slowly morphing, that’s good, because I can get stuck on rails sometimes and feel that I’m repeating, but getting nowhere. The gentle morphing is good. I’ve been working in a larger sketchbook, A3, rather than my handbaggable A5. So I’ve been using left over paint on “future pages” and drawing over it when I get there… I look back through these sketchbooks (I’m on the third) and there’s a backwards stepping and a gentle moving forwards, and a backwards stepping again. It’s actually quite rhythmic.

I ordered some imperial size sheets of heavier watercolour paper (425gsm Bockingford, for those paper geeks among you, instead of my usual 10m roll of 300gsm). These are easier to handle at home. And as often happens, a change in materials, however slight, does make for a change in the work. I have found I am making works in series. It almost feels like a series of life drawings of the same model, in the same pose, from different angles. Once I realised this I wanted to do something that drew them together somehow, back-building the model from the drawings I’d made. So just yesterday I started drawing with wire. My first efforts have been in garden wire, because, thanks to lockdown, that’s what I’ve got. What these first 3D sketches have done, is they have enabled me to figure out the vocabulary, and a structure.

I hung the wire in front of the drawings, similar forms, pulled out from the flat wall. The sunlight hit them, the shadows fell.

Suddenly I was able to see it all in a gallery space… these drawings on paper, and in wire, connected from one place to another…

So now all I have to do is the work.

It’s hard to look forward at the moment.

The things we used to do, if we are still able to do them at Christmas, will be done in a very different way. Impossible to predict which things we will return to, and which will be lost forever.

So. Deep breath… I’m looking back. But hopefully in a way that enables movement forward later on.

Today we start to clear out the shed in readiness for demolition. It’ll be more of a gentle push and a crumble than a big bang. But its still a momentous occasion.

Elevenish years ago… or maybe 12… I was taking part in the Artist Teacher Scheme. I had spent a couple of years trying to work out if I was really an artist, and if so, what sort. I was working with fabric and patchwork and stitches, and going through some sort of angst about the domestic and the feminine and real art. You know. Proper Art. Not fannying about with bits of old curtain like some depraved Maria Von Trapp. I was sat in the garden, pondering. The difference between fabric that got stretched and painted on, and fabric that got stitched. Decorative, domestic, useful, feminine, masculine. As I stared into the middle distance, my eyes rested on the garden shed. That traditional exterior, masculine space, full of masculine things like sharp tools and machinery. I hatched a plan, over a week or so, and then, while my husband was at a football match, I covered it in floral furnishing fabric. He thought I’d lost my mind. Whereas, I’d actually found it. 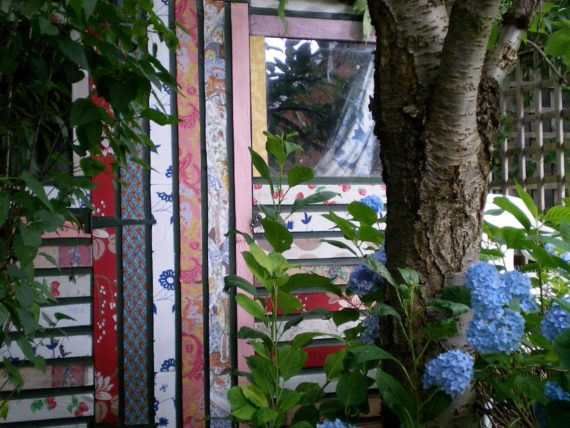 I spent the next few months covering other people’s sheds, in tucked away corners, and on allotments on the top of a hill. These small and useful buildings were becoming domestic, and feminine. At the time, they did cause a bit of a hoo-har, and a bemused local newspaper reporter turned up on the allotments to see what was going on.

In another part of the world, in a different story, a wonderful singer songwriter (Dan Whitehouse) had the thought about these sheds being perfect for the backdrop to a video… wind forward a year and we had designed, built, decorated a flat pack shed for transporting as a mobile performance space. This shed featured in a book, we had a channel four production company in the garden, filming a bit of a pilot for what eventually turned out to be George Clarke’s Amazing Spaces (in the real show, it had a fleeting three second appearance!) It featured in a book review in The Sun. Dizzy heights! The LOAF mini arts festival was born, and a raft of wonderful performers have played in it, and have since become my friends.

The success of the mobile shed gave me the confidence to apply to BCU to do my MA…. Blah blah blah…

The point of this reminiscence is, as I pull down the very first experimental shed, is that you never know which moments are pivotal moments until you look back. In doing this, it helps you move forward, trusting that process, because if you don’t just bloody do it, you’ll never know. 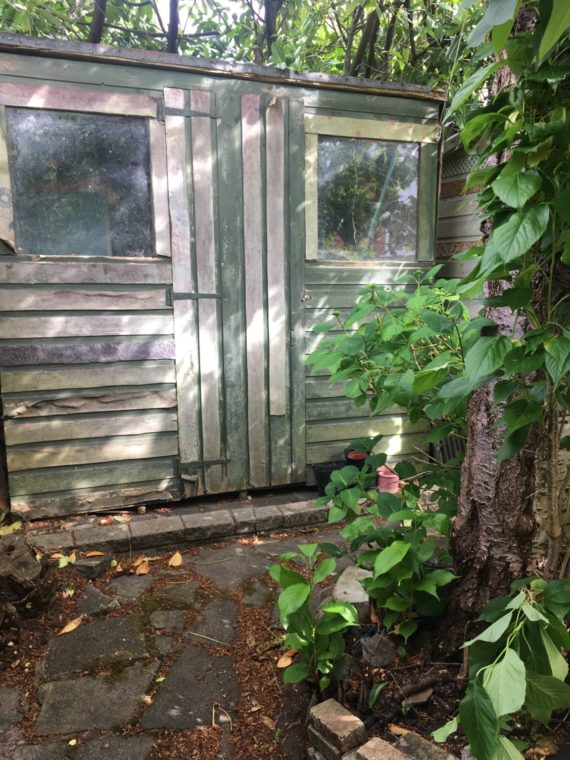 The way I am working now is very similar to how I was working a couple of years ago… circumstances have led me now, as then, back to the confines of a sketchbook – mostly.

Puddles of paint – watercolour. This time, not blown across the paper, but directed, with a brush. Less accidental, more deliberate. Or a complete wash. Or after the drawing, in the negative spaces. I don’t know which will be the way I end up exploring more, but at the moment it’s all in the mix.