I have listened back to my own podcast a couple of times now. Enough to know that some of the questions, in hindsight, I didn’t give enough though or consideration to.

The big one that is bugging me, is the avoidance of the question about research and my flippant answer “Oh I don’t do any of that!” Sarah pushed at it a little bit. But I still didn’t answer it properly. So I’ve been giving some thought as to why.

I think it comes down to what I think of as Proper Research. My MA research was crowbarred into the realm of (mainly) French philosophy. I found it very difficult to relate to any of it. Then the things that I did find valuable and interesting I was told would not cut the mustard academically. If I did another MA I might question that now a little more vehemently (unlikely!)

Actually, I do do a lot of research. So there. It’s just that I’m not used to labelling it as such, because I have been told that it isn’t the right sort of research… so I have believed this and been instrumental in my own invalidation.

I attended a talk/panel thing at the Art Party Conference in Scarborough in 2013. The one part of this that struck me as an artist rather than a teacher, was the point at which Pavel Bulcher said that aligning his work to any philosophy wasn’t his problem, but up to the academics. He wasn’t interested. His job was to make the work.

So MY job is also to make the work. My research, whatever form it takes, serves that purpose only, to feed the work. The nutrients that I decide my work needs is entirely up to me. It’s got sod all to do with Derrida or Deleuze or Baudrillard. If you want to look at that you go ahead. Not my problem. (Although I am partial to a spot of ancient Aristotle)

So here, as a chance to redress the balance, I shall make a list. This is my research. This is for my own benefit, to remind me that it is proper research. If I am doing it and it is interesting and useful and has an effect on my work, then of course it is proper research, and I don’t need the crow bar. I’m no longer being assessed in a university context and I am still developing the confidence to stand up for myself and my practice.

I investigate the materials. Their physical properties and how they work in combination. I look at them also metaphorically, as people, as a family that rub against each other. I look at my own emotional responses (and later at the responses of my viewers).

I have a methodology that includes rules, and a vaguely scientific root.

I am playful in my approach too.

I look at other images from a variety of sources that are NOT other artists. I look at microscopic images of fungi, bacteria, viruses, cells: plant, mineral, animal. I look at imaging from the Wellcome Collection, I look at old photographs… my family and strangers’. I look at clothes and faces. I look at my own past practices. My research is in real life, real body, real mind. It is an up close and personal enquiry.

In some ways, I think when I look at the work of other artists I see that as a secondary source. Someone has already looked and responded. What I want is a primary source. The raw material… truer, purer?

Audience watching is also research. Feedback either from a gallery, exhibition experience or the performance angle is absorbed and feeds into the next. Talking to the women in the audience, and fellow female performers, after a gig is becoming a habit. I want to find out about their motivations and misgivings. Why are they there, or the absentees… why aren’t they there?

With feedback comes a re-assessment, and hopefully change, improvement, a different approach perhaps… then the circle loops round again.

Being ‘present’ in the performance is a skill. To be aware takes rehearsal and confidence. It is hard to be present if you are worried about the performance too much, or the equipment, or forgetting the words of the second verse (I am too scared, I have an iPad clamped to my mic stand just in case, but I’m getting better).

The artists I do look at closely are those around me. My interviewer Sarah Goudie is tremendously inspiring and questions me on a healthily regular basis. As does Bo Jones. I send work out over social media to be viewed and commented upon. The artists surrounding me are kindly supportive, but also critical commenters: Debra Eck, Kate Murdoch, Ruth Geldard. My studio neighbour Louise Blakeway. These people are of more value to me than the prize winners and the blockbusters.

The songwriters I can talk to about the nitty gritty of the art/craft are instrumental (pun intended) in developing my skills, most often my Band mates Andy Jenkins, Ian Sutherland, Lloyd McKenzie, John Kirkman. Dan Whitehouse quite frankly changed the landscape of my practice over the last decade since I met him; Michael Clarke and his willingness to play, get it wrong, and find some magic; Nicki Kelly’s ability to throw herself at the world… regardless of fear.

I have conversations with Laura Rhodes that inspire deep thought about art and the world (she is a young woman I have seen grow from a babe in arms to a gloriously talented photographer); My two sons too… proud mother I am…

And there are people I would like to share a table and a beverage with, that I have seen and heard from afar, who have shown me what can be done. My current musical crushes whose words I read like poems and prayers being John Elliot and Kathryn Williams… I binge-listen, hoping some of it will rub off.

Isn’t that what research is?

Ok, so I’ve never been very patient. I was going to post this next week, but it’s ready now so I might as well post it, right?

As part of my Cause and Effect exhibition, I did an interview with Sarah Goudie, and this is it… Part one…

Thanks to Nicki Kelly at Effing and Blinding Productions for the editing and production.

I’m not easily impressed, me.

In fact I am rather cynical. Suspicious of motives sometimes.

So here is a tale to restore the faith.

Arts Council England gets much criticism. Some of it is undoubtedly justified. The application process is tough. Grantium as a piece of software is a nightmare for most people, impossible for some. However, their one-to-one on the phone service is marvellous. They have wonderful people working for them. I hope these people are well paid and happy.

As well as being cynical and suspicious, I am also rather determined and bloody-minded. My thoughts have always been that ACE have money to distribute. They HAVE to distribute it. So some of it might as well be to me. And indeed, some of it already has over the last few years. So I have been rather dogged in my attempts.

This is a tale of determination on my part, and of openness and helpfulness from ACE.

In April 2018 I made a submission which was rejected. As is natural I was very upset about it, but after stomping about a bit, upon re-reading I realised they were right. It was far too complicated and unclear.

It took me a while to get my head in the right place, due to all sorts of art and non-art reasons. A year later I submitted a leaner meaner project which was also rejected, but this time the feedback was rather more positive. They commented on the bits they liked, and told me that although it was considered fundable, there were areas of my application that were weaker than others they were considering at the same time. Fair enough. They only fund 40% of applications, so I’m fine with that. I was encouraged by the positive, addressed the negative areas and resubmitted in June.

This time it was rejected, but with feedback saying I had not met the criteria. WTF??? At this very moment I was in the middle of hanging my work for Cause and Effect, so decided I didn’t have the headspace to complain, or ask for an explanation, but made a note to get back to it as soon as the exhibition was over.

I didn’t have to wait though… three days later I had an email from Keir Gill who is Senior Manager of Compliance and Improvement saying it had come to his notice that I had received conflicting feedback for my application. I was absolutely gobsmacked that someone had noticed, and got in touch so quickly! He was unreservedly apologetic, and extremely kind and understanding of my frustration. We had a short exchange of emails with a few questions from me, but basically arranged to have a telephone conversation after my exhibition, to go through things.

In this initial phone call, which lasted about 45 minutes, he assured me that my second application DID meet the assessment criteria, and that it was indeed fundable… and if I wanted to resubmit he would be very glad to go through my form with me to give me the best possible chance of success (being very careful to say this was not guaranteed). Well I would be stupid to say no to that wouldn’t I?

What he also offered was an opportunity to send a draft for him to check before I submitted. Again, I’d be daft to say no!

So at the moment, I have submitted it again. With all the suggestions followed, and edits made. I have learned loads about their process in the doing of this, and whether I get this project funded or not, it won’t take that away, it’s been a valuable experience.

I wanted to blog about this before the result, because I feel it was important to acknowledge the efforts, without being overly influenced by the result.

I have been extremely impressed by Keir and his good-natured responses to my questions, and his super helpful attitude. Throughout the whole conversation it was clear that he sees these projects as important. That fairness and clarity and transparency are of the utmost importance.

And so, for those extra cynical people like me, who doubt things, be reassured that ACE are doing a good job.

And if you have a project in your head, apply for funding, ring them up, ask for advice, they’re lovely. If it gets rejected, read the feedback carefully and try again. You never know, you could be in the 40% that gets a yes. But you won’t if you don’t try.

The air feels thick as I walk through it.

I watch my hands draw. I watch my pencil binding those ever tighter lines, constricting and strangling the alien paint clouds.

I feel like something is trying to catch up with me and I can’t run away. 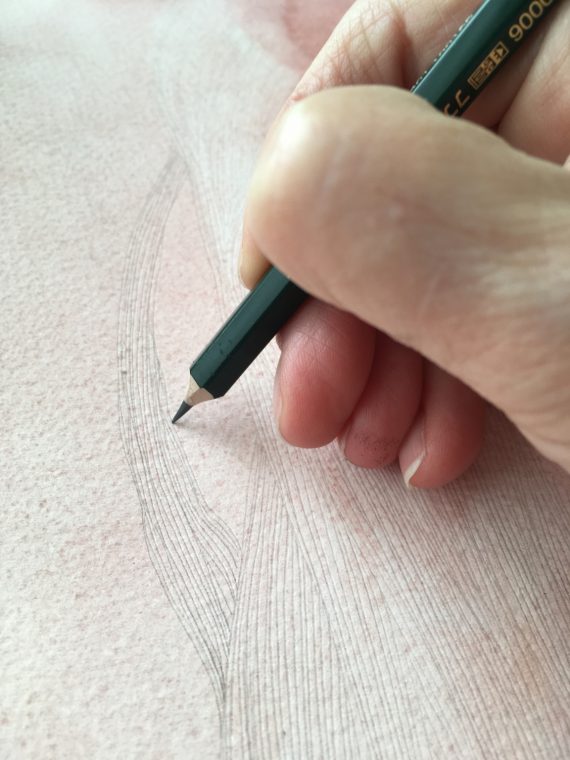 But there’s also a sense of shrouded optimism… if I can just get through this bit, just hang on a bit longer… it’ll be ok