Some days the drawing just doesn’t get drawn.

After the exhibition I thought I knew what I was going to do for a while, but this morning it just isn’t happening. My eyes feel weird. I think it’s something to do with my new(ish) varifolcals… but I can’t be sure. Maybe it’s just my head… and I’m quite tired.

I was itching to get into the studio this morning but there’s something just a bit off-kilter.

This happens doesn’t it?

I ask this to seek reassurance I suppose. I’m always going on about the natural ebb and flow, I’m very reassuring talking to other artists. It’s a natural thing… blah blah blah…

I’ve put some more paint over the paper. That’s made it worse. Maybe I’ll try to wash it all off? Maybe I’ll leave it till tomorrow.

There are all sorts of other things happening in my little shrinking world, and I am sure they are having an effect. I had thought they would have an effect on the drawing, as that’s the thing I’m always going on about… but this just feels weird… displaced… a bit… awry… almost out-of-body…

Anyway. I’m going to take off my glasses and lean back listening to The Unbelievable Truth until Ian arrives for a rehearsal. A bit of singing might set me straight…

It did. It always does.

I’ve not been into the studio since really… other than popping in to fetch things and chat to Sarah. Had a day with my friend Jill yesterday, always restorative. Then a day with my husband today. We often have to remember to do that, so we put it on the calendar! Otherwise I’d squirrel myself away in the studio and forget the rest of my life. Not good.

I shall have a little bit of studio time tomorrow, and a bit on Saturday, but then probably won’t be in there until late next week. I’m hoping when I get there, the awful work spread out on the table will either look better for my absence, or it will become obvious what I have to do with it.

I am aware that I’m not posting as frequently. This is because there are many things occurring either in my home life that I won’t be blogging about, or in my art life that I can’t blog about just yet. There’s a doozy of a tale waiting to be told, it just needs to unfold just a little more before I can!

In the meantime, do check out the music part of my life: 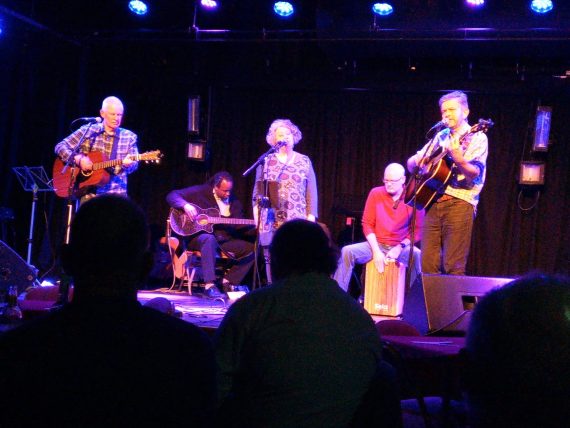