The wonderful thing about blogging is it lays out a platform for prediction, then lets you see everything in glorious hindsight later on.

I’m finding it hard to believe the things I believed. Because now I believe something else.

When I was doing ‘Nine Women’ in 2015, I was reticent, cautious, scared about performing. I believed it didn’t fit. I liked the music with the installation but could not see it as part of my practice. In fact I remember saying that it definitely wasn’t part of my practice. I had to be persuaded to do a few songs live at the PV, just as I had to be persuaded to perform a song for my MA final assessment three years earlier.  I now find it hard to understand why I thought it wasn’t the thing to do… even taking into account the sweaty palms and shaky knees thing. Intellectually I couldn’t see a way through. Though why intellectually should have a say in it I don’t know. I then went through a period of saying “fuck it!” and doing it anyway… “life’s too short!” etc.

I’m not quite sure when the worm turned… it must have been a gradual thing.

My solo exhibition opens on August 6th, and the PV is on the 9th. (Do come, lovely reader, it will be wonderful to meet you!) My band The Sitting Room will be performing a short set in the middle of the evening (see flyer below for details). It is as I look at the songs in our repertoire, all lyrics written by me, with edits and input by my musical co-writers Andy Jenkins and Ian Sutherland, and arrangements beautifully rounded by Lloyd McKenzie and John Kirkman, that the truth cements itself into my brain. The intellectual has caught up with the instinctive. I have stopped making excuses for myself, and I now accept.  I trusted the process, and I trusted myself to bring it all together. No one else could have written these lyrics. They are irrefutably a big part of my practice. The way I write them, prompted by conversation overheard and participated in. Prompted by interactions recent: sharp, and ancient: dulled by time. I talk of childhood, love, loss, and that bloke I met in the pub. I talk about these people in song, just as much as I carve them into my paper with a 6H pencil. The fact that I perform with my bandmates adds another layer of meaning for me. They are songs, yes, and I’m really proud of them. I love that the guys are serious about making them really good too. But the songs are, to me, another way of drawing. These drawings lodge themselves into the heads of the audience. I know, because I’ve heard other women singing the chorus in the loo half an hour later. If my work is about Cause and Effect. If I am talking about how one person influences another, leaves a trace on them… then how much more part of my practice could this be?

I am really looking forward to this performance. It feels important because it is in the gallery. I’m setting out the stall.

I no longer have even a small vestige of doubt here. If anyone else does, that’s their problem. But let me finish the set, then I’ll get a drink and we can talk about it.

A few posts back I talked about the upcoming show with Bo Jones. Due to unforeseen circumstances this is now going to be a solo show for me. Don’t worry, we haven’t fallen out! The work with Bo will pop up again later, but as we worked towards this booked date, we realised the timing wasn’t going to work. As I said in that previous post about collaborating, sometimes you don’t know things until you start…

Faced with the large gallery space, and only my work to fill it, I change tack and start to look at my work on its own, and not as a response or prompt or in juxtaposition to something else. (yes, I used the ‘J’ word… sorry).

It has been an interesting exercise. Because the work in itself is about the relationships, between people, their circumstance, and the way the materials react to each other as a loose metaphor. But it is ok. I can do this on my own. The speed of the change as deadline approaches has forced me to look more closely. No bad thing. I now hold the responsibility alone. This work is very different in a lot of ways since the last time I shared a gallery space with Bo, so maybe it makes sense in the long run for it to stand independently and establish an identity of its own?

The title, now I have thought of one, suddenly seems obvious… right and fitting. 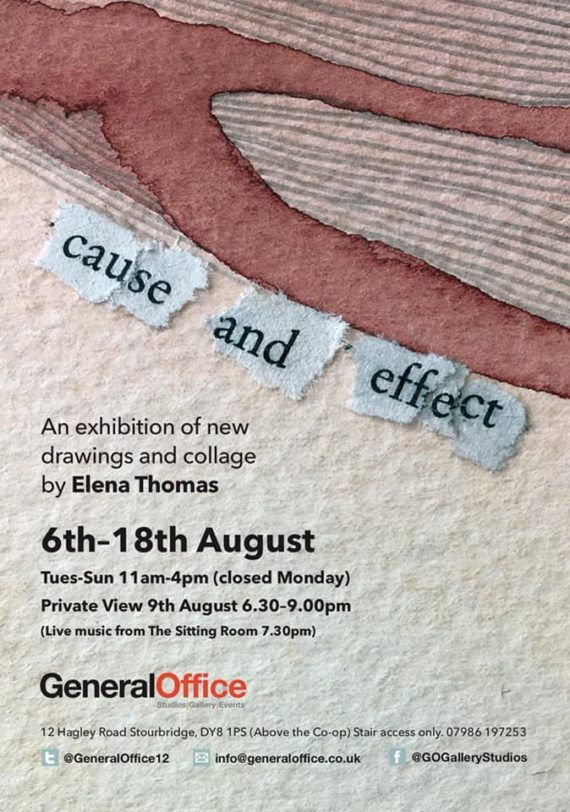 In these busy pre-exhibition weeks I have to remind myself that time away from the studio is still time well spent.

I find myself harking back to the time when it actually dawned on me like a really obvious truth… like the four tree trunks that turn out to not be trees but the four legs of a huge monster… my view shifted and I realised that all of the aspects of my life were my practice. I didn’t need to squeeze everything onto the dining table in two hours on a Sunday afternoon. All parts are my practice. I realised this morning I am focussed only on drawing. But actually I could do with stepping out of the studio for the big beast view on life for a while. A deep breath.

I apologise if what I say here becomes a bit unintelligible, but I’m trying to reacquaint myself with the concept. A reminder of who I am.

My practice grows outwards from who I am and so therefore everything around me feeds that, and needs attention.

The factors that made me who I am, in this moment, are directly responsible for my work. These 58 years have fed the work. All of it. Not just the art bits, but the rest of the childhood that wasn’t spent drawing. The woods, the grasses, the fields… the spotty teenager angst… the jobs, college and university, the training, the money and the lack of it. Relationships with my family, friends, boyfriends, then husband, children, home. The teaching I have delivered and received, teachers and students loved and hated. My grey hair and my shape, my politics, my love of cake alongside my giving up of gluten and sugar, my arthritis, and the health of my loved ones. All of this is in my drawing. Love, loss, pain and joy.

So I have dragged myself away from a drawing that threatens to suck me in for six hours at a stretch (luxury!)… I look at the green of the July garden, in spectacular full bloom and the slightly overcast sky, and I prepare myself for a Sunday afternoon gig. The anticipation is a thing of joy. I sing my words with my musician friends. The words that came from this life. I have a trepidation about it being a new venue, but it is exciting as well as scary. That fear and excitement is in the drawing too.

I step away from the studio, close the window against forecast rain, unplug everything, lock the door, and drive away.

I move away to feed my soul, ready to give more of it to the paper tomorrow.

Following up from my post on 14th June about worthiness…

I now have the big roll of paper, and I’ve started working with it. A strange thing happened…. as I was drawing there was a thought that followed a line of grey watercolour paint… I felt the need to hide some text along it. On this scale, the text does feel hidden.

Suddenly the small collages with text find their place. They made themselves useful and came up trumps. These stolen words become a focus for the work. A way of seeing what’s really there, or what is possibly there, among the obsessively drawn lines and the clouds of watercolour.

People do ask me occasionally about collaborations, as I’ve done a few. Some successful, some not. And I can’t really, even after all this, tell you how to spot a potentially good one, because you don’t know until you actually do it. All I can say is that if you have a bad one, don’t assume that collaboration is not for you. You just haven’t found the right one, or the right way for you to do it… and every time it is different.

I have an upcoming joint show with Bo Jones. For those who haven’t followed this blog religiously, Bo is a fellow artist teacher who I met while doing my MA at Margaret Street, almost ten years ago. We were the only two on the arts and education bit of the course who were there the whole time, so we became initially course companions, and very gradually friends. The friendship, as Bo tells the tale, sealed by me telling him to fuck off. Hilarity ensued!

When the course finished, we were feeling completely bereaved by the loss of it, so made a pact to book a gallery, a year on, and whatever we were doing, fill it with work. That year saw the establishment of a deeper understanding of what it meant for both of us to be artists away from the structure of the academic. We learned a lot. Much like driving after you’ve passed your test. But having a co-pilot in those early days, I now see as a formative, extremely valuable experience. We had a long-distance collaboration for that show, and ever since. It is loose, casual, kind and supportive, but also critical. Having got into the habit of examining and thinking about the other artist’s work, that continues to this day. For the most part it is slow. For the most part it is me sending work to Bo saying “Look! Look! Look!” And Bo tutting and sighing. He is relentless, setting himself year-long projects to post on social media, that I couldn’t begin to embark upon. I once started a month long drawing thing and got to about 12 before just forgetting and couldn’t  be bothered!

So the slowness and long-distance nature of this conversation is useful, allows thinking time. It does have an unreal, unrushed, natural feel to it.

However… we now have a show coming up in August and slow and unrushed is no longer appropriate. We have decisions to be made and stuff to do. So yesterday we had a rare and treasured day together in real-time, real-life, our reality augmented. I had an agenda in a note book. This apparently is hilarious. But we got it done. We looked at work, looked at how to hang it, looked at the gallery, discussed printing needs, designed flyers and wrote blurb… all no doubt to be tweaked at the last minute. We drank tea and coffee, had a bit of a moan about the teaching world that I have left behind, and Bo is still embroiled in. It was a busy day, but still had an easiness about it. The thing about the roles is governed by our situations. It’s in my studio/gallery space, so much of the practical stuff will be for me to do, but also because I’m not teaching, I have the time to do it. Bo has a way of saying things, a way of writing that is possibly more direct than mine. He has a way of cutting through crap, that I can struggle with sometimes. We get there.

This exhibition is a snapshot of a continuing collaboration/conversation about our work, our converging and diverging themes, how they touch, despite the differences in our materials and methods. I think this will make for a vibrant show and I’m excited by the prospect…