The first line of text on the home page of my website reads:

“People have an effect on each other.”

For the last ten years or moreI’ve been working around this theme in one way or another. Making work and writing about children and parents; care, neglect and abuse; the complexities of adult relationships and friendships; women with women – mothers, sisters, daughters.

Most recently I have returned to drawing, in abstraction. I do this as a way to dig a little deeper than the textiles were allowing. Somehow, the concentration required for the abstract was allowing me to experience the materials, allowing me to let go (in some regard) of how something looked and let in the feeling… to experience the phenomena of one material against another. Effect. Graphite on pigment against pigment making lines and the texture of water on paper…

I feel in some ways that textiles had become stale through familiarity and a level of expertise. We had been married for a long time and I was taking the stitch for granted. It no longer seemed to have the power to surprise me…

The drawing I am doing now, not observational, although influenced by half a century (maybe more?) of observation, is closer. It is more attentive, more sensual, more considerate of material subtleties. It surprises and delights me all the time.

Just when I think I am getting somewhere…

Because now we are wary of every thing we touch, every person we touch… and beyond that… who touched that thing before we did?

Who or what did they touch before that?

We are touching each other less. The touches that are made are fraught with peril. Yet they are simultaneously more precious.

I sharpened my 6H pencil and dragged the point across the soft surface of the still slightly damp watercolour paper. The point shattered and a shard of hard graphite flicked across the table. The jag had pierced the line I was drawing. I had wounded the paper with it. The paper, no longer smooth, had a small but significant push in it, midline. This will effect the next line I draw… unless I move further away…

The studio has, temporarily, moved back home. 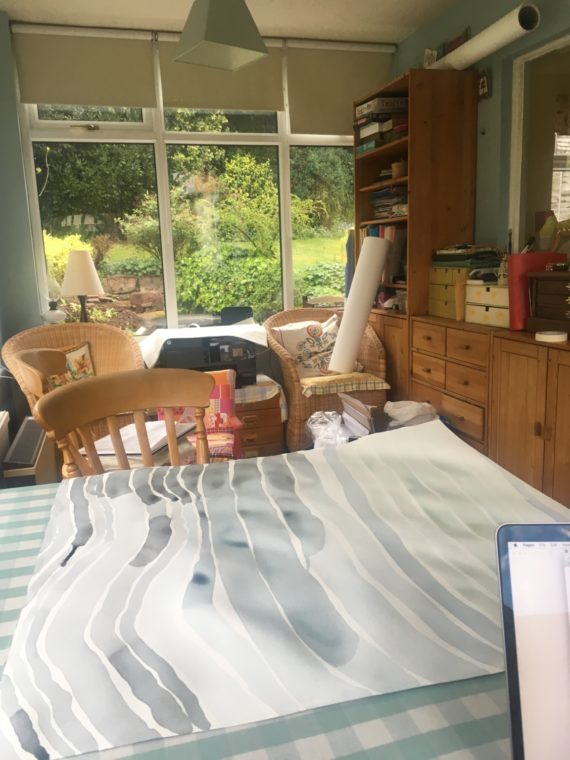 Of course I have all the wrong things. I’m making do as I’m sure most people are. Restrictions to space, materials, equipment can prove interesting and provide little informative detours in the work. But as I have experienced, sometimes a detour isn’t a detour, it’s the main road.

For the last couple of weeks… or is it three? Four? I’ve been in my armchair and in my sketchbook. This has echoes from a couple of years ago, when I was previously without a studio, for different reasons obviously, and resorting to the sketchbook. Small work, limited choices. Decisions are hard to make in difficult times. Ironically, then, my husband was very ill, but now he’s very well. The treatment makes him vulnerable, but he is well. Thank goodness!

So back into the sketchbook I headed. With watercolour and pencils. I had a new large sketchbook for my birthday, and the paper was a very different, linen-like texture, so the drawing changed to take account. I had also started using up the last dregs of watercolour in a palette, just painting stripes. This became hypnotic, so I started doing it on purpose. Sort of. But like before, I was contained. This is comforting, and needed, but after a while it becomes a bit stultifying.

However, I do recognise that my last period of armchair and sketchbook imprisonment (of my own making) resulted in a change of tack and a new body of work…. Eventually!!

This morning, over breakfast, I realised that with everyone at home, I wasn’t working on anything. Hadn’t wanted to work on anything particularly. I was – in terms of art work – stagnating. I had got loads of housework done though. So having decided I needed to work, I needed to get out my big paper and breathe a bit. Initially frustrated by lack of the usual equipment, I needed to reluctantly recruit another pair of hands to wrestle the big roll of paper into submission.

I had no idea what to do, but knew that I didn’t want to put the paint on in the same way that I’d been doing in the studio. Don’t ask me why because I don’t know.

So… a big fat brush and my favourite Payne’s grey… stroked down the paper. And again. And again. Weird. I had been painting wobbly stripes in my sketch book for months, without it ever occurring to me to go large with it!

I’m going with it. I know I will draw over it. But what and how isn’t clear yet… but the paint isn’t yet dry so it’s ok.

There will also be text. Torn. Rescued or stolen from other peoples writing. That’s the thing about words. They belong to everyone, can say anything. Words that have been used to hurt can also be used to soothe. Recycle them and use them kindly. 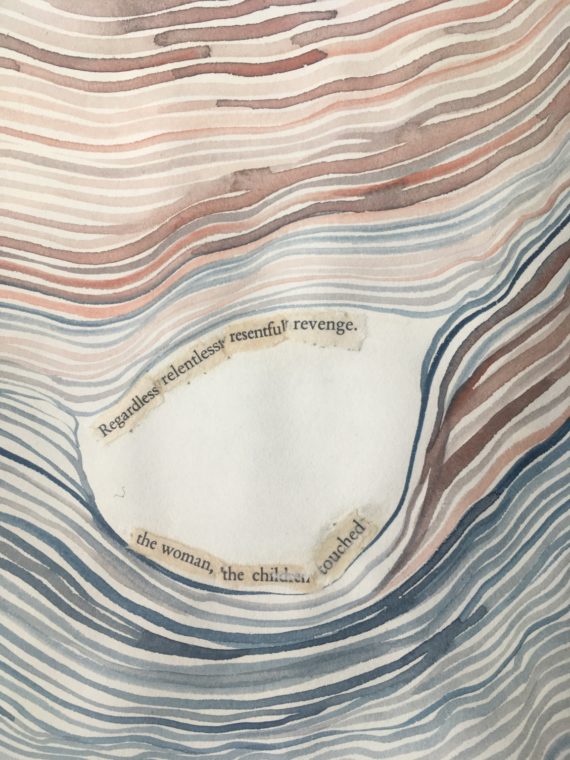 I find I am revisiting the drawings, writing and words spoken in the making of Cause and Effect last year, and finding them prophetic here and there. Can hindsight be prophetic? I can tangle myself in words if I’m not careful.

(A memory comes to mind, of my father, saying in deep and slightly broken English “I thought I was wrong once, but I was mistaken”)

We are seeing unfolding before us dramatically, a tangled unseen web of connection, of Cause and Effect. I watch with a morbid fascination. How do some people know how and where they caught this terrible virus? How does it pass through some people unseen and unfelt, then move on to others who then die? How terrible a thing to know the effect you have had, just by being in the same place, touching the same surface.

My work over the last ten years or more has been about the glancing blow, the whisper, the deep effect had by a word, the slightest touch.

So I am looking at the photos and words in previous posts, and wondering how the present might effect changes on future work.

I have written a response in lyrics, already put to music via email, wetransfer, zoom, GarageBand, using phones and laptops and dictaphones… isolated, but not.

I’m wondering also how drawing can also be changed, communal, interactive and collaborative, when the paper and the space isn’t shared…

I pay the rent on my studio, wondering if I will want to use it in the same way when I get back in to it…

Here we are a couple of weeks later…

I can’t seem to think straight.

Yesterday I seemed to spend much of the day nearly crying.

We had spent our isolated days in a little bubble of relative idyll, but now we are feeling the crisis breathing down our necks. We now know of people who have died from this terrible virus. And we know people who are very poorly with it, but that we are sure are going to get better. As sure as we can be. More hope than sure I suppose. But the threat is real and is there.

Our household is weird. We have someone at “medium risk”, and we have someone who is required to work on a school rota to be with the children of key workers, through what would have been a holiday. So we clean, and we wash clothes and we sit apart. When someone died we hesitated, and then we hugged anyway.

I’m getting much support for my morale from my neighbours in the WhatsApp group, my facebook group The Drawbridge (if you want to join, seek it out and ask).

But mostly from a group of friends who just pop up in my inbox, or texts on my phone, we talk as we always have, and then we talk of things we never have.

I know we are all tackling this in our own way. The physical is one thing, but I fear the mental toll in years to come. This isn’t just going to go away come Christmas is it?

There are so many people I just want to pull in and hold.