I still feel I’m in the midst of the businessy stuff. The photo shoot of the shed in my garden is happening tomorrow (pray for a nice dry day). When this was originally organised it was going to take place in June. My garden is a bit ramshackle, but in June it is glorious, this week at the tail end of August it’s a mess. So we’ve spent the bank holiday weekend making everything look falsely pretty in the vicinity of the shed at least. Pansies in pots abound! My husband is mystified by me wanting to make the rest of the garden look nice too “they won’t photograph the bit by the kitchen window will they?” No, they won’t. But I want ALL the garden to look nice, so I feel ok about showing it to people I haven’t met before. The heap of rubbish (waiting for a skip we haven’t organised yet) has to be hidden behind the cherry trees. The white plastic mouldy manky chairs are hiding by the aforementioned kitchen window…they’ll eventually go into the skip too.

Today I have had a similarly manic day in the house, doing all the housework I’ve managed to avoid doing over the last 6 weeks. My 16 year old son thinks I’ve lost my mind. I’ve done half the ironing, but had to hide the rest. The vacuum cleaner now won’t fit in the cupboard under the stairs because I’ve hidden all the other junk there… it may end up in my car. It feels like it did when we had the house on the market then took it off because we could bear the stress of tidiness no longer.

I suspect the focus of the mania will shift to my person tomorrow. I will try to tame my sheep/hedge/brillo-pad-like hair. I shall wear some distracting red lipstick. I will find something suitably bohemian-but-not-mad to wear, possibly worrying about whether it clashes with the shed (or the lipstick).

Oh, and I got the residency! So on Friday and Saturday I will be transforming a project space in the White Tree Studios as part of the Junction Contemporary Arts Festival in Chapel Ash, Wolverhampton, so if you are around, feel free to come and say hello!

Back to work on Monday… will be glad of the rest! 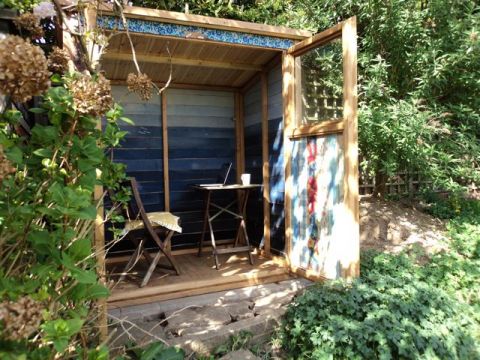 I know artists use their sketch books in many different ways. Mine contains writing as well as quick sketches, detailed visual plans of ideas, photographs and half baked ideas thought about in the wee small hours, some of which I’m convinced are genius at 4 in the morning, and bound to make my fortune, which turn out to be mindless drivel by 9.30. However, my sketch books are the repository (or depository – my dictionary tells me they are the same thing, but I’m not convinced) of all my thoughts.

A couple of ideas have been meandering through these books for about 6 months, waiting for me to have the time to try them out.

The first is the making of paper clothing. This concept seems, in my book, to be fully formed and sensible. I have explained why I want them, how they fit with my thinking and what they will look like. As far as the book is concerned they are a Great Idea. Pfft. Are they my a^&e! I made some and they are rubbish. They are perfect in every way I intended, but they don’t work in reality. I’m holding them and they are a nonsense. I hate them. They don’t work. Bloody Tosh!

The second is mutant clothing. You take all sorts of identifiable bits of clothing and stitch the bits that fit next to each other, together. Easy! Looks great in my book. You should see the drawings… I’d show you, but I’m embarrassed that I thought this such a Fabulous Concept. More nonsense, and I’ve ruined a couple of quite decent items in trying to make it work. What a waste of an afternoon!

Frustration has set in. The sketch books that lie to me have been cast across the room. I’ve got other things to sew and make and draw and write and sing, but these were the things I had set aside time to work on. I’m so disappointed. I’m off to put the kettle on again.

Just a quick one today with a couple of photos. I like working with these old clothes and threadbare household textiles. There is a feeling that they might fall apart in your hands as you stitch them. I’ve come to love the softness and the whiteness tinged with yellow, or stained. I think perhaps I’m intervening… or interfering?

If the long school holidays do one thing for an artist who supplements their income by teaching, it’s that they give time for the play I mentioned in a previous post. You can carry one train of thought from one day to the next, without it being derailed too much. However, as the end of August looms, I find I start to panic. There are things I need to do before I go back. Things with my family, my home, and of course my art work. I need to set things up so that I’m kept going through the autumn. Clear the decks for the weeks to come. I have to be back at work on 5th Sept, so I’m a woman in a hurry!

I’ve had a busy businessy sort of week: I’ve put in a proposal for a residency; arranged a photo shoot; a recording session; framed and delivered work for exhibition; decided on dates for next year’s Life and Other Art exhibition; made preliminary approaches to a couple of musicians I was unable to book this year, paid a couple of research visits to a place I’m thinking of doing an installation/ residency.

In between all this we’ve decorated my son’s bedroom, and erected the ubiquitous flat-pack desk so he can start his A level studies with a fresh space.

I’ve been thinking about what to plant in the garden next to the shed for the photo shoot as everything that looked glorious in June now looks like a brown dead patch of twigs.

I must do some practical ironing, not just little bits of fabric and useless but attractive items of children’s clothing from charity shops.

Finished a piece of tricky embroidery that’s taken about 6 weeks.

Written some lyrics I’d like to become a waltz.

Had a bit of a display brainwave…

Tuck in the child tight

Put him to sleep

Switch on the alarm

So he can’t come to harm

Zip him up cosy

Wind round the scarf

Wrap round his heart

Don’t let him out

In the cold or the night

Stitch him a quilt for wherever he goes

A portable mother to comfort the woes