It’s been a grim month.

I say this not to extract sympathy, as I know we all have grim months, but to sort of highlight the effect it has on my work. The recent show was titled Cause and Effect and this is why. The latest piece is dark. Even I see it (I sometimes don’t!) stark in front of me, spread out on the table. I have strayed into charcoal, which anyone who knows me or my work will see as a departure. I am a clean and tidy worker. Charcoal has been for other spaces, drawing workshops, students, working with children… but not my studio.

And yet here it is. I still have a watercolour washed ground to work on, a pale ochre. The charcoal has been rubbed into the texture of the paper (this is why it was allowed in I think) and takes to it beautifully. The shapes and clouds and lines are familiar, still reminiscent of the bodily and the visceral. The blackness sucks me in. I try to layer it up to get it blacker and blacker, fixing and drawing over and over… And then, another layer of graphite working lies on the top, reflecting the light that the charcoal absorbs.

So this grim month? Some of it will stay with me forever. Deep and black. Ground in. Some I’ve been able to shake off. Some of it has left a smudge that will fade over time.

I love the metaphorical. In drawing and in words. To live in metaphors is so very human.

I’ve abandoned the green monstrosity. I may chop it up for collages or something at a later date…

Yesterday the opposite happened.

Over the weekend I cut another narrow strip and laid some paint down. I’ve been using a combination of Indian red and alizarin crimson, in various proportions and it gives this lovely rich skin and blood colour…

I put the paint on the paper first thing on Saturday morning, then spent the day in the gallery with a load of families and a bunch of brownies for our Big Draw day (there’s another on October 19th).

So on Monday I had a good few hours on it. This time it just seemed to go how I wanted it to… tight bands and then a bursting out… pressure and release. It was feeling good to do it and I like the results. This is the best it has felt… this is what I’m aiming for. The feeling while I am doing it is important, not just how it looks when it is finished. 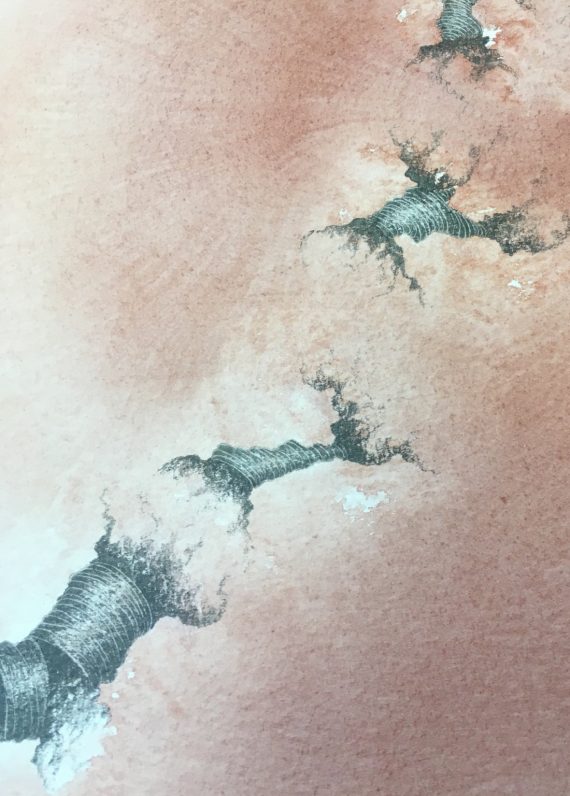 I’m three days in to a new drawing and I don’t like it.

I used some green paint that is a weird texture… gritty but not in a good way, more in an accidentally got dropped in a gutter kind of way.

The pencil isn’t working on it like I feel I want it to. I’ve already cut a foot off the end of the strip because of monumental eraser-related cock up. I don’t usually use an eraser, but it was an emergency that I made worse. It was merely infected. Now amputation is the only answer. 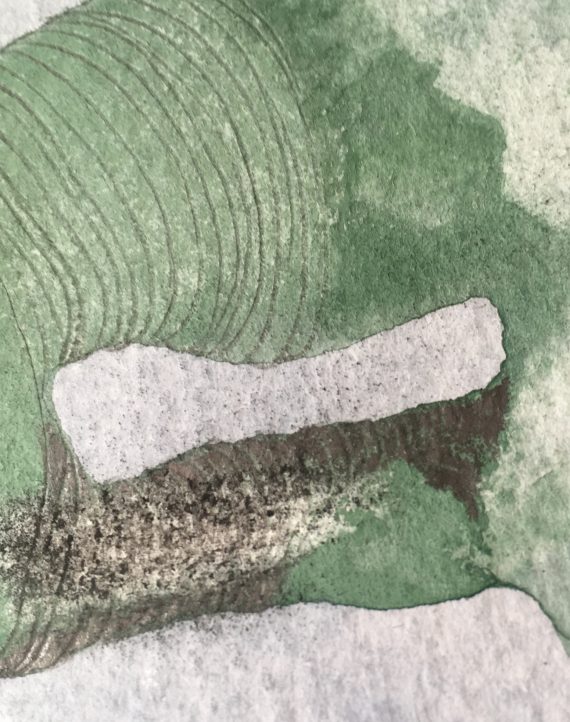 These large drawings are an investment of time, as well as materials. By cutting off the bad bit that was fortunately close to one end, I could reassess the composition before proceeding. Before then it did have a pleasing asymmetric quality, but now it’s all a bit samey. So the question is do I carry on drawing, or do I smash another bit of Payne’s grey over it?

My indecision is leaking. My irritation is leaking… from life outside the studio to inside the studio. This often happens. And I SAY it’s what I like, what I want, but really? Not so much… This afternoon I could do with a bit of studio peace and steadiness leaking back the other way. It kind of works when I have a full day to work through it, but not in a couple of hours. That just gets me to peak calamity with no time to redress the balance.

Oh bollocks. Get the kettle on.