Writing is a strange activity, and I’ve been thinking about how I do it, and whether this is an efficient way to do it. I’m talking about so-called academic writing here, not the odd bit of lyric writing or blogging I do.

I was heartened to hear the other day from someone who has reached the dizzy heights of a PhD, that she spews everything that’s in her head onto the page, then sorts it out later.

I know someone else who makes notes neatly gathered under headings, then extrapolates and develops, so not a spare word reaches the page.

I scribble all sorts of interesting notes in a book, some of them have no relevance to my topic, they are just interesting to me. Some have a reference, some I forget to reference then have to scrabble about to find again. Some have come out of my head, tying my thoughts in to what I’ve read.

I just wrote about 1500 words to go with my quilt-as-essay research. This is way too much – I might as well have written a 5000 word essay rather than gone for the “negotiated alternative”. I wrote what I thought, which at first was about 500 words, but then a structure was imposed upon it, from my tutor. It tripled the count, but to be honest, I’m not sure the content has tripled. It certainly doesn’t need to… I don’t think. So out come the scissors again and I shall snip it up. There is something useful about the physicality of using real scissors rather than clicking and dragging on screen. I’ve been told my writing style is unnecessarily flowery for an academic essay, and I know I’m prone to repetition, particularly when I’m given sections/headings to write to, as some things fit more than one section, and because I can’t make a decision, I shove it in twice.

All the above rubbish has come about because someone has suggested that my quilt project could lead into PhD research. But the way I go about things seems ridiculously inefficient. If it takes me this long to work out the words for a relatively short essay, I’d be dead before the completion of a PhD. Old habits are hard to break though aren’t they? 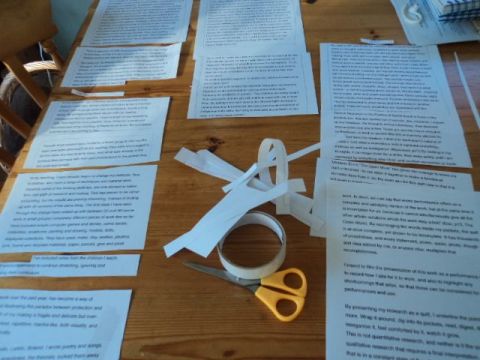 In some ways, today has been frustrating. Things were cancelled at fairly short notice, so I found myself in Birmingham with plenty of work to do, but without much in the way of motivation. I convinced myself to read, but noise followed me around the building, even into the library. I had a couple of solitary visits to Starbucks on the corner, usually this is done with others, and accompanied by discussion about work seen and arguments on its merit or otherwise.

On another day I might have given up and gone home, but I’ve got Dan’s gig to go to this evening, so decided to stick it out, as driving home and back into Birmingham later would just be horrible! So I had a little trip to Marks and Spencer, Monsoon and Muji (only shops beginning with M). Bought pens, not posh frock or pants (only looked at things beginning with P). I don’t think my husband appreciates what a rare woman I am!

Then, in a fit of time-killing boredom, switched on the MacBook again to check emails and read my statement…again. Good news is, my tutor thinks it’s nearly there, but as always with my writing, needs structure. Blogging is good, allows me to ramble along being flowery and descriptive and have a bit of a giggle, but it’s not doing much to improve my academic writing.

I wrote a bit more, jiggled it about a bit, but think I will end up printing it, literally cutting it up and put all the similar bits in piles (see? I can do structure!)

So, this last hour has been quite productive really… I’ve also had a few more thoughts about my Big Idea, confirmed a couple of meetings and wrestled with whether I should let you in on another, Secret Idea. I think not. Not yet. But watch this space.

(00:40am… Just got back from Dan’s gig… Bloody Marvellous! Buy his album, it’s gorgeous) (www.dan-whitehouse.com)

Feeling much more positive than I have over the last few days. The work is going well. I think I have resolved the lullaby/textiles problem, at least in my head, and enough to show at a group tutorial to get feedback from my peers and tutors. The Quilt-As-Essay is also going well and seems to have universal approval, I just need to make it fulfil its early promise, and deliver what I’ve said I’m going to. I’ve done all of the onerous tasks and the navel gazing, so I can now get on with the actual business of the research… I can’t believe I lost sight of this in amongst the Deleuze and the Bachelard. I am now starting to collect anecdotes about children taking risks, either stories from adults who remember tales of their own derring-do, or courageous parents of adventurous children who do so now, or any who are prevented from doing so in the name of protection. I welcome any tales my readers may like to impart!

Dan and I have a meeting to do with our Big Idea… Hurray!

Dan’s debut album is now available to listen to online through facebook, there is a link on his website at:

It is truly wonderful, well worth a few clicks to find and listen to. The album launch is at Birmingham’s Glee Club on Wednesday 26th… Can’t wait!

I was going to take a picture of the honey and almond cake, specially for David Minton, but it was eaten before the camera battery charged!

Sometimes this a-n blog thing drives me mad, I’ve written this comparatively short post twice and each time I press the save button it throws me out and loses it! GRRRRR!

So, third time, I’m writing it elsewhere and pasting it in.

Right, where was I?

Thank you everyone for your comments, not just here, but on facebook, twitter, via email and in person. They all help me in the decision making process. At the moment my thoughts are as follows (though anyone who knows me will realise that anything could change in the next half hour):

I originally wrote it to sit with my textile pieces, so when it does this, it is part of the art.

How it does this remains to be seen, but I have a couple of weeks to sort out this thorny issue before I feel able to present it confidently to my peers.

Today I shall attempt to squish a pair of speakers into a piece of furniture. I suspect there will be a good deal of swearing involved.

I shall put the kettle on and perhaps make a cake. Want some David?

It’s been a thoughtful week.

I played with my lullaby in a huge project space in Margaret St on Wednesday. I fiddled with speakers, volume, balance, position, channels. I sat, stood and wandered about. I listened to different edits and mixes and made some decisions I was happy with. This was how I wanted it to sound. Smiles and cups of tea all round. Nodding occurred.

Then I had a tutorial.

Then I was grumpy. I left the building feeling all the decisions I had made about my work were not valid, or strong enough. If you’ve followed this story of music as art you will know I was a bit wobbly about it anyway, so this knocked me a bit. I have written lists of comments and questions made, and tried to answer them. I know that’s what I signed up for, so I’m not really whinging about the process.

I think the main issue for people (other than musicians apparently) is the fact that it is a song. I make no apology for this. It is fairly polished in its production, and it is musical. I make no apology for those things either. That’s what I wanted. I wanted a contemporary lullaby. Older tunes and older words didn’t fit for me. I tried them, that’s why I ended up writing my own. I want it to sound like a “proper song”. I want people to hear it as such. The successful display / playing of it with the other work was the issue for me.

No, I don’t want it sung by a “younger” voice. Mothers are mothers. My voice has just as much validity as any other mother. More, in fact, because aspects of the work are personal to me.

No, I don’t want to make it rougher, just so it can be more comfortably fitted into the “Sound Piece” category and be less of a song… in fact, I have quite a problem making something complete sound rougher by taking things away from it and effecting a false roughness. I like the fact that the sounds I recorded are hidden and woven into the song.

The embroidery that I do is subtle within the garments… the match works for me.

And alongside all this that I’ve had to think about, I am STILL no closer to answering the display / play questions.

Now, I find I’m wrestling with an almost moral issue: do I fight for my song to be how it is, or do I just make another edit, rough it up a bit and jump through the hoop. (I have made this edit, and it’s crap, and I hope it never sees the light of day). If I wasn’t doing an MA, I wouldn’t even be contemplating making these changes.

I have spent some time thinking about whether these two aspects of my work, the audio and the visual, have different audiences. The conclusion I have come to is that the song is happy to sit on its own, but now, without the song, the textile pieces are less.

What does that say about where I take my work in the future?

I heard this week that a friend is very ill and has a long stretch of surgery, treatment and recovery in front of him. This arty bollocks pales into insignificance. 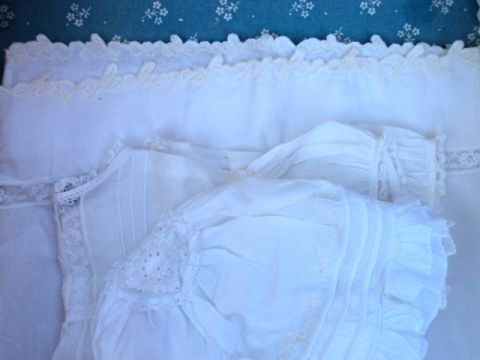