So the task I have set myself, for it is indeed a task, is to play.

I know of the value of play. I can even give you theories if that is what you need to back up the reasons, the seriousness of the matter. For four decades or thereabouts, I have played with children, learned about children, taught other people about children and creativity and play…I can quote you all the famous ones: Piaget’s symbols, schemata and process; Montessori’s play being the work of the child; Erikson’s mastery; Vygostsky’s zones of proximal development; Froebel’s nature table and free expression… all trying to make sense of the world through the eyes of the child, and also, one might argue, the eyes of the artist.

After the Arts Council project, ending in the performance, exhibition, publication, recordings… all showing a level of mastery, I now find myself yet again, floundering around looking for the zone of proximal development. So I instruct myself to play, allow myself to play. INSIST I play!

At the moment it is frustrating to say the least. It appears I am no longer able to draw or sing. I need to find the place that is the point of balance… I need to have in my sights that which I was successful at, while simultaneously pushing ahead with something new. I need the confidence lent to me by previous success, while I also need the challenges of the new, to enable me to move forward and learn more. But that’s a very linear way of looking at things, and we all know that creative thinking doesn’t happen that way. I must trust the process that I’ve done before.

So today I play. I chop up old drawings, chuck a bit of ink around. I try some new materials: bamboo paper, walnut ink, masking fluid… and I sigh at the sight of it all. I’m not sure how long this period will last (if only I had a useful chart courtesy of one of those theorists). But I must let it happen and not worry about it too much. It’s a serious business, play.

It is, and yet it’s not. I have to let go of all the theory, let go of the seriousness, just let it happen. I should not be worried about judging the quality of what I make. Indeed, maybe I should destroy all I make for a little while, so I actually DON’T take myself too seriously.

After my last post about the frantic activity of bid writing, things have turned around a little…

For some reason I always forget what it feels like, The Slump. I know it is coming and I predict it. But somehow I forget those nuances. It isn’t just that I don’t have the focus of the project, or that I don’t have Things To Do, it’s something to do with the work itself, and how I feel about it.

Over the last week I have been playing and experimenting with different paper, different colours and different marks even, but I don’t like any of it. I had forgotten this. The door has closed on Drawing Songs, I feel that was successful, and I’m proud of the work I did and how it was received. But despite having a list of ideas to work through, I had forgotten that this period of experimentation will feel rudderless, pointless, and that I won’t like anything I make.

It is impossible to feel successful and proud continuously. Part of me feels like I should push forward with bravado, and professional confidence, the job has been well done, so here I am… but that isn’t how it feels. There isn’t some smooth even-stepped art career ladder that starts at 22 and gradually climbs. Maybe for some it is. But for this 60 year old woman that feels like she’s only just started, the terrain is rugged. I stepped onto a rock that feels secure, but to move on from here? I’m not even talking about UP (whatever that means) just to move ON…

Over the last few weeks I have been talking to other mature artists (by which I mean over 50) and we all have a sense of weariness sometimes. I stare at the up-and-coming with a sense of scepticism and cynicism and wishing I had their energy, a little bit of that attitude. We are here though, still at it, because we are still at it. With this tenacity, determination and yes, bloody-mindedness, comes that world-weary sigh.

I am actually quite good at telling others to keep at it, that I think they’re great, their work is terrific – because it is! The artists I am talking about have made work that really means something to them and to me. It comes from a real place, their heart and their real lives, not some pretentious art-life.

But I’m not very good at telling myself. It’s not a thing that’s easy to do once the slump has hit. Although I do have some tools. When people write to me, or send messages saying they liked something I made, I keep it. So that when I have trouble telling myself I can do this work, I can read those words and start to build again, post-project, mid-slump.

I also wondered if I should write this? Because there’s nothing less attractive than self-pity. Especially from someone like me who has had good fortune. Nothing more boring to listen to than moaning. But… this is real life as an artist. It is the only work I can do that makes me happy. Without it I would quickly go down.

I’m not sure it is self-pity really. Perhaps a self-awareness. This too shall pass. In amongst all the crappy work I will do over the next few months, will be little nuggets of loveliness I can build on. I am ever optimistic!

I suppose I write because it is my truth. I have just completed an Arts Council funded project to a great level of personal satisfaction. That’s true. It’s also true that it took me about seven attempts to get it funded.  And now it’s true that I feel that all the work spread out on my studio floor is rubbish. I’ve got out of the habit, over the last 18 months, of knowing this is mostly how it is. Hopefully the tenacity that kept me re-applying for the funding will stand me in good stead and I’ll keep playing, producing crap, until at some point, it’s not.

A few days on, and despite promises to myself to take things slowly and relax a little into the new year, I found that I didn’t.

Since the project drew to a close, I have been thinking about all of the things I could do next… and also how to follow them up.

You may have read about my work improvising and drawing in live performance with sound artist Bill Laybourne (blog posts 8th August and 31st October 2021). Both of us have been keen to follow this up, and in conversations that followed, we decided it would be good to find some funding for it, so that we could do it properly and dedicate a decent amount of time to it rather than snatched bits of time between other work. So last week we had a couple of sessions over mugs of tea and wrote a bid for a small amount, just to dip our toes in the water to see how it works. We shall see. It’s going to mean just a few days pay for each of us, but if we are successful it will mean we can concentrate on it.

Then a few days after I discovered another pot is available and thought as I have just rewritten and updated my CV, I might as well apply for it for myself! This is not what I thought January would be like… I thought I’d be mouldering about in the swamp of slump for weeks yet. But I suppose it means I will have at least six weeks to wait before I hear anyway, so can squeeze in a bit of mouldering then.

Thing is, apart from the workshop at RBSA my earning from anything else is severely limited at the moment. I am not inclined to invite people into my studio for workshops, and not keen on going to places where the space is limited, unventilated, or I am unsure about. So funding pots are the thing to go for.

After a year and a half of Drawing Songs, abstraction and sound, I feel the need to feed the roots of my drawing practice. I need to do some drawing out in the fresh air… following nature… soaking up some sun… whenever it appears… take a breath…

I start to get twitchy if it gets to two weeks and I haven’t blogged. I shall call it a holiday to make myself feel better. Not much art has happened over the Christmas and new year break, but that’s ok. I needed the rest. I am still tying up loose ends from the Drawing Songs project, and Laura Rhodes and I are in the middle of editing the project video. Its purpose is a reminder to myself as much as anyone else, of the work done, and the distance travelled.

I do have lots of “leads” to follow up… conversations I had during the last year that can now be followed up, and I look forward to that.

There’s a distinction to be made between the end of the funded project period (mid December) and the fact that my practice continues through that and beyond. I did what I said I would do, and more. So I don’t need to worry about that. And now it’s quite nice to know that having answered my own questions, I can continue allowing the work to unfold without needing to document it or justify it. It’s like learning to drive after getting your licence in some ways. Having found out a few things and having had a go at some new things for the project, I can now let them sit. I can continue drawing and writing and singing, in the knowledge that these things have an effect on each other, but I no longer have to watch the pot. So since mid December I’ve drifted into the domestic, the festivities and my wonderful family, and I’ve been able to thoroughly enjoy them.

But now, as I said, I start to twitch and need to get back into the swing of things, occupy my neglected studio, just start doing again. In the absence of a clear focus (which is absolutely fine) I need to just exercise the muscles again for a while. I’ve been doing some observational drawings of some beautiful knobbly gnarly twigs with lichen on, and they’ve really satisfied an itch to draw with purpose. I’ve also signed up for one of Sarah Goudie’s drawing sessions at the end of the month. This offers the opportunity to let go of the reins, and explore in a different way. It also offers the opportunity for conversation, and small collaborations. I will use this session also as a brain and muscle strengthening. 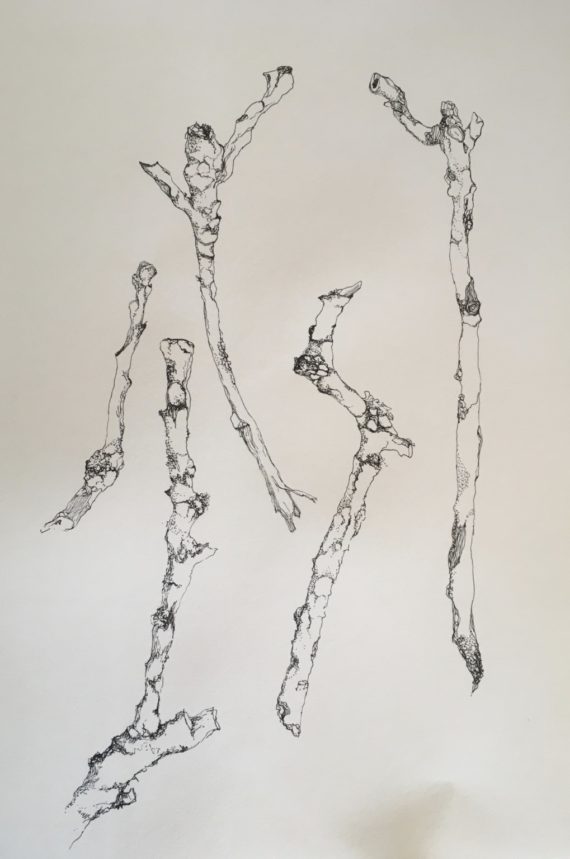 In February half term week I am delivering my first workshop for the RBSA. It has been almost three years since I did anything that comes close to teaching, and I am actually looking forward to it, under the protective umbrella of my new group. I am doing a Drawing to Music one-day workshop. It’s going to be lovely to stretch out to other artists in this way, after spending a year doing it myself.