I’ve found the need to get a handle on this discussion about the personal and the universal that’s been going on in other people’s blogs, namely Jane Boyer’s ( www.a-n.co.uk/p/1800787/ ) and Anthony Boswell’s ( www.a-n.co.uk/p/984199/ ) So in the style of David Riley (see his blog entry no9 on www.a-n.co.uk/p/1101647/ ) I have scribbled down my initial thoughts. At some point, when I find the words, Jane’s discussion on abstraction will slide into it somehow, but in the meantime, I put this up for people to laugh at or comment on. A venn diagram may prove to be a better model, or some rhizomatic mass of blobs (AAARRRGGHHH!!!!). On the other hand, I may consider it all way too Arty-Bollocks and rip the page out. 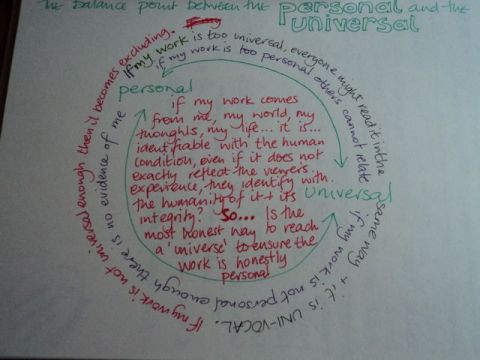 Research project and associated writing is finished, printed and ready to hand in. I’ll stop going on and on and on about it now. Promise.

Doing this MA has its ups and downs, and sometimes I’m not sure which is which. I am itching to get going on a few things, but have a deadline on 4th January to hand in my Quilt-As-Essay research assignment, and on the same day have to hang my work for stage 2 assessment. I will be really glad when these are done. And at the moment, don’t care what mark I get, just want to hand them in so I can clear out my head and my work table for other things. So the course does make me finish things, and give me a structure to work within. But I’m sure there are things I’d have left half-finished otherwise… makes me a little worried about life after graduation!

I’m dying to have a go at doing a blind self portrait like Jo Farnell has done in her blog – post 17:

The possibilities in this idea I think are endless, and have the potential to be hysterically funny! Got to have a go – but will wait till everyone has gone out, lock the door and draw the curtains first.

I also want to start playing with clothes for my next idea, which by the time I’ve finished playing, may well end up as part of my final show.

Should I stick with white clothes?

Make my own or use found items as before?

Embroider white on white as I have before?

Or black on colours?

I’ve just been for a bit of a boxing day walk with my son. Walking clears the mind, takes away distractions, aids digestion, takes you on conversational flights of fancy that really helps to make sense of the world.

We talked about Art, Science (he is a scientist, though would argue otherwise), teaching and learning. We both teach in some manner, but would rather do things in our own way, being rebellious by nature. We have this repeated conversation in which we fantasise about setting up some sort of academy wherein there are no separate subjects but the children learn to cook, move, express themselves in some artistic manner, and grow things. Everything else is learned along the way. Anything that isn’t is not hugely relevant anyway. I decided I’d like to be called an Artist rather than an Artist Teacher, or Artist Educator, would rather the children were able to say they were taught by an Artist rather than a Teacher. My son thought he’d rather the students he teaches thought of him as a Scientist or Mathematician rather than a Teacher. The result of this would be that old saying about “those who can’t, teach” would be up-ended. Those who can, choose to teach. The professional development would then be according to subject, we would remain enthusiastic artists and scientists, rather than teachers. The status of all would be enhanced, we thought. (We did add a proviso that good teaching was essential, we wouldn’t let any old geek or boho loose on these children)

In this ideal world all children would be able to think for themselves, work with each other, plan, cope with disaster, enjoy the small pleasures of a real life.

Christmas is a good time to be remembering such things as small pleasures and real life, while still finding time to dream about how things could be better.

I think my feet have now reached the ground, have got myself organised at least… lists have been written, jobs allocated, new dishwasher arriving by skin of teeth on 23rd!

I found myself in a state of unparalleled joy yesterday, in, of all places, Marks and Spencers!

For almost a year I’ve been thinking about musical boxes, and how to include some of that evocative sound in one of my recordings, but nothing quite fits… well… I’ve just had an idea about my final MA show and it’s very much about my mum … unexpectedly it has become quite personal…. I’m rambling I know.

Anyway, among the ridiculous “stocking fillers” for £10 and upwards sat one, lonely little cardboard wind-up musical box. My sweaty little mit grabbed it instantly from under the descending hand of another shopper. I was happy to have one of my own to play with, to record, and transform the sound. The joyousness of it is that it plays “Edelweiss” which was kind of my mum’s “Default setting” tune. For the vastly over-priced £5 for such a piece of tat, I now have the beginnings of something like a soundtrack. I’d have paid £50. 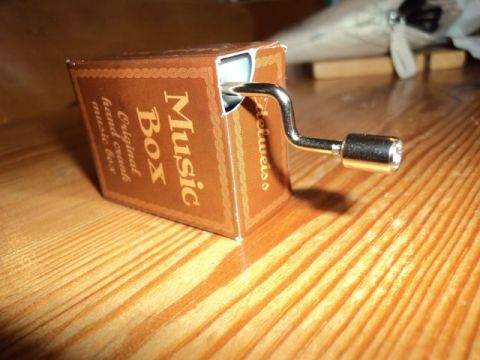