A while back (post 7, 4th July, actually earlier on than I had thought) I asked the question “What’s wrong with obviousness?” Because at that time my work did seem obvious, I defended the position, saying that obviousness made my work accessible to a “non-art” audience such as my quilting group. An element of this is still true I think, but I’m doing them, and myself, a disservice perhaps. I think I’m starting to work past the obviousness and the work hasn’t suddenly become incomprehensible!

I’ve also stated in recent discussions that my work has a little edge of the confessional about it.

If I work in an obvious, literal way, it is very difficult to include the confessional elements. Confessions are supposed to be secret, held sacred and dealt with quietly behind the screen. (Catholic upbringing, sorry, can’t help it.) So when I do make or write something confessional, I feel the urge to hide it, cover it, stitch it inside, rip it up, unpick it.

I had also thought as I worked through my ideas that the text, the subject matter would become less personal, more of a “universal truth” (Why did I think this? What is the basis for this premise?) But I think I’m finding that as I develop the means to be less obvious, less literal, hand in hand with that is the means to be MORE personal than ever before. Moreover, the way for me to express a universal truth is to be as personal as I can. 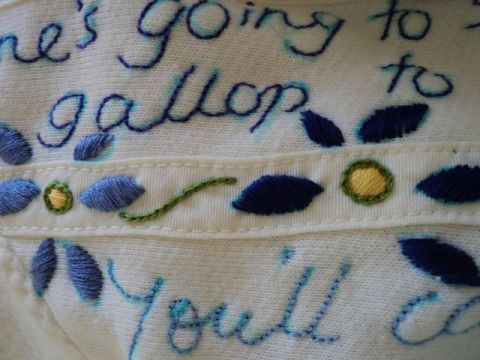 phew what a week!

I’m being geeked out a bit at the moment. I have a memory card with a 30 min film on that I want in a different format… The very knowledgeable computer man is being very patient with me, but I don’t really want to know. I just want it done. Then I can think about the other stuff. I find it interesting that I have no patience for this, yet I’ve stitched things that make other people’s eyes boggle. One person’s geek is another’s rivetting expert I suppose? He’s now disappeared and says he’ll be back… in an Arnie kind of tone… worrying.

Recording was great. I felt much more confident this time, so just dived in rather more easily I think. It’s not just the confidence to sing in front of someone for whom singing is “their thing”, but feeling confident to express what I want to happen, how I want it to sound. Slowly I think I’m developing the vocabulary to express these things too.

I spend increasing amounts of time listening in minute detail to the same piece of music over and over again, tweaking sounds, levels, tempo… blah blah blah

This song does sound different to the lullaby, but has a few things in that are similar too. I have used ambient domestic sounds again as percussion, looping them, changing them so they take on different qualities. It’ll be a while before I get to play you this one. I need to rerecord some bits, and another friend has agreed to play a bit of violin for it too, hopefully. I’m astonished that other people can be bothered with my projects and be so generous with their time and talent. I’m hoping that I’m capable of offering some sort of creative activity in return at some point.

While I’ve been writing this on my laptop, the big screen is crunching its way through the video, making it small enough and friendly enough to play on any old pc with any old software. I’m beginning to wish that I’d just pointed my compact digital camera at it for 5 minutes, rather than having a great big camera and humungous file to wrangle with. The Man has now gone out to lunch and left me with hastily garbled instructions as to what to do next. I’m hoping that the selection of young men around me will rescue me if the technology defeats my very small brain.

The man returned, the file was sorted, hurray! Should be fine now to duplicate and hand in.

Also, had a tutorial… Have talked through my new display ideas and have developed something new that I think will really work. When I’ve tried them out I’ll post some photos for opinion. My tutor really “gets” my quilt as research essay type thing, and has given me some interesting ideas to show it for assessment that I think will enhance the performance/function element of it.

So other than a few hours in the middle of the day that tried my patience terribly, It’s been an amazing couple of days that send me into the Christmas holidays full of ideas and thoughtfulness.

Got another recording session tomorrow. New song, new feel, and this one is designed to sit on its own, so no angst about how it’s (dis)played.

…will let you know how it goes.

I’ve had a new idea. I’ve scribbled it in my sketch book as usual, but the real life necessities are getting in my way… Christmas for instance. There is so much to do, in my home, with my family, for my course, in my job, that I can’t see me doing anything practical and getting down to making until mid January.

January is usually that month where most folks take a bit of a slump isn’t it? You work your way up to Christmas, have a mad and frantic happy time (if you are very lucky, I am aware it is not like this for lots of people). Then it all stops and real life plods on.

I’m really looking forward to mid January this time. By then my research will be handed in, possibly marked. My stage 2 practice will have been exhibited, assessed and marks fed back too.

Then I will have the time, and more importantly the head space, to start on the making of the new idea! 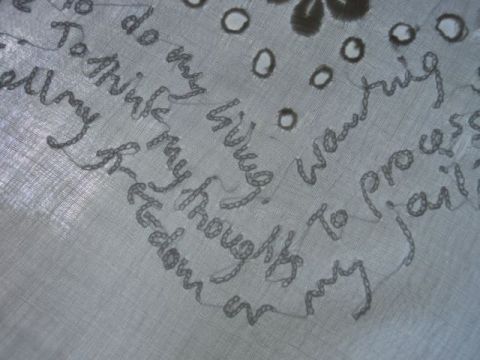 Well I did it. I think the presentation went well, I had raging sore throat, and this morning feel shocking, and keep losing my voice. It went as I had planned, the technology mostly behaved itself, I had a section where I’d planned a series of images to run with the lullaby. This didn’t work so luckily I had planned for failure and had taken all the separate files and just did it as I went along. It was hard to guage reaction as it was dark, we were pressed for time, and I kind of zoned out a bit… don’t know whether this was because of stress or the medication taken for the sore throat.

It appears I wil have to write more, to explain my concept more clearly, to show my understanding of the principles involved. 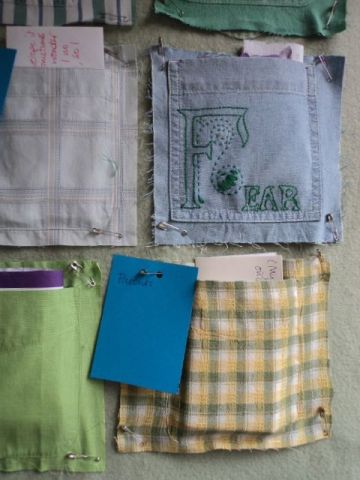