I often wonder if the way that I work has stemmed from my need to do it at all times? The need to stitch while watching tv, cooking, even during conversations with my family, often results in furious/confused silence when I have clearly not heard, misunderstood what was said, or have stopped dead mid-sentence, distracted by my own hands.

Sophie talks about the incessant moan of not getting things done. I used to be like that, but I find that by doing the sort of work that can be done anywhere, this problem can be avoided (although, as I’ve said, others occur). In this way though, my work doesn’t just reflect the life I lead, it is part of that life and the way I lead it. That’s why I could never have a studio away from home: the home is inextricably linked to the work.

I’m all for the “epic time served” too… my “keepsafe” baby dress embroidery took me about 8 weeks to complete, stitching approximately an inch and a half each evening in front of the tv. If it has no other worth, it has that. It has the “Dear God, woman are you mad?” response.

As for the pursuance of a successful career, that depends on your measurement device. Me, I’m happy if can afford to keep doing it, without having to get a full time job that prevents me from doing it. There aren’t many shops that’d let you carry on sewing while you served the customers. Haven’t seen anyone doing that at the checkouts in Sainsbury’s. I’d also quite like the occasional opportunity to show my work to other people, and I’d quite like them to say nice things about it. How about that for driving ambition?

In response to my last post, David Minton’s comment about not getting “in the way of delight” has really stuck with me. I think, if it’s ok with David, I might use this phrase somehow. It has melded in my brain with the ethos “if you can’t do good, at least do no harm”.

As a motto for teachers, it initially feels a bit negative, a bit lowest-common-denominator. But actually, as a teacher of art in a primary school, after some thought, it starts to sound pretty damn good. I have, on average, the responsibility of teaching art to 120 children between the ages of 7 and 11, every school year. I’ve been there 7 years now… actually, nearly 8. That’s…. Hang on….. That’s 330 children! (that bit of maths hurt my head, and I had to get help, because I originally thought it was 960 – shocking!) If I have sent most of them out feeling good about my subject, or at least, better than they did when I started, that’s got to be a good thing right? If I add in all the after school clubs and workshops, and subtract my own 2 children who seem to have learned nothing from me, that’s about 500 children.

If I also take into consideration that I have taught 5 groups of training teachers – 25-30 in each group – who will eventually have charge of teaching art to their own classes, it starts to get into silly numbers… even if you factor in the high percentage that may not have been hanging on my every utterance!

I think I may have my angle.

I might get the children to write a song!

(I’m still not convinced about the maths actually, but there you go!)

It’s MA Art Practice and Education. That’s the tricky bit. For the end of the course I am supposed to link my art practice to education in some way. Using 2500 words. Not too many. I’m sure I’ll cope. The problem is that because most of the education I do is in a primary school, it is mostly inappropriate to link my work to what the children are doing. As the course has progressed I have found it harder and harder to link the two. And I have become more reluctant to find a link. This art practice is MINE. It has only just occurred to me (and my tutor) that I could think of a way of ditching the primary and look at education in a more holistic, universal (that word again) kind of way. I’m looking at my work and what it might say to its audience. I suppose the fact that it has lots to do with children and parents and how society views parenting might be an angle to pursue. Also the fact I have a chance to effect the opinions of training teachers might be too (although what I say when perched on my soapbox may not have any effect at all). But can I just look at my work, in solitude, and presume it has the capacity to educate, just by being regarded at all? Can I use the participatory/ performance angle of what goes on in my shed? Or when I make recordings? Does Art as a whole, with a capital A, have the capacity to educate? If we say yes, then do we run the risk of limiting other capacities? If we say no, then are we doing it a disservice?

Shall we just leave the answer a grey but knowledgeable “It depends” then? 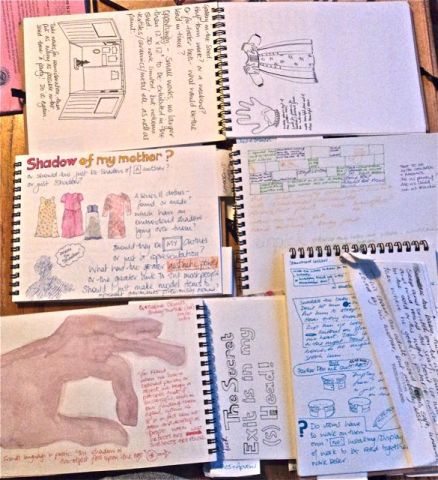