After the previous post, playing with labels, the labels have remained in the little basket on the table. Considering the amount of time it took me to make them just for that small amount of shuffling, I wondered if it was worth it. But even as I write I know that it was.

There are times when actually doing it “works” better than abstract thought. Writing the list, stamping them out (however untidily) and getting my old-fashioned school guillotine out slowed and speeded the process. Slowed because the act of making prevented me from drawing the conclusion too soon before a thorough thought process. Speeded because once I had them in my hands and on the drawings, my conclusions were much clearer. I could feel a certain rightness about it. Then, having done so, I no longer need them.

And I do feel that something has changed about the drawings. I’m not completely sure that’s visible to others. When the light is better I’ll take a few photos and have a think.
I think my lines are not so smooth. The shapes not so rounded and ripe. The decay is more visible too. New elements have crept in… And a shifting of the colour palette…?
I do feel though that these are microscope slides … Snapshots…. it is not possible to see the enormity of the process yet. I hold back… Still… Physical space is still my issue… I want to grow it in the laboratory conditions of my new studio. I’m itching to get at it… 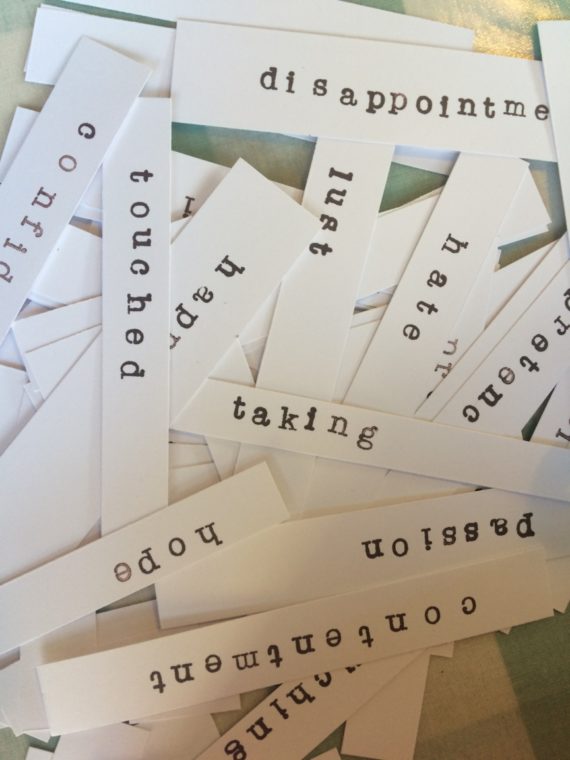 Here I have a selection of labels, the words on them are taken at random from my sketchbook and other conversations…

Stamped and cut then jumbled, pick a card, any card… I keep my eyes closed so not to cheat!

Then arranged, here on the same drawing, wherever I think they are appropriate at the time.

Now I like this… I am not yet able to articulate why though… something about the movable, temporary nature of things and the interconnectedness again, and the fact that one person’s greed is another person’s prudence…

Answers on a postcard please…

I’ve ummed and aahed about posting this piece of work as I can’t decide if it is an instructional sketch book piece purely for myself, or whether I might do more. I’m currently on the side of just for me… But it’s open for discussion. It’s a thought piece. It isn’t a necessary key to look at the other pieces, but I decided it might be useful to log it in the blog… Because that is what the blog is for, right? I also think that in order to put them out into the world I would have to do hundreds in order for them to be rendered nonsensical. Having one makes it too important somehow, and makes the labels immovable. But actually they are not… to me…. 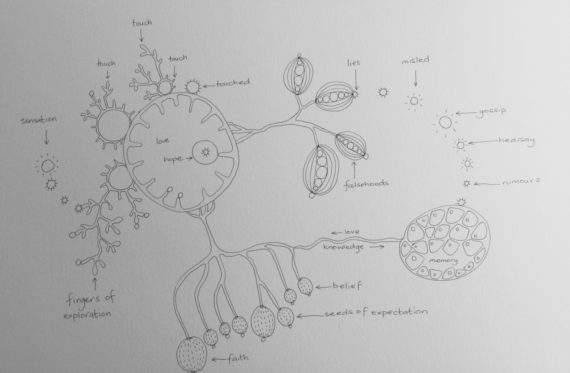 The labels are mere suggestions about relationships between phenomena. They could be different. Or in different places. I drew this because I wanted to get it organised in my own thoughts. I know that all labels are movable/transient. If I did more for other people to see then there would need to be instructions and a legend. And possibly a scale strip along the bottom.
Yes… you see now you’re talking! I wouldn’t have come to that if I hadn’t been writing!
My son (a scientist, mathematician and philosopher) says that geography is just colouring in. This is a joke (I think), but it has always struck me as a “thing” because in school I only did well in humanities and science subjects that allowed the elaborate drawing of diagrams with neat labels. I definitely only got a top grade in biology O level due to my extravagant diagram drawing!
So it comes to this then? I’m regressing? I have always said to my children (and students and anyone else that asks for advice) that you should just pick whatever is the next interesting thing in front of you. The Five Year Plan is all very well but if the getting there is boring then it’s wrong. The getting there bit IS THE THING…. Because what happens if you die in year three? You could have had three years doing interesting things instead!
The places you get to on the way all feed in then, they all become relevant. My love of intricate diagrams at the age of 14 feeds into my current art work. I continue to do the next interesting thing in front of me… Keeping an eye out for interesting detours of course…

So I colour in nonsensical diagrams that to me illustrate and demonstrate the state of human nature and the connectedness of everything.
At the moment I continue until the next interesting thing distracts me…

I might have to make some detachable labels today….

A wibbly wobbly amorphous Venn diagram encompasses my thoughts… It’s animated, so the overlapping portion(s) expand and contract. I often think about the whole of it, the drawing, the stitching, the songs… but it is difficult to do this in writing, so end up having a post that enters the “Now for something completely different…” arena.

Now for something completely different:
Sound and music and songs…
I am about to embark on something solo (ish)… This may eventually include solo performance. Initially though I need to research and collect more ingredients.
When it comes to drawing or textiles I’m pretty much set up. I have a wide variety of materials and equipment to choose from. When it comes to sound I do not. I don’t have enough to play with here. I can’t reach up onto the shelf and select the sound equivalent of silk and gingham, or watercolour and charcoal…

I have on a data stick (unsatisfactorily unvisual) a collection which includes song ideas, lyric sheets, writing and odd bits of recordings. They have an underlying vague theme that (I think) is a working title…
But there aren’t enough ingredients yet to draw them together into something that represents what I want to hear. The library shelves are empty, the shop needs stocking…
My intention over the next couple of months is to NOT write a “song” but to sketch. I will of course note down ideas as they come, but I’m going to delay gratification purposefully until I have amassed the bits and pieces that will enable me to say what I want in the way I want it. I’m also delaying playing and sharing these bits and pieces until I know what I want them to be. The solo thing here is important to me: I know I have people around me that can make these things into perfectly respectable songs right now… But it would be like putting a raw salad into a bowl, when actually what I want is something slow-cooked and developed by me, at least up to the point where I know what I’d like other people to contribute.

So I plan to venture out with my iPad and record the world… Well, at least the small world I inhabit… I want to fill the shelves with interesting materials, so I can do plenty of experimental play before pinning anything down into the structure of a something like a song… 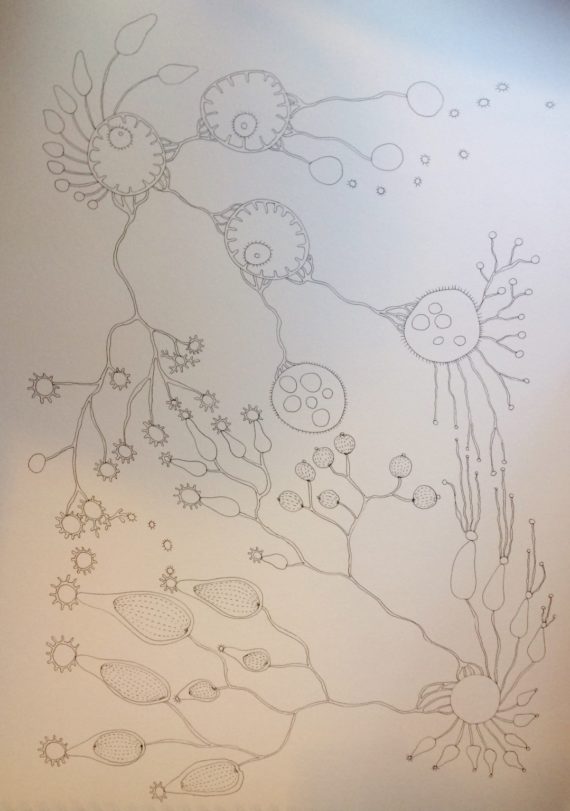 I grub about in the dirt searching for something. I know that what I’m looking for is a nugget of something to do with how people relate to each other – always. It might be parents and children (often), it might be lovers, friends, boys and girls, women and men, strangers, blah blah blah… but I’m always looking for the nugget that illustrates a point, my thoughts about the connectedness of everything.

My friend and fellow artist and erstwhile teacher Jill Hedges told me a tale connected to my recent feminist ramblings and postings on Facebook about the use of language (my connectedness with Jill is spooky and is a comfort and a joy!)

She told me of two boys who were buying toys with Christmas money. They were aged about 6 and 9. The youngest brother was having trouble getting his change sorted, so Jill asked him if he would like help with his purse. The older brother immediately and stridently stated “It’s NOT an purse, it’s a wallet!” Now this is a very small incident, everyday words, everyday situation that might pass unnoticed, unregarded… one might apologise for the “mistake” and move on and think no more of it.

This small difference in word usage is significant. Purse is feminine, wallet is masculine. “How dare you imply my brother uses GIRL things!” I’m putting words in his mouth for dramatic effect, but here is the crux of the matter: purse, actress, knickers, hairdresser, male nurse, lady doctor, and most recently, female drummer and female bass player. The distinction is unnecessary.

I have been accused of making a fuss, being aggressive, or at the least, assertive over such small things in everyday language… but here is the thing… it occurred to me, after hearing Jill’s story that actually I am attempting to be the firewall against the worm:

A computer worm is a standalone malware computer program that replicates itself in order to spread to other computers. Often, it uses a computer network to spread itself, relying on security failures on the target computer to access it. Worms almost always cause at least some harm to the network, even if only by consuming bandwidth, whereas viruses almost always corrupt or modify files on a targeted computer.

So by letting in the small thing, the seemingly insignificant, we are saying it’s ok for the female/feminine version to be lesser. I might not always notice this happening (because I’m getting on a bit and I’ve been conditioned too) but if I do, you can pretty much guarantee I will draw attention to it and call it out. He is a nurse, she is a bass player. Get over it. Both probably have enough shit to deal with and neither have enough money in their purse/wallet.

All of this musing brings me back to my drawings. They are doodle-like, mindful/mindless… one thing infects the next. The worm wriggles across the page connecting and changing the shapes. What has gone before is altered and the mutation repeated. At first I was unaware, but now I am I can’t unsee it. In the drawings (I think) I am in control of what goes unchecked and spreads, how the mutations occur. Sometimes though, I don’t see the connections until I start to use colour, sometimes not until a few days later, and I’m sure there are some I won’t see at all, but perhaps others might?

This is my nugget then: The small and insignificant touches us and in doing so, takes root, grows, spreads and BECOMES significant.

Tell me then, is this too far a stretch from a boy spending his pocket money to where I’ve used pink in my drawing? Am I seeing connections where there aren’t any?