I’ve been shuffling around a certain something in the work. I’ve been glancing at things in the corner of my eye. The stitches haven’t quite caught it and neither has my pencil.
This evening I look back through this sketchbook I have already titled “LOVE IN DANGEROUS PLACES” and I catch a glimpse again and follow it… I turn the pages slowly. It is caught between the pages and lies beneath the drawn lines and between the written words. It is sat there and I recognise it. It is in the liminal. It is in that infinitesimal space between the parent and child, the hand and face, the skin and clothes. It leaves its mark, the attention given by one to another. We crave it. It is what we live for in our small packs. If we are fortunate, it is love and affection and a sense of belonging. But sometimes love exists in dangerous places.

…and that precious, violent attention sits waiting on the threshold between sweet anticipation and bitter dread.
The marks left are both golden and bloodied.

So, it shouldn’t surprise me every time, but it does.
You put work up in a different environment and it changes it.
I’ve just hung up seven of the nine bras from Nine Women in my studio. I would like it to stay up for the Open Studios Weekend, but I shall live with it for a while before finally deciding.
Previously, they have hung in the traditional empty white room. They have space, they communicate with each other. In the studio, they are surrounded by my work, stuff on the walls, the trappings of the artists’ space… Bookshelves, equipment, materials, furniture. Suddenly these women look busy now. Somehow they seem even more present, and part of my space. I have already started talking to them. It will be interesting to see if Sarah talks to them too. (After all, she talks to the pigeons, so she probably will.)

I attach below a few photos, which seem strange to me, it is difficult to make out what is going on, as there is no still, plain background

I also attach a poster of our event, please feel free to circulate this to anyone who might like to come. If you are a blog reader, and you turn up, please do come and introduce yourself, I’ll be there all weekend, and my band The Sitting Room are performing on the Saturday afternoon. 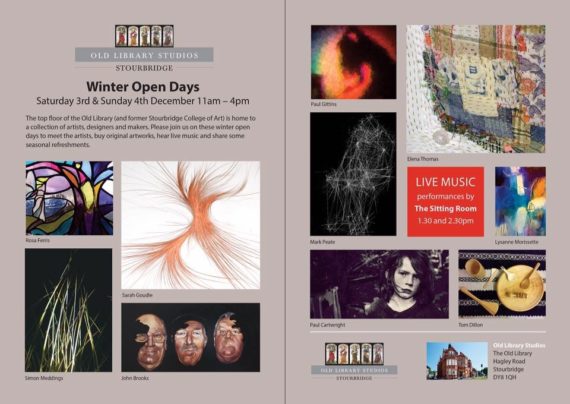 This has been a long break without posting…
Much has happened!

Another two performances came and went…

The first one was on Sunday afternoon on local radio. I’ve done a couple of spots on local radio before, once just chatting about a community arts project, and once for my Nine Women project, which included performing two songs live, with Dave Sutherland on guitar and mandolin. I don’t mind it, quite like it even, as it is in a small room with a few people. I am unable to see the whites of the eyes of my audience, so can ignore them.
Ian Sutherland has done solo spots with this presenter before, so was more familiar. Andy Jenkins, although a veteran of the open mic nights of Birmingham, was perhaps less so. But anyway, we did it, and I think – we think – it went well. I think the songs came across well, there were of course the usual off notes, and missed chords, but these were few, and minor…hur hur… Musician joke…

This is a listen again link, but I don’t know how long our show will be live for….

But what I think did come across was that thing called chemistry. These guys are funny, and clever and we have a good time writing and playing together. Way way way back in the early days of my blog, I had a bit of a rant about artist collaborations, and how, frankly, other artists are a pain in the arse. I expounded the joy of working with musicians instead, and even gave reasons why I thought this to be the case. Over the intervening years however, I might qualify this a little.
Yes, musicians are generally used to playing together, artists as a general rule are more solitary and individual in how the output happens. But… I have been extremely fortunate in that the first musician I worked with was Dan Whitehouse. Those that know him will recognise that this is a special thing, that I have appreciated more and more as time goes on…. Not every musician works in the way he does.

I think I have a sort of unspoken formula. The right people to work with aren’t always the “pleasant” people. I am really grumpy in the mornings, and the last thing I want is someone trying to jolly me along. The people I have enjoyed working with are perhaps the quiet and taciturn… And also people with dry, warped and slightly surreal senses of humour. They don’t allow me to take myself too seriously. They tease, and they are affectionately sarcastic. They are confident in expressing an opinion, and happy to listen to others and consider carefully. The people I like to work with are not necessarily like me, but if we value each other’s worth, that I think is the key. I don’t want arguments, competition, sulking, or egg-shell treading. I want to get on with it. I want to establish a means of troubleshooting before it is necessary, so time isn’t wasted, and I like a set of rules of engagement in a project, or relationship. Everyone has a right to veto if they feel strongly, everyone has a right to persuade if they feel strongly.

But a mutual support, and sense of what each person brings is crucial. Andy and Ian have different musical and lyrical strengths, and different personal qualities. They have been very kind and patient and encouraging with me. Over the last year I have performed more, and more confidently, because I know they’ve got me if it all goes pear-shaped.

Tuesday night was my first ever open mic night, at the White Lion in Walsall… They told me it would be fine, and I trust them. I trusted that they would not have chosen somewhere where I’d be likely to have stuff thrown at me. I trusted that they would choose somewhere where I would be able to sing, and be heard. We sang four songs and it was really good fun, most of the audience were performers, so again, a mutually supportive environment in a not terribly salubrious part of the Black Country! 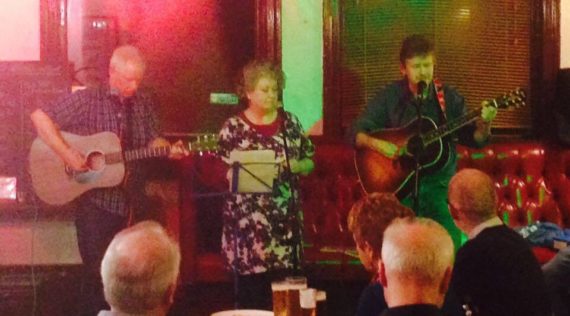 Last night, a very exciting thing happened, we got ourselves a percussionist, the wonderful Lloyd McKenzie. What this means though, is that our rehearsal nights can no longer be acoustic. There are times, when Andy and Ian get a bit excited, that I can’t be heard… With Lloyd added to the mix, I stand absolutely no chance, so I’ll be mic’ed up from here on in. This is actually a good idea, as when I do perform live, it usually takes me a while to get used to how I am going to monitor my voice, and how I’m going to sound… I think being more familiar with singing into any mic is going to help. Percussion gives us a wider dynamic field. We can play/sing really quietly, but now also, we can drive it along with Lloyd, we now have greater depth of tone, a broader spectrum. I’m very excited to hear how the songs develop with this added dimension….

(If you’re wondering about the title, Lloyd tucks a couple of egg shakers down his socks while playing the cajon with his hands…. Of course!)

Enough words for now….
Time for a cup of tea and a piece of lemon shortbread.