My lovely sister-in-law phoned me up, because she had read my previous post and was concerned that I sounded so miserable. I re-read it, and yes, I did didn’t I? Lots and lots of people have expressed concern, and I would like to thank you all, it is lovely of you to be bothered to do so!

I am still physically rather restricted, but have gathered myself together a little, and am now coping with it all in a more dignified, mature fashion. I have stopped having tantrums just because I have to eat my cereal with my left hand.

I have begun to think around the problem too, of making and thinking, and in the long term this enforced period of not-making might actually be good for my brain. I am taking short cuts, and doing small experiments with small materials that don’t require the strength and dexterity of both hands.

I find, thankfully, that my ability to argue with Bo has been unhindered by my injury. Not sure he’s so thankful. So, I am being kept going by the folks around me, and trying to remember to be thankful for small mercies. This is a temporary condition that requires minimal alteration to my lifestyle to accommodate it.

Feel free to remind me to get a grip if I start moaning again.

I haven’t done anything.

I have just sat here moaning.

I haven’t read anything.

I haven’t thought anything.

I am a local expert in moping about and whinging.

I still cannot hold a pen for any length of time, and only the sort that doesn’t require any pressure to write or draw.

It appears my ability to think is inextricably connected to my ability to make. I had thought that yes, a lot of my thinking gets done while I make, but it hadn’t occurred to me that my thinking relied totally upon my being able to make.

I am seeing small improvements, I am now able to move my thumb, I have achieved opposability again. But can’t grip or hold any weight. So still bloody useless. Still off work (a silver lining here, Ofsted have arrived in school while I am off, but I feel guilty I cannot be there supporting my colleagues)

So if I’m not making anything or thinking anything, and I’m being a miserable self-pitying cow, there’s not going to be much to blog about is there?

I am being very irritable with all I live with, and I think my husband thinks I have become mentally unstable. Let’s pray for rapid recovery huh?

Well that’s buggered up my plans.

The theory is I have a cracked scaphoid bone at the base of my thumb. It hurts like hell. I’m not in plaster or anything, but can’t sew, draw, write with a pen, use a fork. Certainly can’t drive. So pretty much most of my favourite means of expression and entertainment removed. Thank goodness for social media, laptops and iTunes.

Bo sent me an image he’d done from a drawing I’d done on an app on my iPhone… yes, still stealing each other’s work. (I’ll post it if he says I can, waiting for a response…) As quite often happens, we seem to have ideas that link, even though coming at them from completely different directions. Having explored the obvious, and the close at hand, working through ideas with bits of muslin, laying foundations as it were, learning the grammar and the vocabulary, I am now in a position to mess it up, push a few boundaries, get bigger, play a little more.

This body of work has taught me such a lot about myself and my working practice. I’m actually more methodical than I thought I was. I have worked through things in a reasonably logical manner. Not taken short cuts, but dealt with ideas as they present themselves either in my sketch book or by making. I’m not sure if this is out of some sort of sense of responsibility to Bo, to make sure I’m doing it “properly”.

It does seem a little jerky though… I head off down a pathway full of enthusiasm, then grind to a halt and need a bit of a prod to set off again. The prod at the moment comes from Bo. Why can’t I do it myself? I know I’ve said it before, but without the crit, I just can’t seem to do it. Even if I disagree totally with what someone has said to me, I need that other voice to enable me to move forward. Is there some way I can learn how to do this for myself?

Anyway, that’s the intellectual exercise that perhaps I can think about while the physical has let me down…

I am desperate to pull apart huge swathes of muslin… starch it, mould it and stiffen it into three dimensional shapes… stitch into it… but that is currently impossible. What I’m scared of is the possibility that the enthusiasm to do it will have worn off by the time I’m physically able to do it.

Got a pile of birthday cds to entertain myself though…

And a couple of old ones that I have on vinyl up in the loft, that I miss listening to: 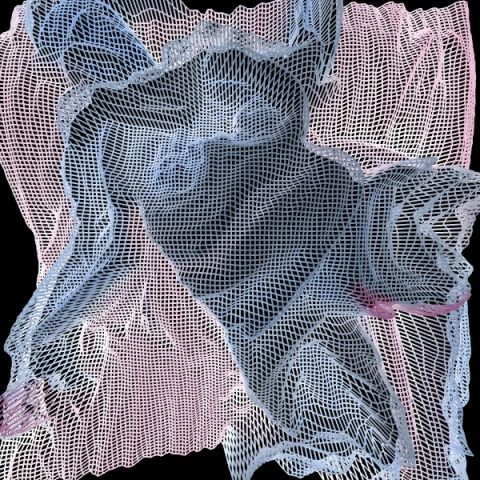 Getting at the truth.

In reading Kate Murdoch’s blog I started to think again about the purpose of the blog. This blog. Initially it was a way for me to talk about my work, to myself, to articulate what it was about, to help me clarify my thoughts. It still is that. But also, like Kate, I have build around this blog a group of people I have never met, who I regard as friends (actually, I have met a couple, and yes, they are proper friends now). The blog is my shared studio, my group crit. The people I am aware of as I write, are my fellow bloggers I suppose, but I am increasingly aware of other people reading. I meet people who ask how my work is going, whether I have resolved certain issues, or if I am feeling well now… I am totally gobsmacked when they say they follow my blog. I am even astonished that my husband bothers to read it. He rarely comments, but he did say yesterday he had noticed that I had stopped even pretending that “my studio” was also the dining room… ooops.

I need to be kept on the straight and narrow. I need to be focused on why I do the work, what I’m trying to get at. I can get carried away with the items I find, the stitching, and lose sight of what I’m trying to say. Having the blog (no, blogs, plural) keeps my critical focus. If I lose my way, I put the questions out there. Sometimes I get comments back on here, on facebook or twitter, or face to face.

Stitch by stitch, piece by piece, I can follow my path, can look back on what I have said, and others have said, and hopefully the path forward becomes clearer – the truth is out there.

So, having initially thought, in June 2011, that the value in this blog would be just as a different way to talk to myself, it has far exceeded expectations.

It is a crucial tool in getting at the truth, as are all the other interactions with my friends, fellow artists, writers, musicians, photographers, collaborators…

If I slip up occasionally and reveal a little too much about myself, forgetting who might be reading, it is a price worth paying I think. The exchange has to be honest, or it is worthless.

I just love junk shops, especially the ones that have textiles and clothing. That might seem obvious given the sort of work I do. The other day I found a new one in Cambridge. I had my son with me… otherwise I probably would have spent at least another two hours in there. Ferreting around in other people’s discarded clothing that has been held in suspended animation for decades probably. What I do is look at everything, literally everything, waiting for it to speak to me. I found one thing… it is pinned up on the wall in my studio now, and my husband says it’s freaky.

It’s a really old bra… all cotton, reinforced with circles of stitching around each cup, but the disturbing thing is that each cup has been stuffed with foam. Totally stuffed. At the moment I am unsure whether I want to use the bra with or without this. I can see me stitching text around the concentric circles, but not sure what. Again, the significance of stitch is blurring the line between my collaborative/ joint work with Bo, and my own work. The stitches on this garment are crucial to its form and function. Bo accused me of “overt interference” as if it was a bad thing! But actually, the accusation is a useful one, that has caused me to think about why I do it…

(he often manages this, goading me into some sort of coherence)

I could go into any of these junk shops, charity shops and so on, grab a few items, any items, then hang them on a wall, or on a mannequin of some sort. The nature of the item means that they would have resonance with people… some people. They would say “My Dad had a jacket like that” or some such comment. And that would be it.

The point is I don’t just grab the first items on the rack. I select, carefully, I listen, fondle the fabric. I note an emotional response to what I handle.

I could then do the same with these items, just hang them up for people to see. The difference here is that I know what they mean to me, but my viewers have the same reaction as they did before “My Mum had a blouse like that”. All I did, for the same reaction, was waste my time looking more carefully.

By overtly interfering, I hopefully hold a gaze for a little longer, present perhaps a more complex item that requires thought, a question… even if it is “That is a perfectly good tweed jacket, why would you wreck it by cutting holes in it?”

My problem, and the point I am always searching for, is the point of ambiguity. Interference, but interference that says as little as possible, to enable those viewing to see as much as possible.

The significance of the single stitch is to be considered… it really is possible to go one stitch too far, one stitch can throw ambiguity through the window… make everything blatant. The viewer then says “oh yes” and walks on… it hasn’t spoken to him at all, and in fact, has spoken less than if I had just left well alone.