BIG has to have a reason.

Students used to say to me after I asked “what next?” “I’m going to do a really big one!” And my next question was always “why?”.

If a piece of work is successful, why do you think it will be more successful just because it is bigger? I’m all for experimentation, but just because something is bigger it doesn’t make it more important. I’m all for questioning the size of the paper (or whatever) we work on. If you are working on A3 just because it is there, yes, try something different. It may well be that it works better much much smaller, or yes, bigger. (With students, I rarely found smaller was where they wanted to go.) But making things bigger just for the sake of it, trying to be impressive…? No.

So why do I work big? What’s my excuse?

Well I didn’t have one. I’m still trying to work it out, but it feels right, and I’m getting closer to the why…

A couple of years ago I was forced to work sketch book size for ages – A5 handbaggable even. Then managed to stretch to A3, A2… but that still felt very contained. And the things I was drawing were also contained within the edges of the page. They became motif-like. Botanical drawings, diagrams of something else.

When circumstances and finances allowed, I went big, desperate to escape the small format. I didn’t know why particularly, except it felt right, and I could. But I could still hear the teacher/mentor inside me asking myself “yeah, but WHY?”

I skirted past it briefly, a glancing blow during Cause and Effect. Something about one drawing not stopping at the edges and the paper just being one part of something more. But that little thought didn’t really go anywhere, it got caught, lodged in the weeds at the edge of the pond.

I’ve also gone on about how I don’t like it if I’m asked about art and philosophers. That crowbarring thing one is sometimes asked to do as part of a course. I’m mostly a really shallow pick and mix person. Ask anyone who had to mark any of my essays. I’d latch on to one thing and say, “Yep! That’ll do!” without digging any deeper. I’m still like that really. But these little bits do help me think about the why.

I liked the Rhizome that belonged to Deleuze. I could see how that worked in myself. I dodge all over the place, doing this and that, thinking about this and that, and something would get trapped in the weeds, as above, until something else came along and added to the thought, helped it grow and set out shoots and flowers. Yes. I can see how that works. I can feel it happening.

The BIG has been bugging me for a while though. I knew I wanted big work, but I was having trouble articulating it. I waved my arms about a bit…

And then, a chance conversation with fellow Stourbridge artist Helen Garbett led me to Tim Ingold. Lines. I’ve ordered the book on the strength of the paper she gave me to read.

Suddenly I am starting to grasp at the reason for BIG.

I need the lines I draw to be bigger than me. I need, like a spider with a web, to draw out the lines to see where they go when they get beyond me. I want the edges of the paper to be beyond my reach. By drawing over the edge, possibly onto the next piece, I am extending the path and the trajectory and the possibilities into uncharted territory. When I draw at this end, the other end is out of focus… I can acknowledge the leakiness of my mind and body into additional space.

When I draw it out into the third dimension with wire, the world beckons… I am exploring further. Tendrils of thought seek out something to join onto, like the growth of my cucumber plants on the windowsill. Curling three dimensional lines. Reaching out and grasping on to pull and support a new trajectory. I write lines on my page, a continuous hand written ink line… holding on to the feint-ruled line….

The materials I am using have changed slightly, and the things I draw have changed accordingly. My thoughts still linger on the cause and effect. One person on one person, one ink line on one piece of paper. But then where? 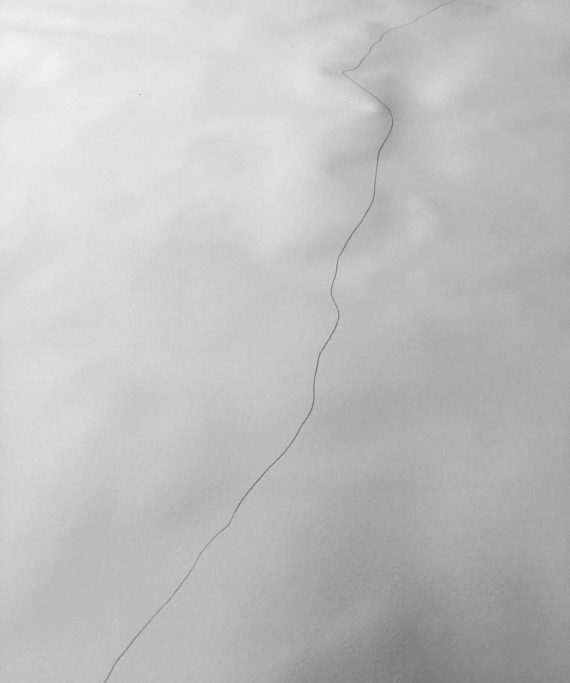 Initially the conversation was about songs. Musically there should be phrases and pauses for thought perhaps, depending on the type of song you write, but the songs I write benefit from a bit of air to breathe I think. I’m not a musician, so I don’t have the vocabulary for that… is it a thing that has a name?

The conversation focussed on lyrics though, and meaning. Specifically how the same set of words can mean different things to different people. This is a good thing. (All opinions here are mine, others may exist.) I like a little ambiguity in a song. A little space for a listener to insert themselves and their own experiences. It’s an investment.

I wrote a song with Michael Clarke a couple of years ago, it might even be three… among the other things we wrote, this one keeps revisiting us in the form of earworms, and visual triggers. It’s a lyric I really like, and he wrote the perfect music for it. Because of this staying power he has decided to have another play with it.

Interesting conversations ensue… is this suitable for a male vocal? Does it need editing to make it so? If so, how much and what?

Interesting not just in topic, but in the tone of it. Michael was gentle in his approach and tiptoed around me a little to start, wanting to respect my writing: “Did I mind? Is it going to be ok if…?” The answers were of course, “yes, go for it. I wouldn’t have given the sheet of paper to you if I didn’t want it touched!” I think what it came down to was that he wanted permission to find the space for himself in it. I would be extremely foolish to say no. He is brilliant, and will elevate it! We always have good chats, me and MC. About life, art, music, people… the result being that there is trust, and therefore plenty of room in this song for Michael to play. It’s not cast in stone, it isn’t a prison, it’s a tree, it can bend and stretch, it’s strong enough to take it, and so am I. I have no doubt he will do something with it that I couldn’t have imagined, and there will still be room in it for the listener.

After the Zooming ended, I put the laptop away and looked at the drawing and thought some more about leaving space.

One of the things I have loved about going abstract is the space. I’m not tied…except by my own fluctuating rules. It’s like I’ve thrown open the windows and doors and invited everyone in. There’s space for everyone to find out what it might mean to them. The words people use are fascinating. They’re different but also, kind of the same. There’s a visual, observed, acknowledged vocabulary common to all.

These things float around in my head of course, undeniably. There’s room for all of them, but there’s also room for me. The point of origin is mine. In the drawing or the songwriting the first point, and where I take it, is mine… for a while…

Over to you, Michael! 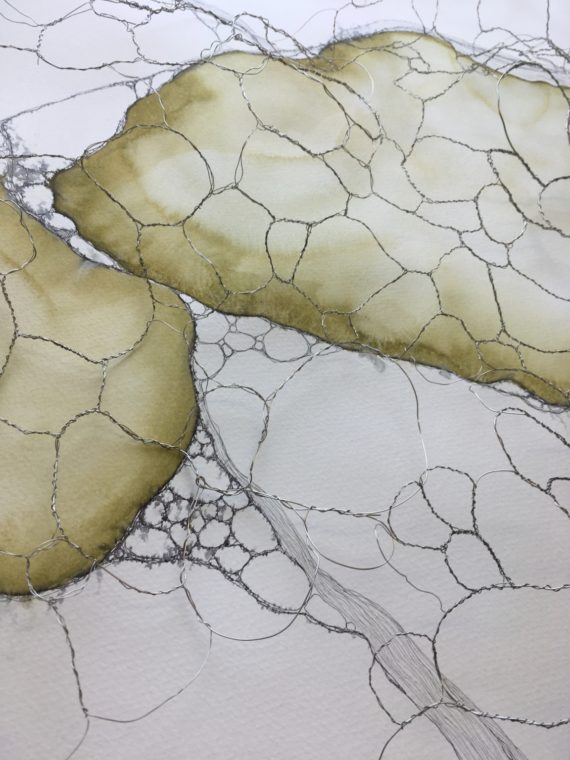 Thank goodness for the internet!

I’ve so missed the conversations in my studio with my fellow General Office colleagues and friends. I’ve missed the prodding at my brain that makes me continue to question. Especially at the moment as I am trying out new ways of working and presenting my ideas.

But I do have the internet, the comments under the blog posts on a-n and on my website.
I’ve been “chatting” lately with fellow long-term a-n blogger Stuart Mayes. I “met” Stuart about 8 or 9 years ago, through the comments on blogs medium, and we have continued. We have met in real life just once, when I was visiting Sweden a few years ago. I cherish the memory of that afternoon in Stockholm. Oh boy, we talked a lot!

Our conversation continues, through the blog world. These last couple of weeks both Stuart and I are looking at our work, looking at what we consider of value in our methods, and should those methods be challenged after all these years. I’m a little older than Stuart, possibly a lot older? Who cares? My point being, we are both mature, established artists trying to keep ourselves going in difficult times. We are quite different people, with very different practices, living in different countries. Despite this we have common ground…

There is something about a conversation that is written under a blog that has real value. It can be referred to and examined, and revisited.

The other day I was looking at your wire drawings on Instagram, I really like them and what struck me was how different they are from, for example, ‘Nine Women’. Looking at your wire work and thinking about other aspects of your practice helped me formulate my own questions about my practice – its intention(s), ambition(s), form(s) and aesthetic(s). If it’s okay I will say something (the thing!) that really helped me – as you seem to have already made the leap that I am about to take – it struck me that Nine Women tells me something whereas the wire drawings invite me to think.

(He said lots of other lovely things I was tempted to paste over, but I must at least try to be modest! Ha!)

The thing is… the conversations we have with other people about our work, and particularly other artists, keep us fresh. Keep things relevant, and keep us checking that they are. By “us” I mean “me”

And, as with the rest of my work, I find that I have rules that govern how I choose them.

I am trying to come up with a title for the project I am working on. This title will be used for my Arts Council application, will probably be the exhibition/event title and may also be the title of a published product… words and/or sounds.

I would be interested to hear how other people choose their titles and whether other people agonise over it like I seem to do.

I want the title to refer to the way I work, or my thought patterns or an underlying theme.

I am trying to avoid the sort of title that I am sure will abound in the post-covid world… (restart, stepping out, branching out etc.)

I absolutely hate those titles that have unnecessary and confusing characters inserted for example [Re:Bōund//] they make me very cross indeed.

I quite like pairs of words “Nine Women”, “Cause and Effect” or single words, short and snappy, not long sentences.

For me, a title of an exhibition, a piece of work, an album… has to hint at what it is, but not be too explicit. A little ambiguity is good, as it leaves room for the viewer or listener to bring some of themselves to it. They look at it in the light of their own experiences.

In other words I make things far too difficult for myself.

I have a list of words on a big piece of paper that skirt about what I’m looking for, but not quite there yet. I shall get out the thesaurus and add some more, then start crossing things out. I’ll get there. Watch this space…