When Laura asked me “What’s the job description?” In the short video she made to launch Drawing Songs, I paused and said “Thinking”… then tried to expand on that one word answer but couldn’t. And it has been bugging me a bit because it was a really good question, and one that after being given funding to do a year’s work, I should have been able to answer less enigmatically!

This week the shape of the answer has come to me. (I’m not renowned for my quick thinking in these matters.)

One of the advantages of inhabiting a studio in General Office, Stourbridge, is the large gallery space, which, when not hosting a show, can be booked and used as a project space. I can hang works up in combination and stand well back to see them properly, rather than being hung on top of each other like they are in the studio. I can also play music in the space and do the aforementioned thinking.

When Sarah and I sat there looking, listening, discussing, it was interesting that every now and again Sarah, or I, or both of us, would be stopped in our conversation by a passage of music. At the time we saw this as an intrusion and a jarring. We took it as an indication that the music was “wrong” in some way.

But that wasn’t right. If the music doesn’t stop us, draw us away from conversation, what is it for? What is its job description? I could argue that unless it is drawing attention to itself in some way, it is failing. Might as well play it in a lift.

The problem is at the moment of course, that the music we played isn’t done. It’s a bunch of sound sketches, haphazard, patchy, it’s not a finished piece of writing of words or music, it’s not been arranged, mixed or mastered. This music hasn’t been curated as a whole piece within itself, let alone as part of the installation. That’s why things jar. That’s why things jump out where they shouldn’t.

My job, as the artist, is to make it work. One piece in particular has brought me to this. I can’t play it to you yet, but it is called Undertaker Bees and it has a jagged, percussive piece of piano (written and played by Michael Clarke) that fits the lyric perfectly, and in itself has informed several bits of drawing. (Having itself been inspired by the recordings of a charcoal drawing) Of course, as a solo piece among gentleness and recordings of ambient sounds, it’s like being hit by a sledgehammer. It is my job, Laura, to decide whether being hit by this sledgehammer is what this song should do, or whether it should sneak up on us slowly before we realise what it is.

I know it’s a bit late, but I hope that answers your question?

In these “unprecedented” weird times, when at all possible, I’ve found its a good idea to embrace the differences, to look for the positives that come out of having to do things differently, rather than bemoan the fact that I can’t do things the way I had planned/wanted.

There’s no doubt that by now, I’d have had a couple of sessions in the recording studio, and would have got a physical thing or two to say yes, done that, tick! We would have had a wonderful time, I know this because we always have. Is it odd that I enjoy being in a very small room not much bigger than a phone box, wrestling with the combination of glasses, headphones, earrings (quickly despatched to the depths of the handbag)?

But Michael’s studio has been closed to visitors for a while now. It is small, but perfectly formed, and in the small gap between lockdown 1 & 2 he commandeered his sitting room to create a separate, video-linked safe space for artists to record, with him in the control room. Brilliant.

But here we are again, unable to do even that for a while.

So what have we done instead? Embraced the unusual, just to see what happened. We have sent files backwards and forwards: sounds, loops, lyrics, melodies, chords, and even a few song sketches too. We have some bones on which to build. It is slow. But actually I am starting to see the advantage of slow.

In the studio with Michael I am a bit star-struck and blinded by the science, flashing lights and scary buttons. I definitely defer. Because he knows all this stuff right? That’s why he is in on this, because he knows this stuff. But here is the interesting thing: given the time conferred upon me by being sent things via email or drop box, I can think. My musical thinking is slow. He knows this and he doesn’t rush me, but still, in a separate studio, without pressure of time, I relax into it more and think it through. I will confess here that I probably listen to things he sends me probably 100 times. Can you imagine how time consuming and tedious that would be? Anyway… away from the time pressure and the embarrassment of feeling stupid and singing out of tune I can be exactly that! In my own studio, after listening 100 times, I can start to hesitantly pick out melody and harmonies from the chords. I can try them out, record them, out of tune mumblings and out of time, until I get it to the point where I feel ok to send him a recording. I have loved being able to do this, to give myself the time, so that when we do get together, our time will be spent differently, possibly more focussed because I’ve already done the workings in the margin. (I’ll let you know)

A few miles away in Kings Heath, I suspect similar things are happening… Michael sent me a photo this morning of him in his studio, with headphones, and casserole dish, and drumstick with adaptations… he has been playing, and improvising, because I had said I thought a bell would be a good idea for one of the songs. While I am listening and mucking about with the words and the singing, he’s walking round his house, bashing stuff with a stick. He has taken on my concepts and ideas and is diving in too. Love it!

I’ve spent years expounding the value of play for children.

Adults need it too.

Never has life been so tangled up in my head and my work.

I’ve always been interested in the touch between people, the physical, emotional, psychological… the effect one person has on another… and now, in its lack we can all feel how much we need it.

It’s in everything I do here in the studio, on my own. That exploring of touch, and its absence. From the stroke of the ink or pencil on the paper, to how one voice reacts to another in harmony… material textures and the textures of sound that take me from one verse to the next.

There is grief and bereavement in every day… for the life we are no longer able to live, to the real tangible grief of lost friends and families. There’s tension. We are stretched and pulled and putting on brave faces and are filled with bravado (at our peril).

I am preferring these old nibs I’m drawing with now. Their path over the paper is perilous. A scratch, a blot, a bleed and a run could happen at any moment. If it were a film it would say “mild peril” on the certificate. The new pens I bought were great, I am still using them, but they glide easily, an even delivery of ink gives them a confidence and a consistent swagger. The old pens were given to me by a friend, the wife of a wonderful art teacher who is no longer with us… his equipment was stored and stacked high, gathering dust. I kept them for ages unused myself until very recently. And now they are perfect. Sometimes they do glide effortlessly over the paper, time and time again, delivering the ink in a steady flow. But much of the time they do not. I feel I am coaxing them into behaving well for me. But I don’t mind if they can’t quite manage it. We are drawing together. They are part of the team. I’ve got dodgy knees. We can cope. 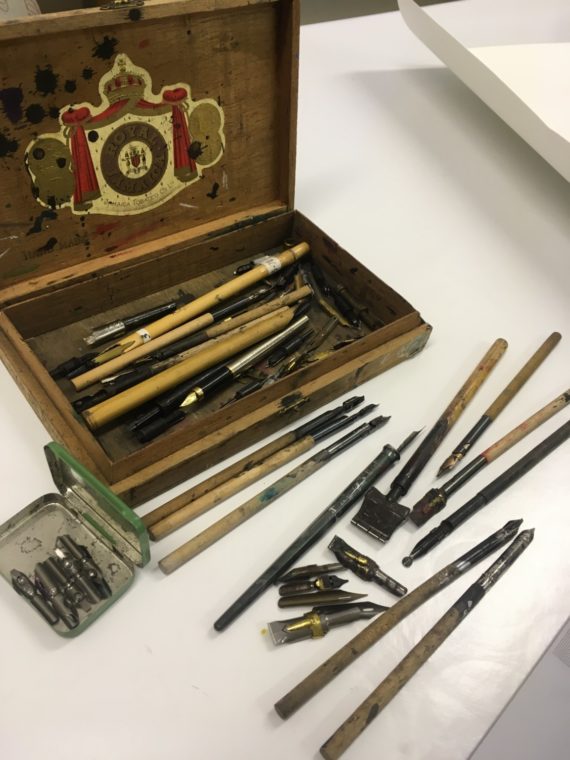