A blog, especially one here on a-n, is not just for other people, other artists, to read, it’s for myself. I have been feeling a little rudder-less, and needed to look back at the process and progress to see where things are going. Sometimes when you look back you can see a clear path, trajectory, or can see that you’ve wandered away a little, taken yourself down a cul-de-sac.

I had another rejection email. This now means that the flurry of panicky-post-MA applications have all gone away. To be honest, that’s a relief. When I came away from the MA I felt free and successful. But these rejections made me feel out of control, judged, and failed. So I’m not doing any more for a while – maybe never. They did my head in. I know that’s the way it goes, I’m not so naive I don’t realise that I have to submit loads to get one positive response but I don’t think this is the way I want to go about things. So I am now – for a while at least – going to control my own destiny, or at least do things that give me that illusion! I am going to be very careful about who and what I say “yes” to. I am going to do what Bo suggested, and do the work, and see where it takes me.

We don’t all have to go about things in the same way. I know that by choosing this path I’m probably not going to make any money. Maybe I’ll do that a different way. Sell some crafty work on Etsy maybe? Or those patch paintings I did?

I’ve not told you what I’ve been listening to lately either. This is silly, because the music, to me and my working method, is crucial. It accompanies my every move and mood. Sometimes it changes my mood. Sometimes it reflects, but it’s always there. This last couple of weeks have been dominated by a couple of people…

http://www.youtube.com/watch?v=q_QEh7nigpc – Peter Broderick, I love this video to this song. Collage of images, text, sound, music, lyrics. Just my kind of thing.

Brilliant songwriters that deserve to be better known. They are helping me get my mojo back. 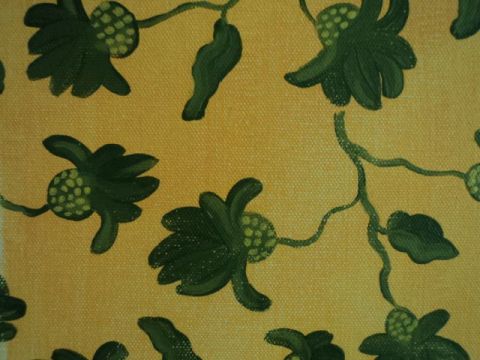 I make a rod for my own back don’t I? Right at the beginning of this blog I was wrestling with how my work should be displayed. Fortuitously, by my MA show, I happened across something that worked for that particular body of work.

I’m now stitching things where they won’t show. Impossible to display as they are.

What I will have to do with these new thoughts is perhaps have them performed. The whole point is that they are secret and undisclosed, but want them to be “flashed” and be seen by the observant viewer.

It’s just not going to work is it? Unless I have someone wearing the garment, and some capable/glamourous assistant saying in a stage whisper:

“Look! He’s got ‘Fuck off’ written in his pocket!”

More conversations and clothes have been in my head over the last few days. Which words belong to which people? The clothes and textiles are the people. Sometimes the text chooses the textile, sometimes the other way round. Sometimes the words hang around in my sketch book / note book for ages waiting. Sometimes I find an amazing garment, and it hangs in my studio for months waiting for the right conversation. Conversations don’t always mean text.

I have got two tweed jackets now. I feel they should chat to each other in some way, but my original search for the tweed jacket was initiated by an idea for a collaborative project with Bo Jones towards the end of our MA course (Bo’s blog is great, if you haven’t read it yet: “The Art of Teaching” www.a-n.co.uk/p/2544868/ )

So will no doubt hang on to these ideas until we can talk them through, but you never know… I might just hijack them if the idea gets bigger in my head.

Another garment is a very small silk slip. It is about 20 inches from neck to hem (can’t be bothered to go out to measure it accurately, not that important right now) and it is cream, hand stitched and blemish free, and about 75 yrs old. It feels important, but fragile. It waits for something very special… I have a vague idea, but it has to brew for a while yet. It has survived a war this fragile piece of silk, so feel that it should say something of that survival. It will come to me. I have a similar silk adult’s garment, I think these two are talking to each other too.

Been writing about fantasy and reality a lot lately too… there’s a lovely embroidered pillow case in my drawer… perhaps I should introduce the text to the textile, and while I’m stitching my dreams and nightmares, I can be stewing over the jackets and silks…

It feels better to be pondering the creative rather than the wording of a proposal, or the filling of a form. Just been reading Jean McEwan’s blog too: www.a-n.co.uk/p/2540360/ about the double standards surrounding artists and money, how we need it, but don’t seem able to talk about it openly, lest it corrupt and defile the work. Can art and money co-exist peacefully?

Some, that start out fairly ordinarily, become the subject of a conversation in themselves. Are the stupid text messages and emails I send (and receive) also part of my practice? The things we send each other to cheer, support, and nurture… some, well most, in my case, are silly jokes, rude words sent timed so they have the highest impact. Sending a string of words to a person who is supposed to be doing something serious is juvenile. But I do it anyway. The more serious the situation, the funnier it is. It is their own fault for opening the message.

Some, push the boundaries of taste and decency and become a bit risky. There is a sort of brinkmanship going on. I am even now questioning whether I should be writing this in a blog, in case I get stuck having to bluster and explain myself. I question certainly, how much should go in the blog, how explicit I should be, I wouldn’t want to get myself or anyone else into trouble would I?

But the fact I am again conversing about the conversation makes it interesting, worth talking about. Where does my art practice stop? Would the stupid text messages not be part of my practice if I didn’t start talking about them as such.

The thing is too, I like to think I can be funny. It can be a failing. Sometimes, I’m really not. I think I can say anything I like, as long as it is funny, or “clever”. Sometimes when I do it to people I don’t know very well, it isn’t taken as funny. Sometimes, I make new friends on the basis that they have laughed at something I’ve said that’s thrown them – that explosive, instant, spontaneous laugh is priceless. (I did it to Bo Jones) (Maybe I should be doing stand up? No.) The children I teach, by the middle of the second term, know that if they make me laugh, they can pretty much get away with stuff. (I’m not sure what this says about me as a teacher).

Laughter is important to me. So why is my work so miserable/spooky/macabre? (other people’s words). It is really difficult to make serious art that is funny… why? You can do anything else… love, hate, anger, disgust, why is funny so difficult to take seriously?

The messages themselves haven’t sparked any further work ideas, but in a secondary way, the talking about them has. I have another few pages in my sketch book of rude, occasionally obscene text scribbled onto drawings of respectable clothes.

I like the concept of layers of respectability covering all sorts of goings on… The business suit over the frilly knickers… rude words and insults stitched to the linings…red hat, no drawers…

This blog is twice as long as usual. It is maybe two rolled into one. Funny, and The Conversation. But I won’t make apologies for this, as to me, at the moment, they are indivisible. 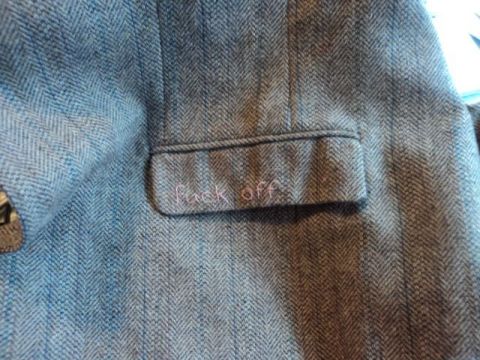 What sort of artist do I want to be then?

Remember me talking about difficult conversations a few posts back? Well continuing emails with a few people have caused me to think. I’ve had a few rejections for proposals and it is somewhat disheartening. I’m told the proposals are strong by various people, but they clearly don’t “fit” at the moment. Do I carry on sending them out to places, or do I plod on doing my own thing with local groups, and possibly hire a gallery to share with a friend and get some work seen? I know some people are a bit sniffy about the gallery space for hire thing, but surely if you choose the right one it’s an opportunity to control how your work gets out into the world.

So what sort of artist am I?

I think I’m clearer about what sort of artist I’m not. I’m not one to do artificial networking in trendy cool places. I’m not worried about being “spotted”. I’m not wanting to do craft fairs/art fairs, even though I could probably make more money that way. I’ve done that before and I find it eats my brain, my heart, my soul. I don’t think I’m going to make any money. I don’t want people to tell me what to do. I don’t want commissions.

I want to do my own thing, have my own thoughts, carry on my conversations, online here, and emails to other friends and artists, the continued conversations, difficult or otherwise. I want to make stuff. I want to band together with my fellow art teachers, protesting about the current state of things. I want to accidentally network with people I find I have an affinity with. I like doing things locally – well, within 30 miles or so.

What do you reckon then? Am I being lazy? Complacent? Avoiding the real issues?