After my formative assessment with Jane 06/05/21, it was suggested I approach my documentation of my installations with a better scope of the space. This is something I have mentioned before and began to approach within my Moving around film. So I decided to re-stage my projections of To Bite B&W Repeat and explore a wider range of angles.

16/05/21: Next I will re-film in the installation room, to play with the contrast, darkness and intensity that was original explored in the first ever projections of Sweet Tooth B&W.

I firstly started off with re filming the documentation of me watching To Bite B&W Repeat, this film has had a lot of attention which was surprising. I wanted to focus in on this and capture more of the space and scale of me compared to the projection. See film below I think this shows the comparison well in relation to me representing the viewers looking around the space, following the movements of the mouth. Repetitive looking motions. It resembles the way you observe the cinema screen, especially with the low placement of the audience. It’s hard finding people at uni to sit and watch these projections so instead I have to use my self to represent the scale and visual. I have recently discussed bringing men into the space to observe the work but due to currently times this may not follow through.

Reflection 16/05/21: Upon reflection we discussed how these films feel they are in a studio. This is what I had in mind to show the space, but Jane mentioned I could edit them to feel darker and more vibrant. See film below, I think it appears much stronger and feels more like an enclosed space like the cinema, with the audience watching.

Reflection 26/05/21: I had some this film above to Catinca for some feedback in relation to the way the work is perceived differently by men and women and Catinca mentioned “Hands Tied” by a group of artists “who discuss their relation to fate, work, pleasure, touch and surveillance” (Another Screen, n.d.) and eating! In the film Eating/The Other, it holds similar elements of consumption but a different tone of feminine power instead of the male dominance, almost as though they’re fighting back. They belittle the men of male control when it comes to date/dinner, sex and the female form.

I have suggested mirrors within one of my digital drawings of which I am unsure of progressing with currently. I thought to trial them within this session and use them as another way to capture the audience/viewers gaze. It then adds the elements of watching being watched and a peep show type feel which me and Catinca discussed in our 1-1 of re-involving. Intruding gaze. Some of the circular mirrors appear as holes in the wall to glance into, where as the main infects one is a mirror reflecting me and my gaze. See below, it almost cancels out the body language and focuses on where the eyes move/go regarding the film. This was interesting to watch back because you often don’t realise where you’re looking. This film invited a new element to the work showing a face/the eyes of viewer which you don’t often see. Feels personal and almost like you’re there watching with this person as I staged the camera in the middle of the projection instead of from afar.

Reflection 16/05/21: After my 1-1 with Jane on 14/05/21, we discussed the film below and Jane mentioned the mirrors needs more exploration. I may need a larger scope of who the mirrors were perceived from afar, but I quite liked this film. It’s another aspect to the work I have been focusing on, the audience. You can see some of the work but the main focus was the audiences eyes, watching. Introduces this voyeuristic aspect to the film. Looking in at someone watching something without noticing. Reflects the way the cinema works with only one viewer.

However, following on from this trip to uni I reviewed the initial digital collage/drawing I created of a space I aimed to create a few months ago below. I edited it to in vision a space I cannot physically make with cinema seats and a perception of having a male audience. As I was sat on the floor in the space, I got a feel for this projection becoming an actual space which presented this cinematic lay out visual. See edited drawing below, the idea of using an actual cinema space by having chairs to sit and watch in would bring a whole new dynamic to the film and it’s portrayal. Especially… 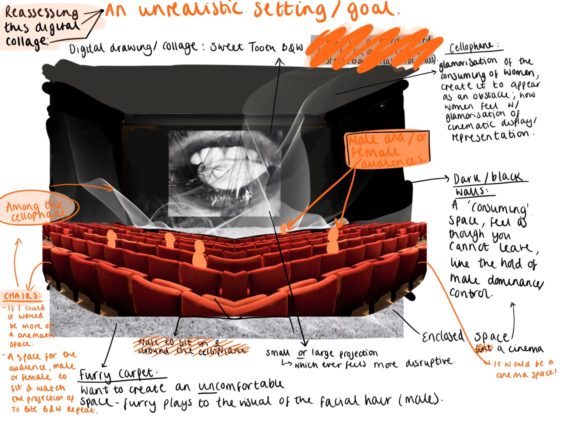 I then chose to create a more realistic plan of the audience and the physicality of the space in the studio, which is what I have followed through with above in my exploration documentation (minus a male). 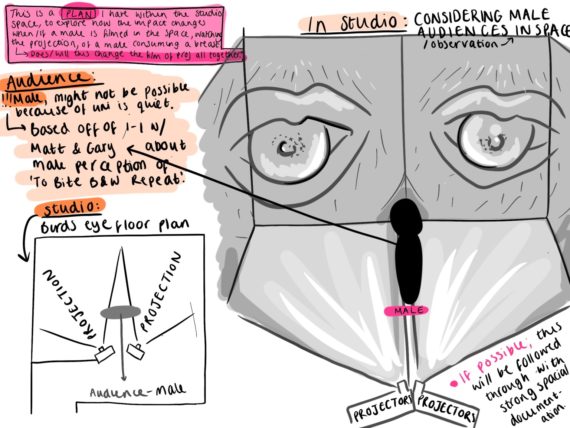 Within the studio I placed the camera to capture different and longer angles, the shorter end of the studio made the films longate the eating mouth, it becomes distorted and quite peculiar to watch. I focused in on my Gary Hill research of using more of the space within the film see below. And from here, I placed the camera at different points in the room to capture the door way and the height of the walls, part of the ceiling and projection. This situates the projection becoming an actual installation which worked really well when I filmed myself watching the projection due to COVID.

Reflection 14/05/21: Within my 1-1 with Jane, it was mentioned I could edit the films darker. Working with contrast, shading and depth, to make the space look less like a studio space with a projection in. However, this was the original aim, to show the space and where the projections etc are. I have although edited these further to focus more in on the work by darkening the space.

My class mentioned about creating a series of works, this is something I am developing in regards to my portfolio. See below, I really enjoy this still of the projection as it becomes about how I as an artist want the viewers to observe my work. I have explore duties further down.

Gary Hill works with a lot of photography of spaces, whereas from documenting Congruous, I learnt that film helps capture more of the space. Jane mentioned my moving around the space film worked well in my previous blog so I wanted to focus in on and bring this to give more depth to the installation for both my viewers and my portfolio. I edited the contrast and darkness within this film and it feels much more like an enclosed space. So, I decided to show going into the the projection and space, it becomes a journey, using the camera as the audiences’ eyes. This was a comment Catinca used when describing her use of film, showing what/how you want the audience to see your work. I brought in the cellophane and documented a clear and longer perception of the work. Focusing on the cellophane, more sculptural element to the projection while moving close and far capturing all of the installation. See below.

Reflection 20/05/21: My peers have really enjoyed this film within my final group crit 19/05/21 and mentioned the documentation of the film gives a real sense of it being a virtual exhibition. The space made the viewers feel as though they shouldn’t be in that room, are they allowed to be looking in? Watching? Shauna mentioned is the cellophane trying to hide what the film is exploring but purposely still showing. Srin commented and said its exploring the ‘affect and the abject’ together. I liked this as this is something I have discussed previously in my work. 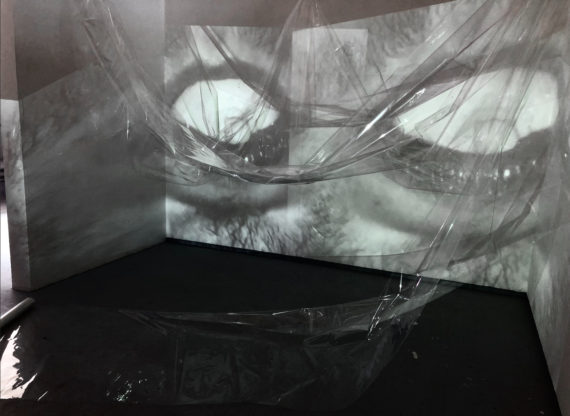