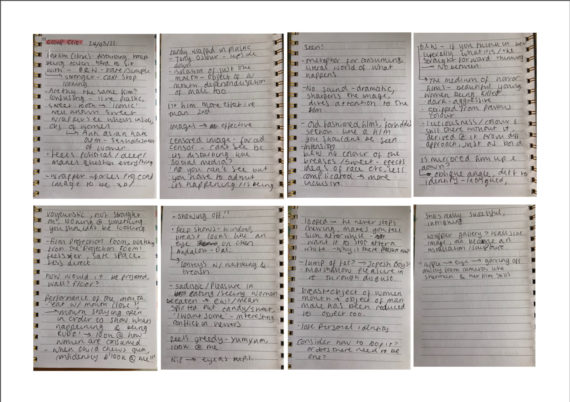 Reflection 21/04/21: This group crit gave me confidence in my projection and work, I felt they were successful but the crit confirmed it form people who weren’t so involved in it. I had continued this emphasis on the cellophane, monochrome and the uncomfortable feeling – trying to deepen this further.

My class discussed the disturbing feel the film gave of the frame being up close to the mouth, was hard to sit and watch a breast being eaten so close up. It was mentioned by Susan that the black and white was just as strong/intriuging as my coloured films/slightly stronger? I was glad to see this as the B&W films/images are completely new. Even though the film is striped from its colour, the “lusciousness is still there without the colour, I derived the lusciousness from another approach” – definitely a path to continue to follow.

My peers said the cellophane suggests the packaging of sweet wrappers, women being wrapped like a treat, a clear message of  sexual objectification. The use of the cellophane on the projection wrapped like a sweet forces the projection to become a 3D/sculpture, more than a projection, adds to the space/work of a candy/breast wrapped in plastic/objectified as a treat. A clear visual for the metaphor of consuming, women being consumed, reflects what is happening in the world still to day! Also feels quite political/makes you question/really think about the sexual objectification women face – I guess it is political, its a battle women feel they struggle against sexualisation/objectification all the time. – Look at current times of anti Asian hate where they’re trying too fight the stigma of sexualising.

Reflection 27/03/21: I have looked at Sarah Everard’s case and relating it to my work made it feel more real, almost putting faces to the women being objectified/abused by male dominance. Researching the current moment of anti Asian hate may intensify this further. Almost makes it feel more upsetting/disturbing.

Reflection 30/04/21: I am unsure how I feel about my work being identified with male violence after regarding my 1-1 with Gary – all about different perspective.

Depersonalisation of the male too, not just the women. I have reduced the male down to an object as well – mouth/beard, women – breast. They have no identity, but are still clearly gendered allowing the viewers to register the simple message of male dominance/objectification. Tony Oursler was mentioned in relation to the isolation of the mouth.

Reflection 26/05/21: Srin mentioned in a recent group crit, that there is a confusion/graduation of who’s gaze is at play here. Swaps from the males POV to the females POV as the breast is chewed, and then changes when its back at the start.

The simple film of the projection may have been more successful than the film of the reflection. – It becomes more impactful viewing it straight on/a cinematic presence! I was so excited to hear these theories/thoughts were reading exactly how I wanted them to through the audience. It was also mentioned they create an old fashioned film like image (!!) its great that this has been portrayed right, interestingly my peers said it also looks like an old fashioned ‘forbidden’ film you shouldn’t be seeing, works well with the feedback ideas of censorship below. This was a new angle and would be interesting to follow through as in a 1-1 with Jane (12/03/21), we discussed the use of researching more pornography and the use/display of women as object of pleasure, may play to the imagery of disturbance/intensity.

B&W film works well with no sound, feels dramatic and sharpens up the images and drives attention to the actions in the film. As there’s no colour of the breasts/mouth available, a peer said it eliminates the race aspect and makes it less complicated/more inclusive. The use of B&W portrays the visual message for what it is, in front of you in black and white/straight forward message – women are consumed/displayed as objects. There’s no room to guess, this is what I wanted! As well as this, B&W suggests the lay out/colouration of horror films e.g. a young beautiful woman being killed by a dominant man, it adds to the aggression of the act of biting/on edge.

Cellophane, in Sweet Tooth Film Still (wrapper) my peers suggested it feels like a censored image. Reflection 29/03/21: This was an area I discussed in my dissertation – the censorship of social media, warning you there may be a disturbing/sexual image underneath before you see it. Or, suggests a cover up what is underneath, you can look but you can’t quite see. Only makes people want to see it more – relates to the cinema and their glorification of sexualising women.

The quick comparison of Reflection and Projection – are they are the same film? Reflection is a flipped upside down and alters the view of abstraction and confusion. Sweet Tooth B&W Reflection, my peers mentioned the mirror as it gave an oblique angle, different to what you normally see, making it hard to identify. It gave thoughts of voyeurism, looking into something intimate you shouldn’t be seeing, or ideas of watching something at the cinema that you’re scared to see straight on, looking at it from a safer space. No direct contact with eye/object. Peep hole?

Reflection 27/03/21: Made me think of projecting on the floor/ceiling/corners of the room – adds to horror like element of something as scary as male domination over the female body. Projected in corner of a room like a scary monster you think you see when you’re younger. Will it make my work sinister, dark?

The display of the film is looped, forcing all viewers to continually watch, he never stops eating, made my peers feel sick after a while and almost wanted it to stop. – Why is there no pleasure now? Consider ways to loop it better, does the mouth ever stop chewing? Or does the breast continually get placed in the mouth? Is there an end? – No end would relate to how women feel under consumption.

Reflection 29/03/21: Referring to my dissertation/research of Maclean’s Make Me Up is almost sickly sweet, watching too much makes you want to stop and this is reflected in the display of Sweet Tooth B&W. They carry similar elements which I want to accentuate – where it’s almost too much.

Analysing the performance of the mouth. When you’re young you’re told to eat with your mouth closed, you grow up to do this so by seeing a mouth chewing open now puts us on edge, in disgust and uncomfortable. Is the male eating with his mouth open on purpose, to show what’s in his mouth (breast). The male does it with ease, as though he does it all the time/greedy/look at me/showing off at how he consume women. – Sadistic pleasure in eating, it feels mean spirited but almost looks pleasurable??? – Interesting element form the group crit, peers said they feel they want some of the candy breast … Interesting conflict from scary/off putting? A comment was made that after a while the breast looked like a lump of fat and not candy, changes to aura of the film a lot weirder. The darkness of the film feels a lot scarier and isolating as the mouth and breast looses their identity. The breast of icing was said to have imagery of the nipple as an eye watching back at the viewer watching you watch.

Reflection 26/05/21: I have now manipulated this film so it loops seamlessly when projected so there is almost no end, ever. Becomes uncomfortable and many peers have said many times they feel as though they miss something if they look away. Compelling and continuous.