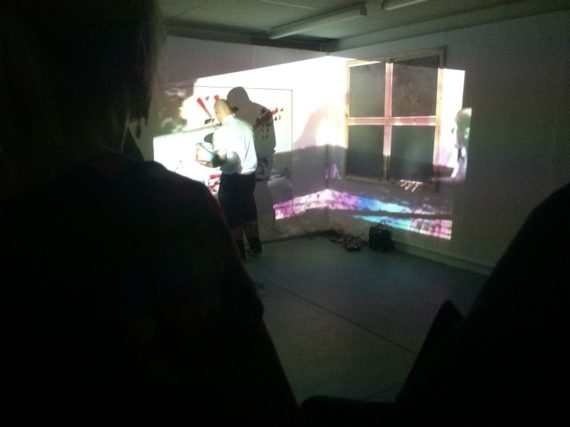 Sometimes it is hard to see what is unfolding as it is in front of us—much easier from a vantage of after. That’s why it is perhaps exciting to see a body of work that is such a strong mix of transitory and ambitious as what was on display at the opening of Teesside University’s MA degree Delicious Edge. If there is an overarching theme, perhaps: our apprehensions regarding a world in transition and our attempts to represent—this moment as meticulous fluctuation and new methods of unfolding the world we inhabit. This is a very exciting (sometimes scary) place to be and if it’s any indication, one might expect big things from the program in future. The opening evening consisted of a series of impromptu and scheduled events in conjunction with sculptural, photography, video, printmaking, installation and sound. For the exhibition Delicious Edge, the course gathered together the culminating work from the MA degree along with others still in process, featuring artists: Martin Bradburn, Amy Brannan, Stu Burke, Ross Cummings, Rachel Dodd, Stephen Irving, David King, and Linda Stannard. The emphasis was decidedly interdisciplinary with improvisations such as sculptural objects played as sound-objects and durational works, alongside works displayed in-situ and in the galleries.

Art offers a means for seeing our world, reflecting upon, but also making perceptible what conditioning has made invisible. In Tom McCarthy’s novel Remainder, an unnamed protagonist begins obsessively attempting to recreate unrecalled memories after suffering an unspecified accident. After receiving an immense insurance settlement it becomes his obsession to attempt to reconcile or make manifest these scenarios for which he has no words and through which he ultimately becomes displaced. In David King’s works, he similarly tries to reconcile existing conceptions, to give them form and reframe, shape, detect the patterns that emerge—in this case King fixates on prime numbers, merging a mathematical mind with that of the artist in order to show something between. As a response to Marcus du Sautoy’s book The Music of the Primes, King’s work challenges basic premises of du Sautoy’s approach, and this is where art excels. Through walls filled with dots and number columns: ordered and rhythmic, even elegant (even if we don’t understand precisely what we are looking at) these compulsions allow us to reorder and make visible something otherwise imperceptible. What emerges is a new manner of notation; sequencing and grouping, it unfolds numbering conventions through the compulsion inscribed and mapped.

Similarly working with ideas of perception and an object’s inability to persist are Amy Brannan’s objects, some of which have been cast in plaster and then submerged in bleach. These pieces become tactile, at once rooted in chemical processes and erosion, but similarly linked to the intimacy of thought. In one, an old photo is printed into a bricklike slab of chalky white plaster adding dimension, place-holding, on which the snapshot of a girl smiling, enacting something with her hands, floats on the plaster surface as a sort of shipwrecked memory.

In counterbalance to these works Stephen Irving performed several impromptu sound pieces over the course of the evening—one in which he paints across a wall that has been rigged with contact mics and the resulting rumblings and scratches are then fed through an intricately manipulated progression of synth and effects upon which he performs—another a dissembled antique copper boiler with a small spinning metal ball is swirled by the artist, creating a droning, rumbling, metallic wall of sound with surprising detail. On a nearby wall a disused condom machine is commandeered as an apparatus for dispensing USB drives containing the mix-tape of the artist’s performances. In an age of digital streaming and online media there is something appealing and tactile about the clunky mechanical apparatus of a vending machine for digital media. It is an appealing toggling or daisy chaining of technologies and recently artist Gustav Metzger observed: “In computing, daisy chain refers to multiple linkages of electronic devices. In our struggle, against mass extinction, the daisy will become a widely used symbol.” Perhaps harkening back to a more hippie past with the idea of the daisy, here the resolutely mechanical has become amalgamated and toggled with the overtly digital, to subvert and put this linkage on display (albeit in slightly absurd or prophylactic manner).

In a similarly performative vein, Martin Bradburn’s contribution for this exhibition takes the form of a large, almost reliquary-like tableau into which the viewer emerges. At precisely seven-thirty the work was triggered for a crowded room of observers, witnessing the simple mechanism as large burlap bags full of sand are cut and the contents slowly trickle down into receptacles below. These structures become overburdened by the shifting weight over time. In the room, four rudimentary human forms huddle near the corners of a large bedlike dais-platform upon which a figure reclines. Each of the four figures grasps a receptacle that collects the sand falling, but beneath the container are twin blades that as they are weighed down cut into the fabric platform that suspends the central figure. As the ‘performance’ begins the mechanisms behave in pleasantly unpredictable ways—one’s arms quickly overtaxed drops down quicker than the others, cutting the fabric, but then after a few moments detaches and the arms abruptly jut back to the upright position—another sees its sand dispersed slightly to the side, fans out and takes almost three times as long for its lowering operations to take place. What was fascinating was for those twenty-ish minutes, a crowded room full of observers strained to hear the barely perceptible sound of falling sand in a dim room. 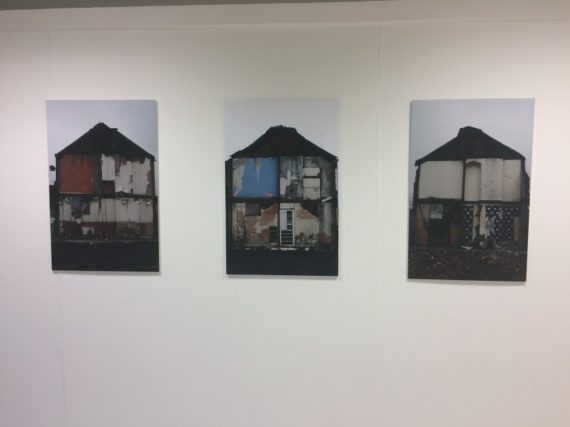 Linda Stannard’s work has the hand-hewn presence of the artist’s trace. Her prints measure as artefacts of processes in transit alongside a series of photos of demolished houses, which appear oddly formalist. Recently the council razed an entire section of homes adjacent to the town centre in order to make room for…er… what appears nothing in particular. Linda’s photos document the site’s unsettling ability to persist in face of the occupant’s removal and absence. What we see in her documentation is the clearly delineated blocks of rooms in relief—most with painted quarters, stairway outlines, or floral wallpaper still intact—as entire sections and partial terraces have been knocked down stranding these interior spaces strewn across the exterior walls of the remaining houses on the terrace. Remaining: upper left imprinted as a square in Boro red; right of which is the remaining square torn white (magnolia?) wall and an outline of a fireplace; downstairs a chair-rail divides the rectangle of wall horizontally; another is a sky-blue squared front bedroom with a still intact built-in shelving units. The effect is somewhere between a Gordon Matte-Clarke dissection amidst an inverted Rachel Whiteread House, in which a council serves as initiator and where the details of daily life are put on display as remainders of what has been displaced.