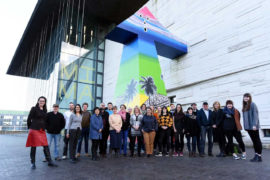 The following conversation with Graeme Durant took place as part of his participation in the Critical Perspectives at Teesside University Fine Art. Durant’s work work was the subject of a major survey exhibition at Baltic, Newcastle, UK and at Bloc Projects, Sheffield. For the […]

Critical Perspectives at Teesside University has announced its first round of visiting artist and curatorial talks for the season. The aim of this series is to begin conversations around new directions in contemporary art and practice, as well as examine […]