Forgive me if you already know this story, but a few people recently have asked how I met Dan Whitehouse…. and the story has grown recently. So it’s a story of serendipity and coincidence well worth re-telling.

Late 2009 or early 2010, My friend Briony and I went to a gig… as we quite often do. It was The Miserable Rich at the Glee Club in Birmingham. She said I’d like them. I did.

We sat down with a drink and a bag of salt and vinegar crisps, shuffled about in our seats, arranged coats so we could sit on them, that sort of thing. The stage in the small room at Glee is not really much of a stage… just a space at the front that all the seats point towards, but it is a great music venue, and I urge you to try it!

A man with a guitar ambled to the front and said good evening to us… it felt as if it was just to me and Briony, but I’m sure he meant all the others too. It was Dan Whitehouse. We didn’t know who he was.

He then proceeded to perform a most amazing set of songs. The sort you snuggle into. His manner with the audience was great – relaxed, dry sense of humour, self-deprecating charm as he regularly retuned his guitar. We loved him! (This is him at the same venue, a while before the one we went to)

During the interval, I went back to the bar, Briony went to stand in the queue to buy his CDs… a set of 3 EPs really, a set for each of us. We got back to our seats, I divvied up the drinks and snacks, she divvied up the CDs. The Miserable Rich were brilliant too… have a listen…

A couple of days later, loading the CDs into the laptop, and then the CD player, I discovered that one of them didn’t work.

I ferreted about and found an email address and asked for a swap.

He of course said yes, details were exchanged and that was that.

Then a couple of days later I had another email from him saying “I LOVE your sheds!”

My website address goes out on the bottom of my emails…. and he had gone ferreting about too!

He asked if he could do some video involving him singing in one of them. At this point, the only sheds I had done were other people’s, in gardens, on allotments, they were full of rat poison, sharp implements and rotting manure, so it wasn’t really feasible… but we continued the conversation. He still had no idea who I was, and we hadn’t yet met! On March 13th 2010 (I can place it this precisely because it was my 49th birthday) I dragged my husband along to another of Dan’s gigs in Wolverhampton, and at half time, sought him out and introduced myself. As we spoke I could see cogs whirring, and my own mind span with ideas… it appears I had met a kindred spirit. Over the next few months and in various coffee shops, Dan and I decided to make a shed for him to sing in. We designed it, I had the basic thing made by a local company, and I covered it in fabric and we arranged a little event around it. 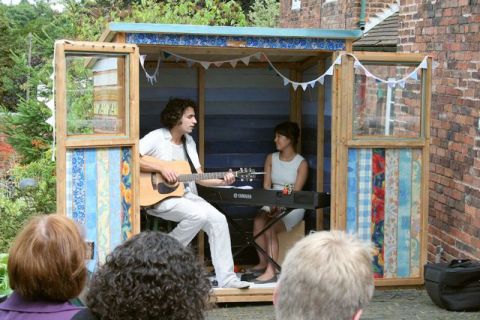 This little event has grown each year, and attracted more and more amazing musicians and songwriters. I am proud of our little shed. The event is now called LOAF (for Life and Other Arts Festival, name thought of by Dan) and happens in Stourbridge in July… when dates are confirmed this year they will be posted all over the place.

In the intervening years, we have both done stuff, and followed each other’s progress. We’ve had coffee, drinks, chats online…

When I was doing my MA, I decided I wanted to find a lullaby, and enlisted Dan’s help to find something, and asked if he had something suitable… but he suggested I write my own. So I did.

The one that I used, that now sits on Soundcloud, bears the origins, lyrics and very basic top line of melody that I wrote, but grew over the months, imperceptibly, to be the thing that stands there now. My First Song. Aided and abetted by Dan, who produced the whole thing beautifully, translating my waving arms and arty-bollocks into the thing it became.

I was heady with it! I can write songs! Who knew???

He also helped me with the recording of the song “Keep Calm” for my final show… which built into a marvellous thing, and I even had the nerve to perform it, in a stripped-down, accompanied only by a pair of scissors version, for the assessors.

I cannot help thinking that without meeting Dan, my work would be very different today. But I love how I work now, that I have a sense of fate about the whole thing, that we were meant to meet, to enable me to grow in this direction.

I had met other musicians before, and even more since. But Dan really “gets” me. Somehow he knows EXACTLY what I aim for. But then he pushes it further. He has come along a completely different path to me, but we have coincided here. He sometimes seems so much older and wiser than me, I think the music industry has made him that way. I am naive and optimistic and I have no idea what I’m doing… I think I’m about 18 years older than him, but it often feels the other way round. His guidance and advice is invaluable.

There are many factors that lead up to my application to the arts council for the project we are now about to embark upon. I have no doubt that without Dan’s name on the form, it wouldn’t have been so attractive a proposition. He has a rapidly building track-record. This month he has an album review in the Sunday Times, has had increasing local and national radio play, his gigs are critically acclaimed sell-outs… on Sunday we are off back to the Glee Club to see Dan play – in the BIG room – for the end of his new album tour. He will still chat in the same amiable way. He will still spend a while tuning his guitar. As I’ve got to know him, I have come to realise this is out of respect for his art, and respect for his audience. The songs need to be heard at their best, the audience deserve to have his best. He is a perfectionist… but with a respect for raw creativity… a rare combination!

There has been imperceptible growth for both of us in these four or five years. But when I look back, it’s a little bit like when you meet the children of friends you haven’t seen for a while… when the cute little blond boy has turned into a ginger-bearded 6’5” hulk with a voice like gravel and whisky.

I’m not so naive any more… perhaps…

Dan is perhaps not so cynical any more… perhaps… when I told him I’d got the grant, he said I’d changed the way he thinks! Maybe I’ve rubbed off on him too? (After all, the edges of people don’t stop at their skin)

Whatever the imperceptible changes have been along the way, the two people who will sit together surrounded by Apple products and instruments and improvised percussion and microphones on 3rd January, are rather different to the two people who wondered if it was actually possible to build a flat pack shed and make a gig happen wherever it got put together…

I am so excited. We are going to have such a lot of fun making this thing happen.

And when I spoke to Dan just last night, and we made a bit of a shopping list, he said, in his flattish Wolverhampton/Birmingham tinged soft voice. “It’s gonna be good, e.”

(I can’t bear to think about the possibility that Briony might have ended up with the duff CD….)

Quite a few posts back, on Threads, I told of how my mother used to call me “A Contrary Madam”.

https://www.a-n.co.uk/blogs/threads/page/4
(you’ll have to scroll down a couple of posts to find it)

I am, by nature I think, A grasshopper and a butterfly… not a lot of stamina for seeing through the ideas. This is perhaps not a thing to admit when about to embark on a 12 month funded project, but bear with me…

I have to try REALLY HARD to be organised. It doesn’t come naturally. I have to bolt it on when required. I suppose at least these days I recognise the requirement…

So I am at the same time, both organised, and disorganised. I have compartments in my head that never speak to each other.

I am very nearly finished the off-black bra. It needs a little bit more twinkle, but it’s nearly done. But more pertinently perhaps, even though the physical bra isn’t finished, the idea is. I just have to realise it. I also decided at the beginning of this project, that I should wire each bra as I finished it, because otherwise to just be left with the wiring of nine bras to do in June would be a nightmare, boring, soul-destroying etc.

But, the idea is done, so my brain has moved on.

While I carry on stitching sparkly thread to this one, what I really want to do is see how my next idea will work. I stitch faster, to get it done.

I want to bandage the next bra.

Oh it is wonderful! It has managed in its lifetime, to get both grey and yellow. Deodorant has stiffened and blackened the underarm sections. The joy is that it was a Marks and Spencer special… not much Magic and Sparkle here. Elastic is perished, so a different sort of frilly… twangy bits of lycra have pinged out of the jersey fabric. There is, I’m sure, a make up smudge, although it has been washed, it is a stubborn stain.

Why do I love this so much?

Why am I totally besotted by these women?

Why is my mind racing with pictures of their lives?

I have to stitch faster, so I can get onto the next….

I am lucky to count among my friends:

I know women who have changed their lives at the drop of a hat for the benefit of others.

I know women who look after their children on their own, have a job, and be an artist… who must surely have more hours in their days?

I know women who have no idea how beautiful they are.

I know brave women who have fought a fight.

I know women who care for others, through their own illness and injury, and the only moan is an occasional rant, so full of insight and humour it humbles me.

I know women who are artists through and through, but they don’t know it.

…and in amongst them all I sometimes feel like I’ve let it all go for a selfish whim to make stuff and spout about it. But this project I embark upon, is my little nod to them, better women than I.