I’m going to explain this project in terms of how it came to me, as a slow-burn, unfolding, enlightenment. It developed from the purchase of a vintage bra from a junk shop on Mill Rd Cambridge, to this mammoth year of work I see before me.

The purchase of the bra was probably about two years ago. It was a strange beast, made around the mid forties I guessed, and the shop owner thought it was a good guess, this carefully constructed, engineered garment was sturdily stitched. A garment of function, not flirtation.

It was in amongst a tea chest full of dressing up clothes that included a belly dancing outfit. It was stuffed with foam pieces crudely stitched in around the cup edges. If it had been in a different place, I might have assumed it to be a post-operative mastectomy bra, but because of the context in which it was found (I was assured it came as a job-lot with the belly dancing outfit and various other somewhat theatrical items) I assumed it was a man-dressing-up-as-a-woman bra… as had the shopkeeper. This bra sat in my work room at home for quite some time, with and without the stuffing. I did some embroidery on it, but it never quite worked really. The item itself is really fascinating to me though. It started a train of though that has stayed with me and picked away at my brain. 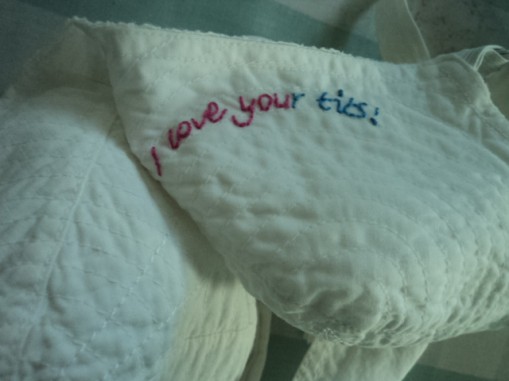 Sliding forward to another conversation about a year ago, the thoughts had started to coalesce into this narrative about a middle aged woman, and the state of her bra. I had been doing a body of work about respectability.

About 6 months ago, another conversation about these mythical women was happening. By now I had become somewhat fixated on bras and started asking my friends and yes, I have to be honest, the occasional stranger, about the state of their underwear. They wouldn’t dream of going out without wearing it, whatever state it was in, but it would be the first thing they whipped off when they got home after work! A friend works in a food and clothing bank and she was laughing at me and said something like “You should see the state of some of the bras that get donated… we chuck them into the rag bag!” …….. WHAT???? 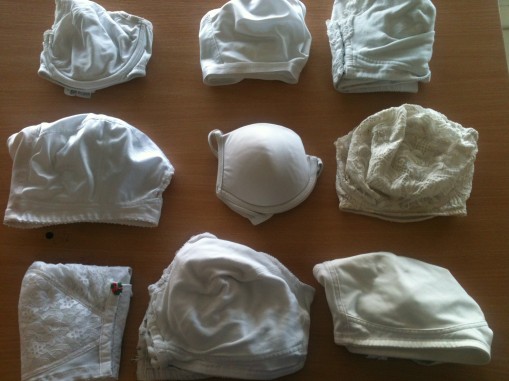 So now I had nine women to think about.

I have another friend who is a bit of a history geek… I could hear her anorak rustling… “oh just like the nine muses…hahaha!”

In the deep recesses of my mind, I vaguely recalled the Greek mythology, but she refreshed my memory, happy to pass on the details. So now I had my framework: Nine Contemporary Muses. I would look at these nine women’s garments, re-invent their lives, tell their stories, make up their songs.

They hold, at some level, aspects of myself perhaps. But as I have said in another blog, a long time ago, the more personal the work, the more universal it is.

I have in my head a large installation, the nine bras, taking on a very sculptural presence in the gallery. This holds no fears for me. But also in my head, these nine women have nine songs. Left to my own devices the discrepancy is vast… The textiles I know I can produce to a very high quality. I have skills! The songs are another matter. I can write a few words, and I can hold a tune on a good day. I have a bit of a way with recorded ambient and domestic sounds, using them as music, as I don’t play an instrument… but I have friends who do…

“Crewe” (there’s much wrong with this, and right I suppose, or I wouldn’t have put it out there… it may well end up being one of the nine songs, but not quite like this…)

For this to work really well, something has to happen. I have to learn so much… I have to get my act together, write, record and produce these songs so they sound really good, like proper songs, not bathroom operatics or karaoke down the pub. For this I need help. For this I need Dan Whitehouse and a bunch of other musicians, and a lot of studio time… Thanks again to the Arts Council, because now, I have what I need to make it happen.