Forgive me, reader, for I have sinned! It’s been ages since my last confession… I mean blog post…
(Same thing some days)

I’ve posted a couple of things on Threads, but not here. I do like to keep this just for this project, and the more general stuff gets posted on the other blog.

So… The casual observer might think it’s because I’ve not been doing anything. That couldn’t be further from the truth! Alongside family outings, painting gallery walls, and doing the small bit of a proper job I’ve been given, I have in fact been writing songs, recording, and planning a couple more bras… But I am waiting for them all to arrive back from far flung corners of the earth, so I can review, before I move on…. Because, I have actually forgotten who they are! Terrible sin! (Hence confession)

We are getting closer to the end of the recording process, which is both exciting, and sad, in equal measure I would say. I can’t wait to have nine songs, finished, produced, sequenced…. All set to go in the studio, with the installation. But I must say, the process has been the best thing I’ve done in years. Thank you Mr Whitehouse, it’s been fab… But I mustn’t say goodbye quite yet, it’s really not over till this fat lady sings!

Last night in the studio was a tricky one. We are down to a few niggly jobs now. We do have Dave Sutherland coming back in to record some mandolin, and possibly more bass, and also Helen Lancaster coming in to play some violin and viola for a couple of songs. It’s one of these that’s causing the niggle really. It is more complex in its production I think than many of the other songs. It is more unusual in structure perhaps, is a little more theatrical. I want to send Helen a decent recording before she comes in, but at the moment, I sit here with three different versions trying to decide which one is the best, so I can re-record the vocal before sending off.
By niggly jobs I mean things like removing my heavy breathing from one of the tracks where I sang rather closer to the mic, up close and personal. It sounds like I have some sort of condition… these are bits of housekeeping almost. 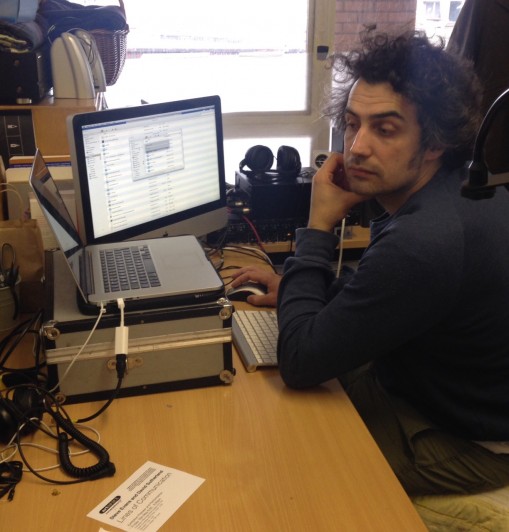 I have a problem… I have twelve songs, from which I am supposed to choose nine. I have dropped one, but can’t decide which two others will go. I shall of course decide at some point, but I am currently trying to think of a way to include eleven songs into a project called nine women …shall I just sneak them in and hope no one notices, or cares? I may well decide that these women deserve to be heard and not cut them at all! Or perhaps choose the two that might start the next project, rather than choose two as “rejects” from this one, as that does seem a more positive way to go about it.

I also have a list started, of songs that can be done live on the PV night…. Oh dear…
Dan will be supporting me, playing and boosting me into a state where I can feel I can do it. Up to now, I have done one song at a time at the songwriters’ circle end of term shows. For these events I have my lyrics on a stand in front of me, and for one song, I have practised over and over again. I’ve done it, but it takes a lot of work. For the PV, I could possibly do six of the songs live. Some I’ve done before, they are simple and fairly straightforward, but some I’ve never done live. It would be excellent if I could do these without the bits of paper… No excuse and no barriers between me and the audience. With this in mind, we have booked a few rehearsal spots between now and July. I’m told by Dan, like exam revision, better to do a few spaced out rehearsals leading up to the event, rather than last minute cramming that will wind me up!
I will try my best!

Right, well as it is 1:00am and I have another eight hours in the studio tomorrow, I am going to try to get some sleep, but I have these lyrics running around my head…..

You must know what you have started
Life has changed since this began
I couldn’t back out if I tried
I’ll stay right here if you don’t mind?