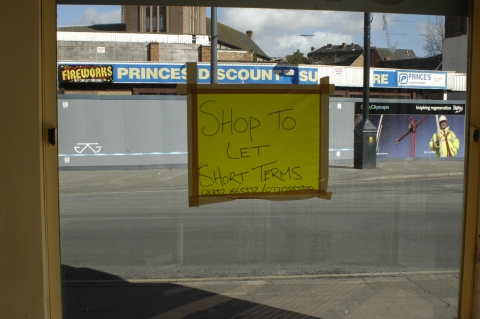 Its Friday already. Meeting last night. We are a truly clever collective. Despite the wine and hilarities we get the jobs done – and no-one falls asleep during the grown up bits.
Julie (West) has made a plan of the building so the curating (collectively, obviously) is underway. The plan is a work of art in its own right so we are going to use this in the interpretation in some way.
So far it has just been us, the artists, discussing and planning. The wider picture is starting to emerge as we work on publicity.
We have been approached by at least 7 other people to place work in the show and word is getting round that the building is going to be used. All this was up for discussion last night and we agreed the show is now formed. As it's site specific to add to it would almost be cosmetic and not integral.

There's a bigger issue of how we are received in Derby. Although NO PARKING has no political agenda we are making a statement by merely occupying the empty shop. Opening a can of worms so to speak…………

Not much has happened this week. We get the keys – fingers crossed – to number 2 cheapside next week. Meantime I have been having fun with the piece thats going in on the ground floor. I was getting cross with the lack of space in my studio so if we get in to the shop next week I will be able to let rip.

It would be good to get the publicity and invites out the way, also getting to the bottom of health and safety and licencing for the opening will help the cause. I wonder if the infamous Alleged gallery ever bothered with public liability………….

Having scoured Derby for the right building we have all fallen for the delightful number 2 Cheapside. It suits us perfectly. We are so enchanted with the space and all begin behaving like potential newly wed first time buyers from a Doris Day movie. We have decided on a date for the opening, 15th April.

This is not really that far away for those making site specific work but on the other hand nothing can focus an artist like a bit of pressure.

The main purpose of this NO PARKING show is to highlight – in a subtle way – the incredible, growing, amount of empty shops in the city. As we enter 2 Cheapside for the very first time the imprisoned smell of damp being released is testimony to the absence of life in these spaces.

The building almost breathes a sigh of relief at being shown some attention. So does the landlord. We couldn't have wished for a better bloke to deal with. He is interested, accommodating and supportive. Watch this space to see if the honeymoon period lasts…….

I am currently obsessed with drawing and its critical stance. Â Recent work has been based on responding to sites with visual conversations about mark-making.