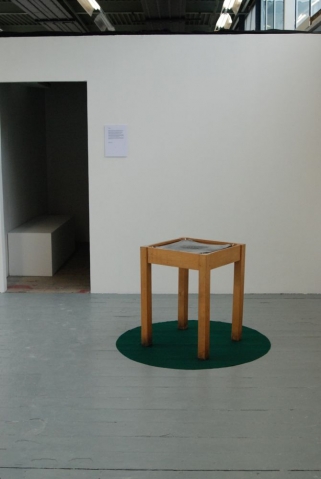 Opening night went well. I'd never been to an opening night before, and it was really busy. I managed to hear the prizes announced, and I went to see a couple of people's work, but didn't get round much more on the night itself. I did go round later in the week. It was really good to see other people's work – because we've all been so busy we've not been over to painting to see their stuff, and they haven't been over to see ours.

One interesting note was my with my table piece – it was supposed to have a real mess with your mind quality. Can I walk on the baize or not? Is it a perimeter or a playing surface? Wow, that really messes with my head, what an amazing bit of art, and so on. But there were so many people there that the baize just got trampled. I had to replace it with another piece the following day. It still gets walked on regularly, I have to clean it when I switch the video work on in the mornings.

Apart from feedback forms, several meetings and the actual event itself.

Got my baize delivered and cut – ellipses, ovals, circles and semi-circles. Got the black out blind over the video space, nice and tight. Tried out the tables – I made about 13 altogether and left a few out because they didn't look half as good as my drawings.

So we got rid of loads, perfectly reasonably, and ended up with about 4, and that looked strange too. Also, this was all done without the baize, because it was too dark, too rich, didn't gel with other people's work or the building.

So I'm showing one table, but it does have baize, which I'm pleased about, and it looks right, it works. But the whole process was really exhausting, dismissing so much work in such a short space of time. It's all worked out fine and it looks okay, but it felt strange.

And it's my favourite table, but I made it about 5 weeks ago. The final set up for my show is as it was over a month ago – I've got a photo of it all set out and I liked it then but thought I'd try out some other ideas too. 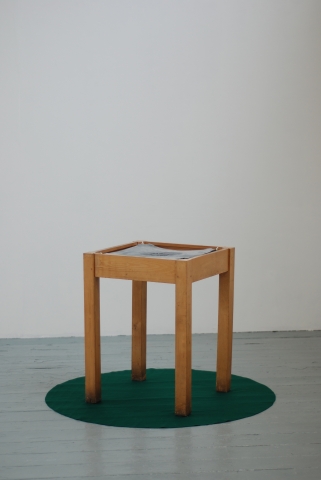